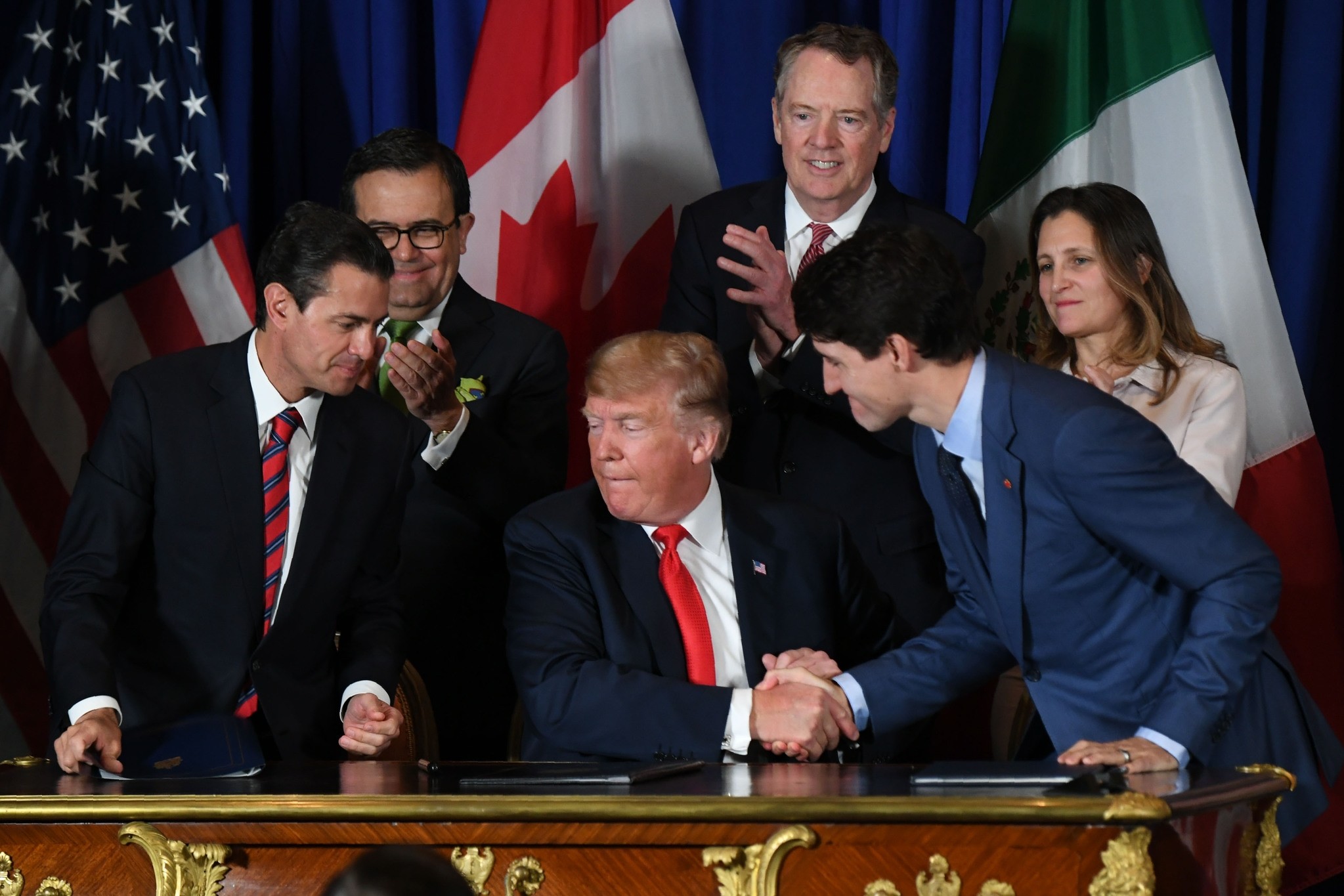 The leaders of Mexico, Canada and the United States signed a North American trade pact on Friday after brinkmanship over the final details of the deal continued through the eve of the signing.

They agreed on a deal in principle to govern the more than trillion dollars of mutual trade after a year and a half of acrimonious negotiations concluded with a late-night bargain just an hour before a deadline on Sept. 30.

Since then, the three sides have bickered over the wording and the finer points of the deal and still had not agreed just hours before officials were due to sit down and sign it as the G20 summit kicks off in Buenos Aires.

Legislators from the three countries still have to approve the pact, officially known as the United States-Mexico-Canada Agreement (USMCA), before it goes into effect and replaces the North American Free Trade Agreement (NAFTA).

Canadian Prime Minister Justin Trudeau's spokesman only confirmed his attendance late on Thursday. Before signing the deal he continued to refer to as "the New NAFTA," Trudeau told Trump the two should continue to work together to eliminate steel and aluminum tariffs.

Trump had vowed to revamp NAFTA during his 2016 presidential election campaign. He threatened to tear it up and withdraw the U.S. completely at times during the negotiation, which would have left trade between the three neighbors in disarray.

Trump forced Canada and Mexico to renegotiate the 24-year-old agreement because he said the existing pact encouraged U.S. companies to move jobs to low-wage Mexico. U.S. objections to Canada's protected internal market for dairy products was a major challenge facing negotiators during the talks, and Trump repeatedly demanded concessions and accused Canada of hurting U.S. farmers.

A side letter to the September agreement showed that Trump preserved the ability to impose threatened 25 percent global tariffs on autos while largely exempting passenger vehicles, pickup trucks and auto parts from Canada and Mexico.

"It's been long and hard. We've taken a lot of barbs and a little abuse, but we got there," Trump said of the pact.

Legislative approval is the next step in the process, but could prove to be a difficult task in the United States, especially now that Democrats – instead of Trump's Republicans – will control the House of Representatives come January. Already Democrats and their allies in the labor movement are demanding changes to the agreement.

While Trump hailed the revised trade pact, Trudeau was more measured, saying there was still work to be done and calling on Trump – using his first name – to remove steel and aluminum tariffs the U.S. imposed on Canada and Mexico. Trudeau also referenced recent downsizing by General Motors in North America as a "heavy blow." Trump did not mention the job losses.

The signing came at the front end of two days of tough diplomacy for Trump. On the top of his agenda is a Saturday dinner meeting with Chinese President Xi Jingping. which will determine if the two can ease escalating trade tensions.

Overhanging the summit in Buenos Aires, the Argentine capital, is a trade dispute between the United States and China, the world's two largest economies, which have imposed tariffs on hundreds of billions of dollars of each other's imports. All eyes will be on a planned dinner between Trump and Chinese President Xi Jinping on Saturday to see whether they can make progress toward resolving differences threatening the global economy.

Beijing hopes to persuade Trump to abandon plans to hike tariffs on $200 billion of Chinese goods to 25 percent in January, from 10 percent at present.

"We hope the U.S. can show sincerity and meet China half way, to promote a proposal that both countries can accept," Foreign Ministry spokesman Geng Shuang told a briefing in Beijing.

Trump faces a series of diplomatic challenges over the weekend, most notably whether he can strike an agreement with Xi.

Before departing Washington on Thursday, Trump said he was "very close" to reaching a deal with China but added "I don't know that I want to do it because what we have right now is billions and billions of dollars coming into the United States in the form of tariffs or taxes."

The U.S. began hiking tariffs on Chinese goods earlier this year and Beijing has responded in a tit-for-tat fashion, sparking tensions that a full trade war could erupt.

Trump increased additional duties imposed on Chinese goods this year from 10 percent to 25 percent next January. The U.S. president also said he is considering levying extra tariffs on another $267 billion worth of Chinese imports should Beijing retaliate.

With his "America First" approach, general distaste for multinational deals and habit of insulting allies, Trump typically gets a mixed reception at global gatherings.

Trump has slapped tariffs on the European Union, pulled the U.S. out of the landmark Paris Climate Accord and the Iran nuclear deal and suggested he might be willing to pull the U.S. out of NATO if member countries don't significantly boost their defense spending.

Ending the NAFTA would have meant tearing up the continent's closely integrated auto supply chain. But Ottawa, Mexico City and Washington have now agreed to sweeping changes to manufacturing and labor requirements that U.S. officials say should boost wages and discourage moving production offshore.

The deal will require that 75 percent of auto content be made in the region, increased from 62.5 percent, and that 40-45 percent be made by workers earning at least $16 an hour.

Mexico also agreed to continue to recognize U.S. auto safety standards, unless Mexican regulators conclude they are inferior to their own standards.

Trump has threatened to use a national security justification to impose steep tariffs on the hundreds of billions of dollars in autos the U.S. imports annually. But the USMCA includes side letters that agree to exempt Mexico and Canada up to a threshold of 2.6 million vehicles a year, as well as an unspecified amount of light trucks, and tens of billions of dollars in auto parts.

However, the new deal does not resolve the punishing steel and aluminum tariffs imposed worldwide earlier this year, and on Mexico and Canada since May.

Canada, which guarantees prices for its dairy producers through its managed supply system, agreed to open its borders a little wider to American milk, cheese, cream, butter and other goods.

The concession from Ottawa removed a major sticking point that Trump said was a deal breaker. Canada will also eliminate categories of low-cost dairy goods and will allow greater imports of U.S. chicken, eggs and turkey.

The U.S. agreed to Canada's insistence that the dispute settlement system – formerly known as Chapter 19 – remain in the deal. Canadian officials resolutely rejected Trump's demand to scrap provisions to resolve disagreements through international arbitration, something Ottawa has successfully used to challenge U.S. tariffs.

However, the agreement does make some changes to the more controversial "Investor-State Dispute Settlement" powers, which critics said had allowed powerful companies and wealthy investors to invalidate local laws and court decisions through unaccountable arbitration.

The new agreement requires that signatories allow equal copyright treatment for writers, composers and others from member countries, requiring a minimum term of the author's life plus 70 years for copyrighted works.

When NAFTA took effect in 1994, e-commerce hardly existed in its current form and modernizing its provisions was a key premise of the talks. The new agreement prohibits customs duties for digitally distributed goods like software and games, e-books, music and movies.

It would also limit local governments' powers to force companies to disclose propriety source code or place restrictions on where data may be stored.

Tucked in the agreement is a provision that appears designed to stop either Canada or Mexico from seeking a better deal with Beijing. If any signatory seeks to enter into a free-trade agreement with a "non-market-economy" – read China – the other parties will then be allowed to cancel the three-country deal and replace it with a bilateral agreement.