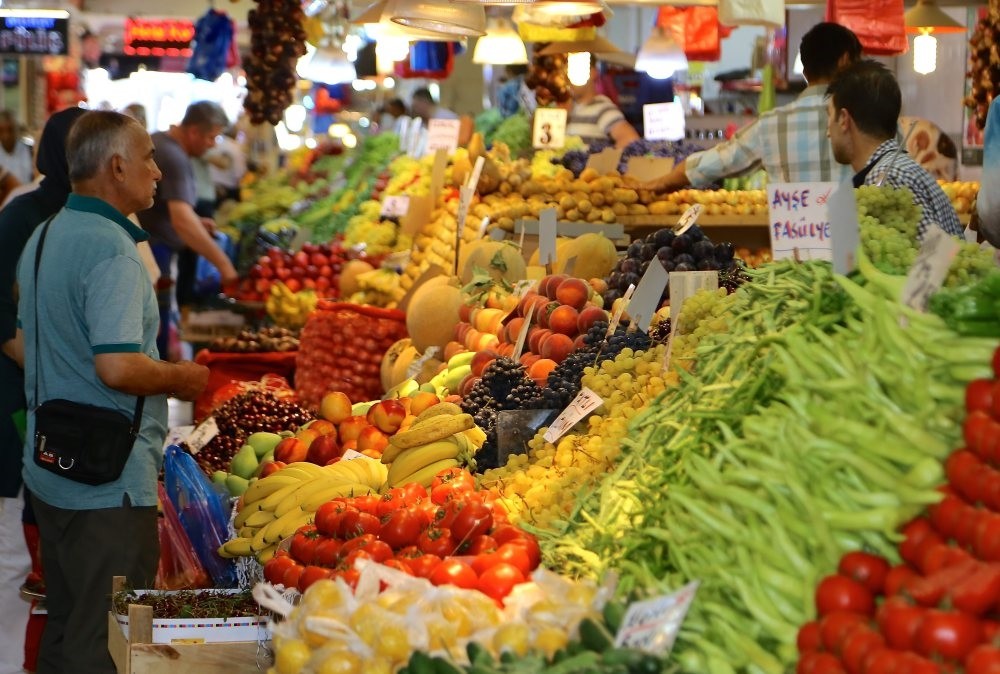 The spike in the Turkish lira, tax cuts and government-initiated campaigns have ensured improved inflation data in November. The downward trend is expected to continue as Turkey tries to reach its year-end target of around 20 percent

The markets had been waiting for yesterday's inflation figures, as they were focused on a fall after 17 months and saw the peak in October. Running inflation was particularly driven by a volatile Turkish lira and soaring oil prices. However, a commitment to the right monetary policy, tax cuts, and nationwide anti-inflation discount campaigns launched by the Treasury and Finance Ministry led to a 1.44 drop in November's inflation, beating expectations that forecast a 0.64 drop. Year-on-year inflation stood at 21.62 percent in November, data from the Turkish Statistical Institute (TurkStat) showed yesterday. Annual consumer prices reached their peak in October, hitting 25.24 percent. Treasury and Finance Minister Berat Albayrak (L) said on his social media account that a major fall in inflation has started and the trend will continue in the upcoming months.

"The November consumer prices figure has proven the success of the steps taken in the aftermath of September inflation and the Full-scale Fight against Inflation program," Albayrak said.

The minister also drew attention to the 2.53 percent fall in the producer price index, which came at 38.54 percent in November. "The economic rebalancing will continue in December and we expect to catch the forecasts for 2018 explained in the New Economic Program (NEP)," he said.

The minister pledged that the economy administration will continue to carry out necessary structural reforms next year.

As for the components of the inflation, transportation prices lead the fall, with prices decreasing 6.46 percent as food and non-alcoholic beverage prices fell 0.74 percent, the data showed. The producer price index fell 2.53 percent in November for an annual rise of 38.54 percent.

Inflation has eased as the Turkish lira recovered in recent months after a massive 6.25 percentage point rate hike by the Central Bank of the Republic of Turkey (CBRT) in September and an improvement in relations with the U.S.

After hitting a low of around TL 7.2 to the dollar in August, the Turkish currency has steadily recovered to stand around TL 5.15 in Monday morning trading, down more than 26 percent this year. Oil prices have also helped the inflation ease, along with tax cuts in durable goods and furniture.

After trading at 5.15 against the dollar following the announcement of the inflation data, the Turkish lira tumbled against the greenback, lowering to 5.22 in the afternoon session. The fall in the Turkish currency stemmed from the pressure of the oil prices. Lowering below $60 last week, Brent crude prices were trading near $62 per barrel yesterday due to the news of the U.S.-China deal that delayed the imposition of import tariffs by 90 days. Moreover, the markets are also expecting a 1.3 million barrel per day cut in the supply at the Organization of Petroleum Exporting Countries (OPEC) meeting in Vienna on Thursday.

The Full-Scale Fight against Inflation Program was launched in October by the Treasury and Finance Ministry. As part of the program, Minister Albayrak announced a new set of measures to fight inflation and boost investor confidence.

Among the measures announced to curb inflation was a campaign of minimum 10 percent nationwide cut on prices. The measures also include no increase in electricity and natural gas prices until the end of 2018. To support businesses and maintain investments, the banks will decrease interest rates by 10 percent on loans issued after Aug. 1, Albayrak said.

Commenting on the inflation data, Integral Investment Securities Research Director Tuncay Turşucu stressed that if the perception of a permanent fall in the inflation solidifies, more powerful and positive impact of exchange and interest rates will be observed. He highlighted that the spike in the Turkish lira has boosted the fall in consumer prices.

"The impact of the tax cuts is not possible to disregard, of course. We observe very easily the price fall in durable goods, which came thanks to the excise duty cuts in October. We will also see the positive contribution of the hiking lira in December data," he said.

He also predicted that the inflation might close the year around 21 percent with the continued discounts on durable goods and automobiles in addition to year-end sales. He recalled that the monthly inflation was recorded at 0.69 percent in December 2017, and this year, the figure may be lower.

QNB Finance Investment Chief Economist Burak Kanlı pointed out the possible interest rates cuts by the central bank, expressing his expectation for a cut in interest rates around March and April next year.

Hiking and stabilizing lira, a slowdown in domestic demand, tax cuts and improvement in the prices of the unprocessed food have all led to a significant decrease in inflation, beating forecasts, Kanlı underlined. The QNB economist also emphasized that the fall in the inflation will continue in December and the year-end rate will hit below 21 percent.

"In the first half of 2019, inflation will hover around 20 percent but in the second part of the year it will be lower thanks to the base impact," he added.

Erkan also expressed that the central bank will retain its tight monetary policy due to inflationary pressures and will keep the interest rates steady until the second half of the next year. The normalization process will begin in the second half as inflation will edge lower.