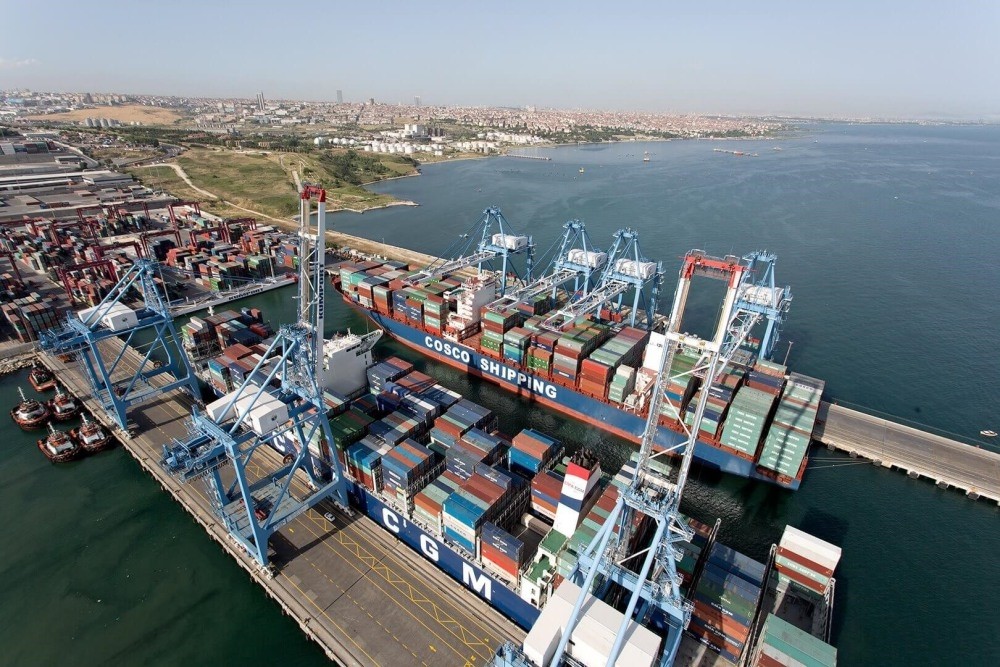 In the wake of successful performance throughout this year, Turkish exports are expected to reach the target set by the government and close the year with a record high of $170 billion

As Turkey looks to drive its economy mainly by exports, the country has gone through a successful year so far, as it is expected to post an all-time high in exports by year-end.

So far, Turkey's exports have hit all-time monthly highs several times this year, namely in March, October and lastly in November. The government expects to reach the year-end export goal of $170 billion noted in the country's New Economic Program (NEP), which was announced in September.

It is one of its main goals to create an economy with higher value-added and high-tech products in its exports portfolio.

Trade Minister Ruhsar Pekcan said Friday that Turkey will continue to break export records through the end of the year. "Turkey's exports in November were the highest monthly figure ever" at $15.5 billion, Pekcan told Anadolu Agency (AA) in the capital Ankara. "We will increase this and close 2018 with a record," she added.

The exports-to-imports coverage ratio rose to 96.3 percent in the said month, up from 69 percent in November 2017. On a yearly basis, Turkey's foreign trade deficit fell 90.5 percent to $604 million last month.

Furthermore, preliminary figures showed that the country's 12-month rolling export volume also reached a new peak of nearly $168.1 billion, with a 7.8 percent increase. In the first 11 months, exports increased by 7.7 percent to $154.2 billion.

According to the Turkish Statistical Institute (TurkStat), Turkey's exports hit an all-time high of $157.6 billion in 2014. They amounted to nearly $157 billion last year.

Looking at the first six months of this year, Pekcan said that there was an increase in exports despite the fact that the exchange rate was not very volatile. He added that the upward trend will continue but to ensure continuity, they have to include branding, design and technology.

The Trade Ministry has selected some countries, which constitute 55 percent of Turkey's foreign trade deficit, as export target markets for the upcoming period, she said, adding that they have prepared a road map.

In a new action plan for trade covering 2019 to 2021, the Trade Ministry is looking at increasing Turkey's export and investment opportunities in several countries, including China, Russia, Mexico and India.

Speaking of the use of local currencies in trade, on the other hand, Pekcan said that Turkey has made mutual agreements with Russia, China, Iran, Azerbaijan, Bosnia and Herzegovina, Qatar and Kuwait for the development of trade with local currencies.

Although still new, there is a significant increase in the trade with local currencies, the minister said.

Pekcan previously noted that the number of countries Turkey exported to and imported from with the Turkish lira reached 174 and 110, respectively, as of November.

She stated that the volume of foreign trade conducted with Turkey's local currency in November totaled TL 10.1 billion ($2 billion), of which 47.5 percent in exports and the rest was imports.

In addition, Pekcan noted that the ministry has put on the table the problems of all stakeholders related to trade with their solution suggestions with the consultation board they established with civil society organizations. She added that the ministry's main purpose was to pave the way for businesses and therefore to collaborate with other ministries.

"We protect our producer-exporters under the rules of the World Trade Organization. Accordingly, we take various measures," Pekcan said.

"The ministry aims to give prominence to quality and increase the number of exporters, especially in the field of technology," the minister added.

Meanwhile, Türk Eximbank will have supported Turkey's exports with $44 billion by the end of this year, according to Pekcan.

The minister emphasized that Türk Eximbank's goal is to further increase the share of small and medium-sized enterprises (SMEs) in loans.

"The share of SMEs has increased from 61.5 percent to 69.5 percent this year. The increase rate of SMEs in Türk Eximbank loans is about 30 percent," she noted.

The number of companies that the bank currently provides loans and insurance for is 10,849, out of which 7,500 are SMEs.

Since Türk Eximbank was founded in 1987, it has supported export credit, buyer credit, credit insurance and guarantee programs aimed at developing economic and political relations between Turkey and other countries.

"Currently we have five Turkish Trade Centers in 15 sectors. Our new aim is to open centers in 35 more locations," she said.

This September Turkey inaugurated a trade center in London focused on ceramics and marble, Pekcan said, adding that the current trade center in Moscow will be reworked to better showcase Turkey's fresh fruits and vegetables, which returned to Russian markets earlier this year.