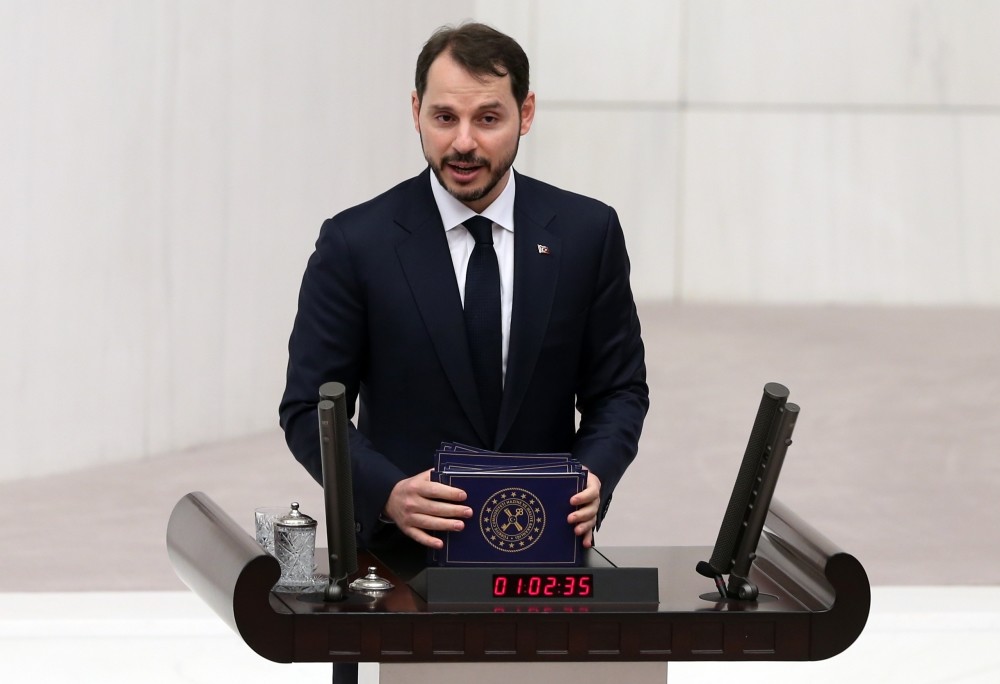 Treasury and Finance Minister Berat Albayrak speaks during his budget presentation at Parliament, yesterday.
by Daily Sabah with AA
Dec 11, 2018 12:00 am

"The 2019 budget will be the major supporter of a stabilization period under the new economic program," Treasury and Finance Minister Berat Albayrak said during his budget presentation.

Albayrak said austerity measures will be among the most prominent features of next year's budget.

The lion's share in Turkey's 2019 budget was allocated to education with TL 161 billion ($30.5 billion), Albayrak added.

He stressed that 21 percent of total tax income will be spent on education.

Albayrak further noted that Turkey's current account deficit was expected to drop below $36 billion in 2018.

According to latest data from the Central Bank of the Republic of Turkey (CBRT), the country's current account surplus totaled $1.83 billion in September, improving from last year's deficit of $4.4 billion.

With regards to inflation, the minister assured that the fight against high prices will continue and the impact will be seen in December, as observed in the November data. He recalled that as a result of the expansive campaigns of tax reductions and falling domestic demand, the annual inflation in November dropped by 1.44 percent and stood at 21.62 percent.

Minister Albayrak also referred to the global growth reports issued by Organization for Economic Cooperation and Development (OECD), International Monetary Fund (IMF) and the World Bank, where they revised the growth estimates for 2019 downward due to geopolitical risk and tightening financial conditions.

"The trade tensions that have started to increase since the end of the first quarter of this year, the tight monetary policy of the U.S. Federal Reserve (Fed) and strengthening dollar have led to a drop in the capital flow into the emerging markets," Albayrak said and continued, "The declining trend in capital flow into the emerging markets will continue in the upcoming period."

Considering the slowdown in global growth and the economic risks worldwide, it is vital to prevent any exposure to geopolitical risks emanating from volatile changes in the capital flows across the globe, the minister remarked. In that regard, he added, the government will take steps to reduce the costs of debt collection and boost the confidence of investors and consumers while ensuring stability in exchange rates.

Next year's public finance will support fiscal discipline and fight against inflation as well as structure and social needs, the minister emphasized.

"Fiscal discipline is defined as the anchor of the New Economic Program (NEP). We will keep the ratio of the budget deficit to the gross domestic product below 2 percent during the fiscal year," Albayrak said.

The budget deficit last year was 1.5 percent and this year it is expected to stand at 1.9 percent. The ministry expects that it will fall to 1.8 percent next year.