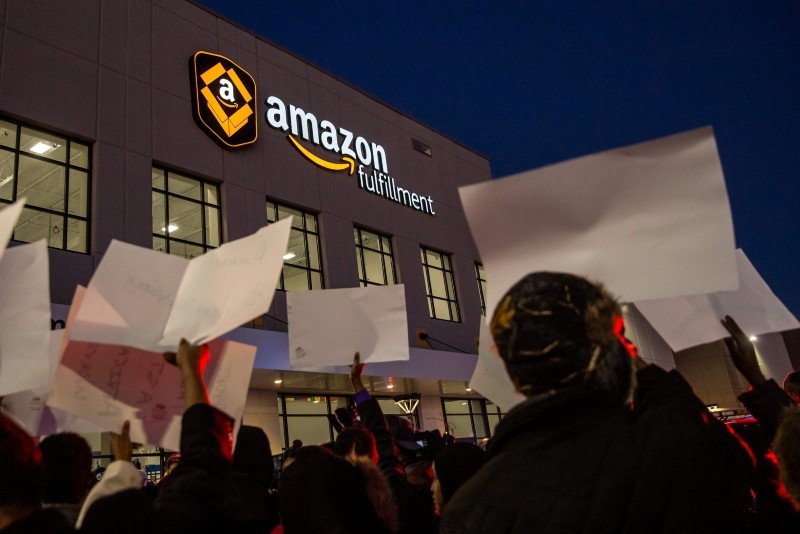 Demonstrators shout slogans and hold placards during a protest at the Amazon fulfillment center in Shakopee, Minnesota, on Dec. 14, 2018.(AFP Photo)
by Daily Sabah with AFP Dec 16, 2018 12:00 am

Across the United States, online retail giant Amazon – owned by the world's richest man Jeff Bezos, is facing escalating demands from workers for better conditions and calls for unionizing, in addition to opposition against a tax-break plan by the State of New York to relocate company headquarters to Queens.

A group of Somali refugees resettled to Minnesota who now work for Amazon in the Midwestern state demanded better working conditions Friday during a protest outside one of the retailer's warehouses.

Hundreds braved frigid temperatures to demonstrate outside of the Amazon warehouse in the Minneapolis suburb of Shakopee -- home to a sizable Somali immigrant population from which Amazon has heavily recruited.

The protest was the latest effort by the workers, who say East African immigrants make up a majority of the workforce at the massive warehouse but go unheard.

"We don't have rights in the company," worker Abdulkadir Ahmad, 30, told AFP.

The workers, many of whom are practicing Muslims, say the required productivity rate is too high, the company is unconcerned about worker injuries and that the conditions don't allow practicing Muslims to pray as they otherwise would.

"We do not have enough time to pray. There is a lot of pressure. They say your rate is too low," Ahmad said.

The workers timed their protest during the busy holiday shopping season, hoping to force the online retailer to make changes.

They already have had some success. Amazon says it has offered accommodations such as providing prayer mats for workers, converting a conference room into prayer space during the Muslim holy month of Ramadan and approving shift transfers for fasting workers.

"Additionally, we've continued to hire and develop East African employees. We're a leader in this space and we feel really good about our record here," Amazon spokeswoman Shevaun Brown told AFP via email.

The company previously agreed to meet with workers to hear their concerns. The New York Times reported that it was the first known instance of any group succeeding in forcing Amazon to negotiate.

But workers say Amazon's efforts so far have fallen short.

"We are appreciative they've sat down and talked with us, but we are not seeing real action," activist Abdi Muse said.

Muse is the executive director of the Awood Center, a union-backed non-profit that organized the protest and helps East African workers in the state.

Demonstrating workers and community leaders who joined them in support on Friday say conditions at the warehouse are leaving people with serious ailments.

"When workers leave Amazon, they still live with the back pain, chronic illness, and hurt and harm caused during their employment," said Ahmed Anshur, the imam at the Al-Ihsan Islamic Center in the nearby state capital of Saint Paul.

Protesters said they want the multibillion-dollar company to give back to the struggling community that has been a major source of its workforce in the Minneapolis area by giving money to a community fund to help struggling immigrant families.

"It's not a handout or a donation," said Mohamed Omar, imam at another Minneapolis suburban mosque.

"This is so Amazon can give back into the community a portion of what they have taken so much of."

The retail giant has faced past complaints from warehouse employees about working conditions.

It has more than 100 "fulfillment centers" across the country where purchased merchandise is packaged and shipped. The centers employ more than 125,000 full-time employees, according to Amazon.

Meanwhile in New York, where Amazon eyes $2.8 billion in tax breaks and grants from the city and the state for its new company headquarters in Queens, warehouse workers in Staten Island have announced plans to unionize, a concept that the company vehemently opposes.

Amazon plans to invest $2.5 billion for one of its double headquarters, pledging to hire 25,000 employees over the next 15 years. The company argues that it will contribute an additional $27 billion to the city's economy. The other East Coast headquarters is planned in Washington, D.C. suburb of Arlington in Virginia, where the company is also seeking $750 million incentives.

However, the move backed by New York Governor Andrew Cuomo and Mayor Bill de Blasio was not welcome by some politicians and activists, who claim that the new Amazon headquarters will further strain already inadequate public transportation services and hike real estate prices in a city that has already been suffering from the lack of affordable housing.

These views were also voiced by the opponents of the plan, bolstered by pro-union Amazon workers, at a council hearing on Wednesday. The deal, opposed by figures including NYC Comptroller Scott Stringer and City Councilman Jimmy Van Bramer of the district where the project is planned, is not subject to a vote or rejection by the city council. However, Amazon employees in New York want to use this public debate as an opportunity to break the company's anti-union policies, Bloomberg reported.

Accordingly, the workers demand better safety, pay and shift conditions from Amazon, citing them among the primary reasons for the unionization move.

The Retail, Wholesale and Department Store Union (RWDSU), a powerful trade union, is supporting the campaign of the warehouse employees, in addition to plans to unionize workers at Whole Foods grocery chain, which was acquired by Amazon in Aug. 2017. The union issued a report in November accusing Amazon of deadly work conditions and activities preventing workers from unionizing, which is denied by the company.

Long was among the pro-union employees that attended to the hearing on Wednesday. "The third and fourth floors are so hot that I sweat through my whole shift, even when it's freezing cold outside. We have asked the company to provide air conditioning for us, but they told us that the robots inside can't work in cold weather, so there's nothing they can do about it," he was quoted by Vice News as saying.

The company says that conditions subject to workers' complaint only occur during peak seasons and there many employees that benefit from extra shifts offered by the company in exchange for long work hours.

New York Economic Development Corporation (EDC) President James Pattchett was also grilled by NYC Council members. Pattchett said they were concerned by reports and claims about Amazon's worker practices but admitted that these issues were not discussed during negotiations for tax cuts and incentives.