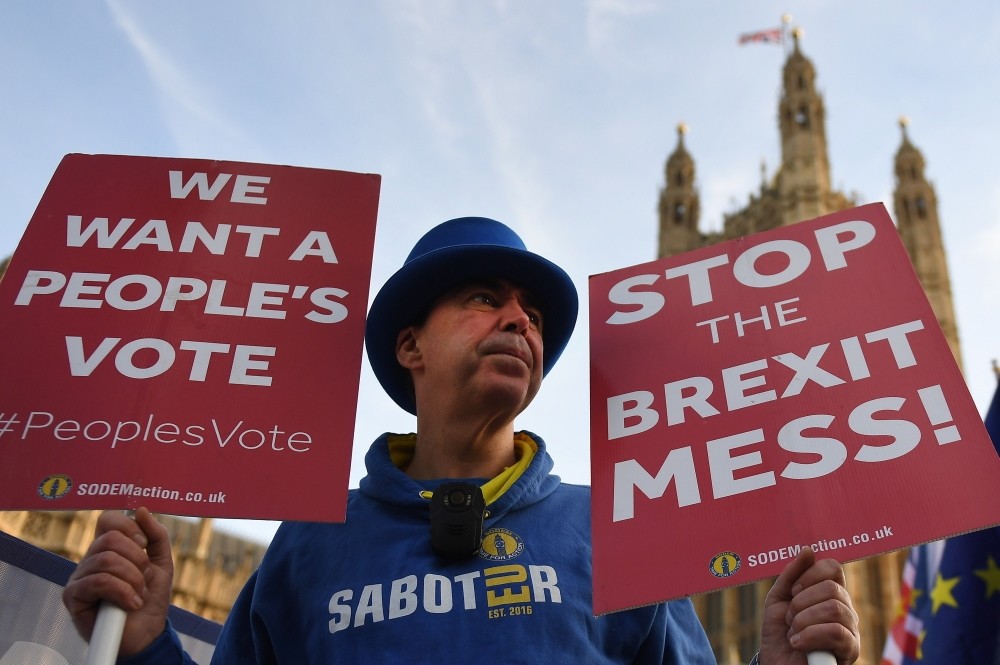 Pro-EU protesters demonstrate outside Parliament calling for a people's vote in London, yesterday.
by Dec 18, 2018 12:00 am

The drama of Brexit still looms over not only British Prime Minister May's government, but also the whole of Europe with three possible scenarios dominating conversations, each embodying a mountain of risks

The United Kingdom's exit from the European Union has been plunged into disarray by Prime Minister Theresa May's failure to find a divorce deal the British parliament will approve.

With Brexit in chaos, the United Kingdom faces three main choices: no-deal Brexit, a referendum or a last-minute deal.

If the lower house of the British parliament cannot agree on a deal then the world's fifth-largest economy will leave the EU without one on March 29 at 2300 GMT as the date is set in law - the 2018 Withdrawal Act.

To stop a no-deal Brexit, the 2018 Act would have to be changed or replaced, yet there is no consensus on what to replace May's deal with.

Ministers have the power to change the date with secondary legislation but given the significance of such a move, lawmakers would demand a say.

No deal means there would be no transition so the exit would be abrupt, the nightmare scenario for international businesses and the dream of hard Brexiteers who want a decisive split.

Britain is a member of the World Trade Organization so tariffs and other terms governing its trade with the EU would be set under WTO rules.

Business leaders are triggering contingency plans to cope with additional checks on the post-Brexit UK-EU border they fear will clog ports, silt up the arteries of trade and dislocate supply chains in Europe and beyond.

Bank of England Governor Mark Carney said leaving the EU with no transition could be akin to the 1970s oil shock.

Ivan Rogers, Britain's former representative to the EU, said the risk of a no deal had been seriously underestimated. A senior British minister told Reuters last week the risk of a "managed no deal" Brexit was rising.

Brexit supporters say there would be short-term disruption but in the long-term the UK would thrive if cut free from what they cast as a doomed experiment in German-dominated unity and excessive debt-funded welfare spending.

ANOTHER REFERENDUM OR ANOTHER ELECTION

Since the 2016 referendum, opponents of Brexit have sought another vote they hope will stop the exit.

May has repeatedly ruled out another vote, saying it would undermine faith in democracy. But as her options narrow, the idea of asking the public for their view has gained momentum.

A new referendum can only be called if it is approved by parliament and there is currently no majority in favor of one.

The opposition Labor Party wants to push for an election and only if that is rejected will it consider another referendum.

Opinion polls show both major parties have similar support so an election may be inconclusive. Many Conservative lawmakers do not want May to lead them into another election.

Even if parliament did agree to a second referendum, Britain would have to ask for an extension to its timetable for leaving the EU to allow enough time for a campaign, probably by withdrawing its Article 50 formal departure notification.

The Electoral Commission would have to agree what question, or questions, would be asked of the public.

"If you look at all of this mess how can it be undemocratic to say to the British people 'in light of all of this, do you want to proceed?'" former prime minister Tony Blair said.

Opponents of another referendum say it could bring disorder as it would be an affront to the 17.4 million voters who backed Brexit and it would not solve divisions.

Brexit supporters would then demand a third, decisive referendum to resolve the question that has haunted the United Kingdom since it lost its empire: Should it go it alone or partner with the European project?

May still hopes to get her deal through parliament, though even members of her own cabinet admit privately that to do so she will need to make significant changes and win over lots of opposition lawmakers.

Facing defeat, May postponed a parliamentary vote on the deal, pledging to seek "legal and political assurances" from the EU. Those efforts appear so far to be in vain. The EU said it will not reopen the negotiation though it signaled it might offer some concessions next month.

The Northern Irish DUP, which has propped up May's minority government, has demanded she ditch the Irish backstop, something the EU has ruled out.

May needs 318 votes to get a deal through parliament yet 117 of her 317 lawmakers voted against her in a confidence vote on Dec. 12. So she will need the support of some of the Labour Party's 257 lawmakers or to win over swathes of her own party and the DUP.

Labor is divided over Brexit and many of its lawmakers represent northern constituencies which voted overwhelmingly to leave the EU in 2016.

A parliamentary vote on her deal will happen before Jan. 21, May's spokeswoman said. If May was unable to get her deal through parliament, London could try to delay Brexit to negotiate a different deal.

Even if she gets her deal, or a variant of it, through, May would then have the job of turning the complex agreement into law, and all by March.

This involves line-by-line scrutiny in the lower house, where May is likely to have to defeat more amendments designed to alter or thwart her exit plan. Each vote could come down to the choices of a handful of lawmakers.