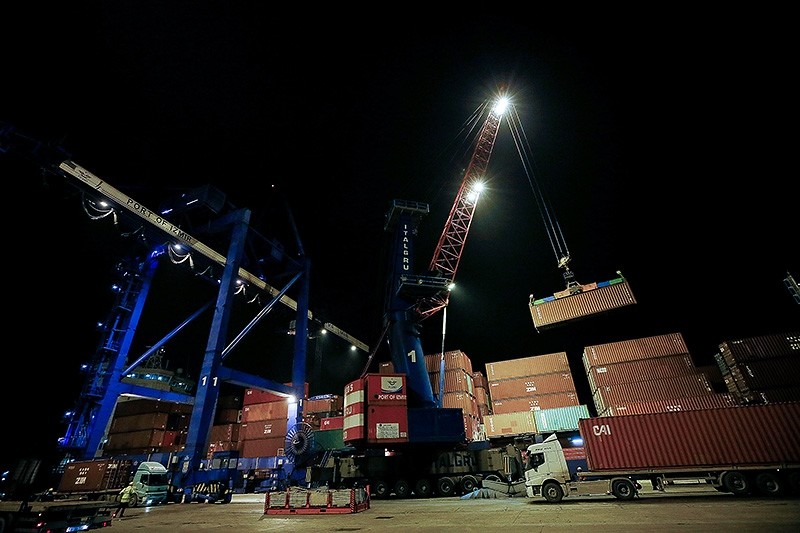 This file photo dated Dec. 31, 2018, shows container being loaded onto a ship on New Year's Eve in western Turkey's the Port of Izmir, which remained open late in the night due to increased demand from exporters. (AA Photo)
by Daily Sabah Jan 04, 2019 12:00 am

Exports hit an all-time high with $168.1 billion in 2018, a 7.1 percent increase compared to the previous year. The largest contribution to exports came from the automotive, textile and steel industries

The export-import coverage ratio increased by 8.2 percentage points compared to 2017 and rose to 75.3 percent. The overall foreign trade volume slightly rose by 0.1 percent to $391.2 billion.

Pekcan said that the share of exports in the GDP is expected to increase in 2019.

"We have set special market entry strategies in four countries, namely China, India, Mexico and Russia, which make up 78 percent of our foreign trade deficit," she added.

"Last year, Turkish exporters reached 242 markets around the world," the trade minister said and added, "Turkey maintains its strength in export markets, as the whole world struggles with the uncertainties of global trade wars." 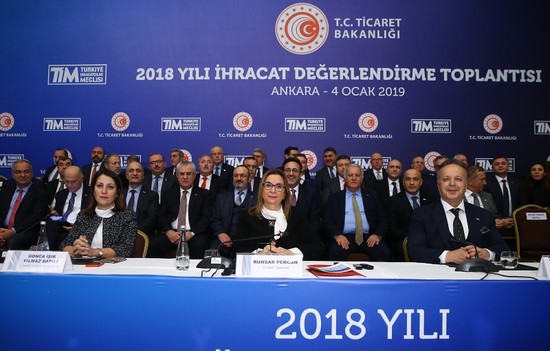 Pekcan remarked that exports to Africa, which was identified as a target market, surged 24 percent, while exports to Latin America jumped 35.6 percent in 2018.

"Our long term goal is to restore a balanced structure in Turkey's foreign trade relations and thus gradually decrease our country's external finance need," she added.

In her speech, Pekcan also said that the U.S. Federal Reserve's tight monetary policy, which is expected to continue in 2019, had a slowing effect on growth, especially in developing economies. She noted that the European Central Bank is expected to introduce a tighter monetary policy in 2019 compared to the previous year and cited the U.S.' trade wars with China and the EU, recession in European economies and Brexit among the developments that are negatively affecting risk expectations, manufacturing and trade across the globe.

Saying that the World Trade Organization (WTO) expects a modest 3.7 growth on a global scale in 2019, Pekcan added that the contribution of exports in Turkey's growth has become more strategic than ever and the Trade Ministry will continue to take measures to support exporters.

Recent foreign trade deficit figures mark a significant improvement compared to the figures for 2017: $76.8 billion. The year-end foreign trade deficit expectation put forward in the New Economic Program (NEP), which was announced by the Treasury and Finance Minister Berat Albayrak on Sept. 20, was $66 billion.

Both export and import figures were also lower than the $170 billion export and $236 billion import goals set in the NEP.

In December, the foreign trade deficit decreased by 71.06 percent compared to the same month last year to $2.68 billion despite a monthly increase in oil and natural imports due to winter. Exports in December were $16.58 billion, a 28.2 decrease, while imports were $13.9 billion, a 0.41 percent increase.

Mineral fuels, oils and distilled products topped imports in December at $3.95 billion, while their annual cost to the Turkish economy was $43 billion with a share of some 20 percent of all imports.

In December, Germany was Turkey's main export destination with $1.22 billion, followed by the U.K. with $895 million and Italy with $740 million.

Russia topped the sources of imports with $1.81 billion, followed by Germany with $1.72 billion and China with $1.29 billion.

On an annual basis, Germany was the top destination for Turkish products with $15.8 billion, and it was followed by the U.K. whose imports from Turkey totaled $11.4 billion in 2018. While Italy ranked third among Turkey's export destinations with $9.5 billion, the U.S. came fourth with $8.2 billion.

The highest export increase on a sectoral basis was observed in steel sales abroad with 36.1 percent. The exports of yachts and ships fell by 26 percent, the highest decrease among sectors.

The manufacturing industry accounted for 84 percent of total exports and reached $136.3 billion, a 12.4 percent rise compared to the previous year.

Automotive products were the leading category in December with $2.16 worth of exports. Overall, automotive was the leading sector in exports in 2018 with $31.5 billion.

The automotive industry was followed by the textile and apparel sector, which posted $17.6 billion in exports. The steel industry ranked third and exports reached $15.5 billion in 2018.