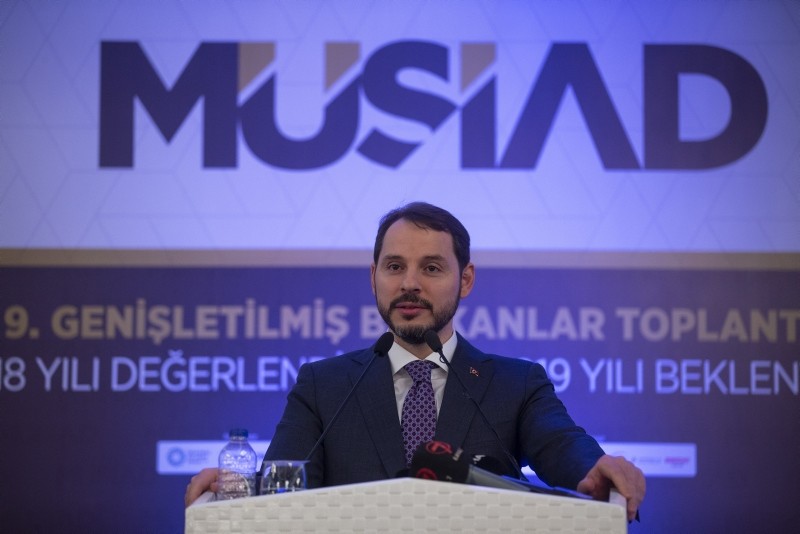 Implementing a hard-line fiscal discipline to thwart the negative impacts of market storms at home and abroad in 2018, the Turkish government has reiterated its commitment to tight policies this year while sustaining a healthy financial environment for real economy actors

In the aftermath of a series of stormy events, which had shaken the global and local markets in 2018, the Turkish government made serious efforts to ensure solid economic rebalancing. Efforts were further accelerated with the announcement of the New Economic Program (NEP) in late September.

Tight fiscal and monetary policy dominated the government's economic policies in 2018 to counterbalance the turbulent year.

Treasury and Finance Minister Berat Albayrak emphasized that fiscal discipline has so far been one of the most important anchors of their economic achievements and will continue to remain so.

"The Turkish economy is gearing up day by day. In August, we experienced significant fluctuations in our markets. We've come a long way. We have reached normalization with the sound infrastructure of our economy," Treasury and Finance Minister Albayrak said at the Independent Industrialists' and Businessmen's Association's (MÜSİAD) meeting in the capital Ankara Wednesday.

"Turkey will in no way compromise on goals set out in the NEP. We will continue to maintain our firm stance on budget discipline," he stressed.

The minister further noted that Turkey aims to ensure a healthy, balanced and sustainable economic growth. "We gained significant momentum in the rebalancing process, we reached a normalization process in financial markets thanks to our timely measures," Albayrak said.

One of the most important factors in reducing the fragility of the economy is to reduce the current account deficit to national income ratio, according to Albayrak, who stressed that they are determined to overcome this problem in a very serious way with macroeconomic policies in the short term and with structural reforms in the medium and long term.

"We are especially aware of how important it is to reduce our dependence on imports… In this context, we have pledged to primarily maintain tight fiscal policy and effective use of public resources and initiated a significant saving program," he added.

Turkey's current account balance reported a higher than expected surplus of $2.77 billion dollars in October last year, improving from previous year's deficit of $3.83 billion, according to the Central Bank of the Republic of Turkey's (CBRT) balance of payments report.

Further in his speech, Minister Albayrak remarked that the Turkish lira gained 20 percent against foreign currencies since August last year and positively decomposed especially when compared to many developing countries.

"In this period, the country's [Credit Default Swap] premiums showed a decline of 230 and 10-year government bond interest fell by about 480 basis points, showing a very positive development," Albayrak noted.

Within the scope of the budget, the minister said they had foreseen the profit to be transferred from the CBRT to the Treasury to be TL 20 billion ($3.63 billion), however, he noted that this figure will be above their expectations at TL 37 billion.

"It is a figure well above the target we set in the budget and well above our expectations. A major part of this resource will be launched in January," he added.

The main purpose of transferring the said profit to the Treasury in January instead of April, according to Albayrak, is to provide liquidity to the market much faster by accelerating public investment, public payments, market payments and value-added tax (VAT) returns in the scope of effective cash management.

Further in his speech, Albayrak said they will be announcing Thursday a very important loan package for small and medium-sized enterprises (SMEs) with the participation of 12 banks.

"This is also very important in terms of our real economy. With this liquidity that will occur in both the public and the financial markets, we will all together enable the market to recover gradually in a much more active way and bring it to a better position," Albayrak said, speaking of the liquidity contraction caused by the uncertainty in the market especially in the last quarter.

According to a report by the Organization for Economic Co-operation and Development (OECD), small and medium-sized businesses play an important role in improving efficiency and diminishing inequalities, constituting more than 95 percent of all companies and providing 60-70 percent of employment in OECD member countries.