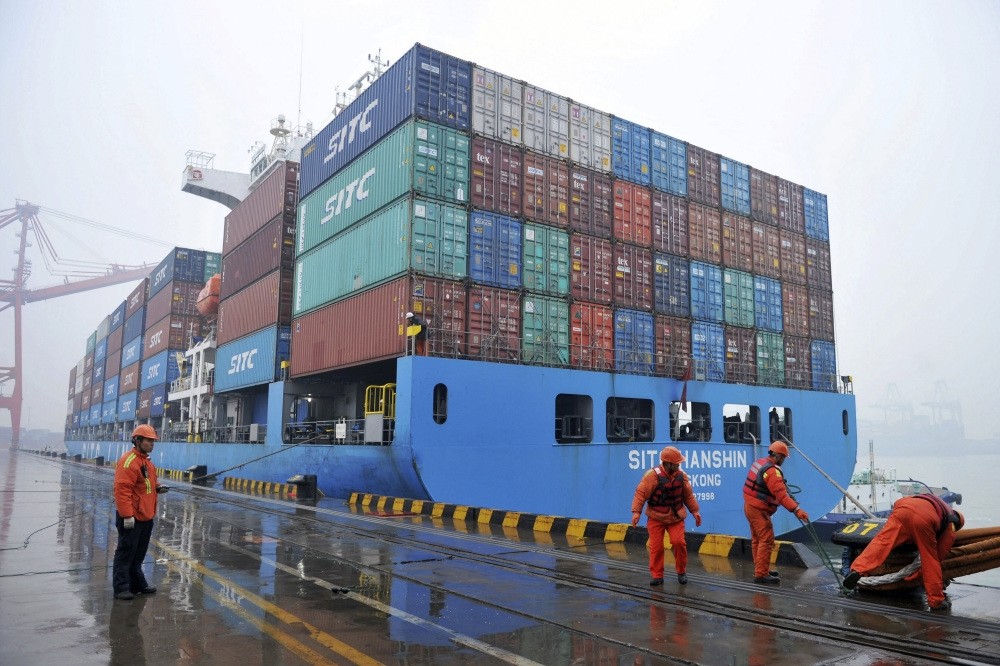 The unexpected 4.4 percent decrease in China's exports came as a shock to the global markets and added to worries of weaker corporate profits and investment, sending stocks lower

China's exports unexpectedly fell the most in two years in December, while imports also contracted, pointing to further weakness in the world's second-largest economy in 2019 and deteriorating global demand.

Adding to policymakers' worries, yesterday's data also showed China posted its biggest trade surplus with the United States on record in 2018, which could prompt President Donald Trump to turn up the heat on Beijing in their bitter trade dispute.

Softening demand in China is being felt around the world, with slowing sales of goods from iPhones to automobiles, prompting warnings from the likes of Apple and from Jaguar Land Rover, which last week announced sweeping job cuts.

The dismal December trade readings suggest China's economy may have cooled faster than expected late in the year, despite a slew of growth-boosting measures in recent months ranging from higher infrastructure spending to tax cuts.

Some analysts had already speculated that Beijing may have to speed up and intensify its policy easing and stimulus measures this year after factory activity shrank in December.

China's December exports unexpectedly fell 4.4 percent from a year earlier, with demand in most of its major markets weakening. Imports also saw a shock drop, falling 7.6 percent in their biggest decline since July 2016.

Analysts had expected export growth to slow to 3 percent with imports up 5 percent.

"Today's data reflect an end to export front-loading and the start of payback effects, while the global slowdown could also weigh on China's exports," Nomura economists wrote in a note, referring to a surge in shipments to the U.S. over much of last year as companies rushed to beat further tariffs.

"The export growth print also suggests that the recent strength of the yuan might be short-lived; Beijing will perhaps be more eager to strike a trade deal with the U.S.; and that policymakers will need to take more aggressive measures to stabilize GDP growth." Net exports had already been a drag on China's economic growth in the first three quarters of last year, after giving it a boost in 2017.

Asian shares and U.S. stock market futures fell as the surprisingly weak Chinese data added to fears of weaker corporate profits and investment, while the yuan currency gave up some of its early gains.

China's politically-sensitive surplus with the U.S. widened by 17.2 percent to $323.32 billion last year, the highest on record going back to 2006, according to Reuters calculations based on customs data.

China's large trade surplus with the United States has long been a sore point with Washington, which has demanded Beijing take steps to sharply reduce it.

Washington imposed import tariffs on hundreds of billions of dollars of Chinese goods last year and has threatened further action if Beijing does not change its practices on issues ranging from industrial subsidies to intellectual property. China has retaliated with tariffs of its own.

However, Beijing's export data had been surprisingly resilient to tariffs for much of 2018, possibly because companies ramped up shipments before broader and stiffer U.S. duties went into effect.

As many market watchers predicted, that boost has faded in the last few months. China exports to the U.S. declined 3.5 percent in December while its imports from the U.S. were down 35.8 percent for the month.

But December's gloomy data, along with several months of falling factory orders, suggest a further weakening in its exports in the near term.

"A trade recession is likely, in our view," Raymond Yeung, chief economist at ANZ, said in a note, predicting a period of export contraction similar to 2015-16.

"The global electronics cycle remains the key driver of Chinese exports. A potential downturn in the sector poses the real risk to China's external outlook even if China and the U.S. reach a resolution on their trade dispute."

ING said a fall in electronic shipments could be related to foreign companies avoiding using China-made electronic components, adding that exports and imports of electronic parts and goods will likely shrink this year.

The higher tariffs China levied on U.S. supplies also hit overall import growth. For all of 2018, soybeans, the second largest imports from the U.S., fell for the first time since 2011.

Even if Washington and Beijing reach a trade deal in their current round of talks, it would be no panacea for China's slowing economy, analysts say.

"The import slowdown is consistent with other signs that growth in China's domestic economy continued to weaken," said Louis Kuijs, head of Asia economics at Oxford Economics.

Chinese policymakers are widely expected to roll out more support measures in coming months if domestic and external conditions continue to deteriorate.

Early this month, the central bank said it would slash banks' reserve requirements -- the fifth such cut in a year -- as it tries to encourage more lending and reduce the risk of a sharp slowdown.

"If pressure on the economy is still relatively large in the first half, a cut every quarter should be highly likely," said Xu Gao, chief economist at Everbright Securities.

In an annual meeting of top leaders last month, China said it will boost support for the economy in 2019 by cutting taxes and stepping up policy adjustments.

A few analysts believe interest rate cuts are a possibility, but most expect Beijing will refrain from massive stimulus measures like those deployed in the past, due to worries that it could add to a mountain of debt and weaken the yuan.

Sources told Reuters last week that Beijing is planning to lower its economic growth target to 6-6.5 percent this year after an expected 6.6 percent in 2018, the slowest pace in 28 years.