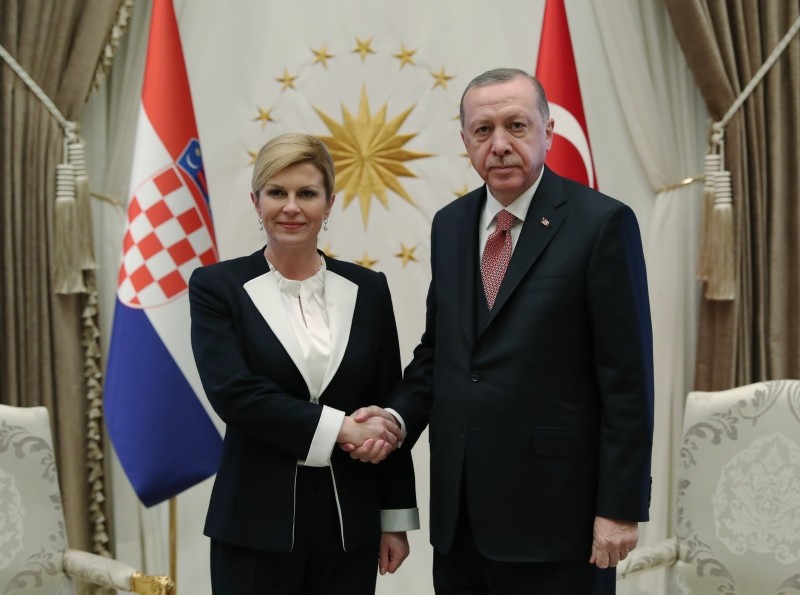 Turkey and Croatia are eager to further improve their economic ties and reach a bilateral trade volume of $1 billion as soon as possible, the presidents of the two countries said Wednesday

With a view to enjoying the benefit of rising trade volume and increasing investments, Turkey and Croatia reiterated their joint dedication to encouraging more commercial exchange and bilateral investments during Croatian President Kolinda Grabar-Kitarović's visit to Ankara Wednesday.

"During our meetings today, we have discussed all the measures to boost our bilateral trade volume and investments in detail," President Recep Tayyip Erdoğan said during a joint press conference with Croatian counterpart Kitarović.

In order to reach the goal of increased trade volume, the two sides will launch a joint economic commission (JEC) mechanism and will convene together with the broad participation of Turkish and Croatian businesspeople.

The trade volume between Turkey and Croatia stood at around $387.41 million in 2015, $411.44 million in 2016 and in 2017 rose to $530.74 million, out of which Turkey's exports amounted to around $313.88 million and imports stood at $216.87 million, according to Turkish Statistical Institute (TurkStat) data. The TurkStat data also revealed that Turkey's exports to the country totaled $376.8 million in the period from January to November and its imports were recorded at $170.6 million.

By expanding commercial relations, cultural exchanges will also increase, President Erdoğan said, announcing that a cooperation agreement on culture and art was signed. He noted that another memorandum of understanding was signed for the construction of an Islamic cultural center in the country. "These agreements will contribute to reinforcing the cultural and humanitarian bonds between the two countries," he said.

President Erdoğan also stressed that the Turkish and Croatian delegations discussed major regional and international issues that are of great concern to both countries and highlighted that the two countries share the same view on most vital global issues. The president also said that the tripartite commission consisting of Turkey, Bosnia-Herzegovina and Croatia will be relaunched.

The Turkey-Bosnia Herzegovina-Croatia trilateral advisory mechanism was established in January of 2010.

The foreign ministers of the three countries, within the context of the trilateral advisory mechanism, gathered in New York in September 2017.

"Croatia has on a number of occasions reiterated its support to Turkey on its European Union journey, given that Turkey is one of Europe's main security and economic partners," the president said, expressing his hope that Croatia's support will be stronger once the country assumes the EU Presidency in 2020.

Erdoğan also cited the Brexit issue that has held sway over European politics in the last two years. He underscored that the Turkish government is working on mechanisms to preserve bilateral trade volume and economic relations with the U.K. in the post-Brexit period.

For her part, Kitarović said the two countries have potential and can do much more in the area of trade. "We want to reach $1 billion in trade volume as soon as possible," Kitarovic noted. She added that they discussed developments in energy and transportation as well. "Croatia will continue supporting Turkey on its EU path," she noted.

"Relations between Turkey and Croatia are at the perfect level," Kitarovic emphasized.

The free trade agreement (FTA) between the two countries was inked in March 2002, entered into force in July 2003, and was terminated when Croatia joined the EU in July 2013, according to the Foreign Affairs Ministry.

Bilateral trade and economic ties between the two countries are said to have lagged very much behind their friendship. During his visit to the Croatian capital Zagreb in April 2016, President Erdoğan called on Croatian authorities to help boost bilateral trade to $1 billion within five years, indicating that they need to boost the economic and commercial relationships to the level of their political relations.

In the meantime, motor vehicles, machinery and equipment, textile products, and iron and steel are among the most exported goods from Turkey to Croatia in recent years, while Turkey mostly imported technical equipment, fertilizer, metal extracts, raw materials and plastic.

Turkish investments toward Croatia have recently gained momentum. In 2012, Turkish businessmen ranked in the top three among foreign investors investing in the country.

Within Turkish investments in Croatia, tourism, hotel and marina management ranks No. 1. Up until today, six projects valued over $610 million were undertaken by Turkish construction firms in Croatia. Fifteen Turkish firms have investments worth 350 million euros ($399.2 million) in the country.

A total of 483,137 Croatian tourists visited Turkey in 2017, according to statistics from the Culture and Tourism Ministry.