Minister Albayrak in Davos: 2019 to be promising for Turkey 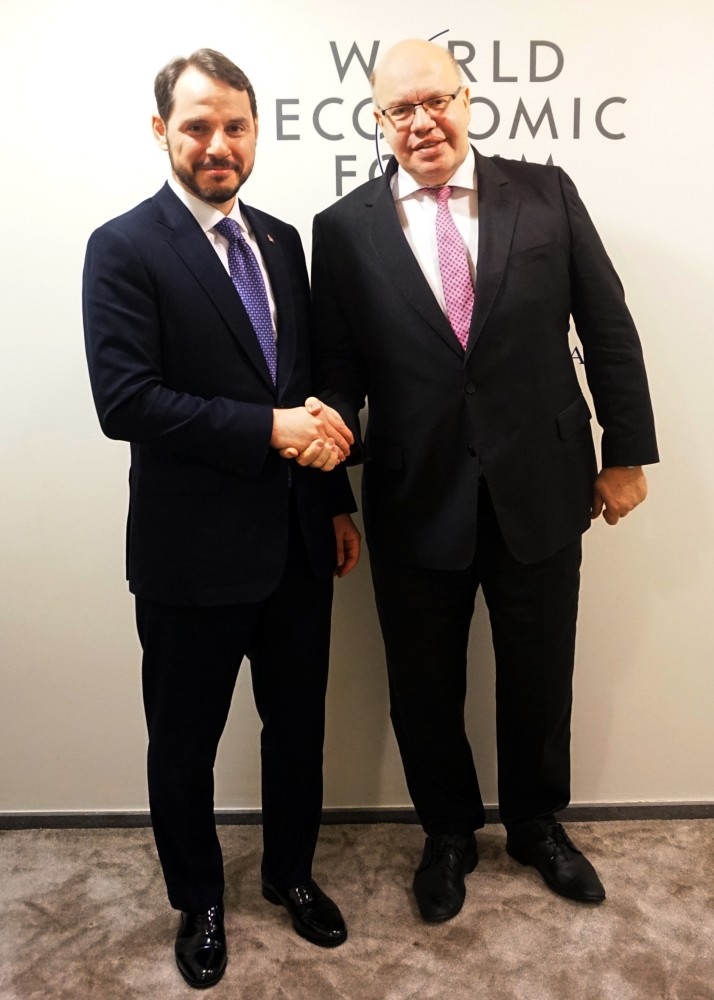 After enjoying strong growth in 2017 and the first three quarters of last year, Turkey expects a rebalancing period in the economy extending into the first half of this year.

Preparing for a slowdown in economic activity, the government has taken the necessary measures to ensure effective management for rebalancing.

In accordance with the government's plan, the Turkish economy will shift to "quality-based" growth in the upcoming period, Treasury and Finance Minister Berat Albayrak said Thursday at the World Economic Forum (WEF). During an interview with Bloomberg Television, Albayrak stressed that the economy will bounce back to meet the official growth target of 2.3 percent by the end of this year, which will be a very promising year for Turkey.

Under Treasury and Finance Minister Albayrak's watch, the Turkish Treasury has moved to limit lira bond supply to restrain yields after a market slump last summer. It has not sold a benchmark 10-year bond denominated in liras since July.

Albayrak said the Treasury will be "very active and aggressive" in managing its borrowing strategy in compliance with his earlier pledges to adopt a different auction methodology.

"Our treasury management aims to decrease borrowing costs and correct the use of liquidity," he said. The Treasury saved nearly TL 3 billion in interest rate expenditures in the last quarter of 2018.

The Treasury has announced plans to borrow in Chinese yuan with panda bonds and samurai bonds denominated in Japanese yen.

To mitigate concerns, Albayrak and his team prepared the New Economic Program (NEP), which was unveiled in September. This three-year economic plan has outlined major macroeconomic targets, including the budget deficit, the current account deficit, inflation and growth.

The minister highlighted that the treasury has achieved its target of a 1.9 percent budget deficit. He noted that when he assumed the post six months ago, the Finance Ministry had to manage the remaining budget, which was only 30 percent of what was initially set.

The NEP sees the government budget deficit at 1.8 percent of gross domestic product at the end of 2019.

"The central bank has been doing its job very well in the last couple of months, and they have proved how independent and how strong they are," Albayrak said. "Monetary and fiscal policy alignment is the best in decades. You can only fight inflation with fiscal and monetary policies."

After the lira hit historic lows against the U.S. dollar in August, inflation hit over 25 percent in October, which compelled the central bank to raise interest rates. Lastly, the bank kept benchmark interest rates unchanged at 24 percent on Jan. 16 last week.

The treasury and finance minister also evaluated his Davos program during a press meeting with representatives from Turkish media.

When asked about investors' reaction to Turkey, Albayrak stressed that investors he met in Davos appreciated Turkey's current economic outlook that ensured effective and coordinated measures when compared to the situation six months ago, a period of turbulence in the country's economy. The minister also stressed that Turkey welcomes foreign investment in his exchanges with CEOs from around the world.

During his meetings, the minister also underscored the strength of the Turkish economy despite coup attempts, terror attacks and regional tensions, which severely impacted the country's outlook.

As part of his Davos program, Albayrak met with French Finance Minister Bruno Le Maire and German Economy and Energy Minister Peter Altmaier on the sidelines of the World Economic Forum yesterday.

During the meetings, Albayrak exchanged views related to further improvement of bilateral economic relations between Turkey and the two countries.

The minister also said French Finance Minister Le Maire will visit Turkey in May, and he will visit Germany to meet Altmaier and the German economy administration in the spring.

He also stressed that positive returns from Davos meetings are already visible, especially on the markets.