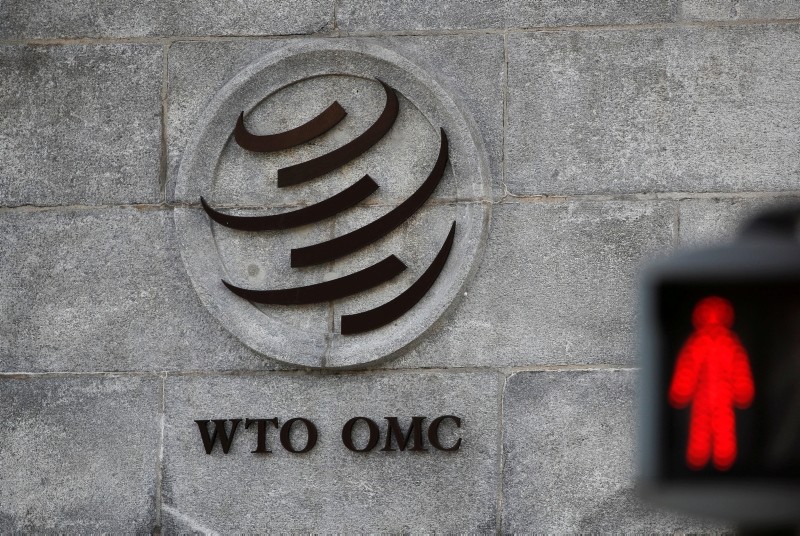 A logo is pictured outside the World Trade Organization (WTO) headquarters next to a red traffic light in Geneva, Switzerland, October 2, 2018. (Reuters Photo)
by Jan 25, 2019 1:20 pm
Impatient with the lack of World Trade Organization rules to cover the explosive growth of e-commerce, 76 countries and regions agreed on Friday to start negotiating this year on a set of open and predictable regulations.

The WTO's 164 members were unable to consolidate some 25 separate e-commerce proposals at the body's biennial conference at Buenos Aires in December, including a call to set up a central e-commerce negotiating forum.

In a gathering on the sidelines of the World Economic Forum in Davos, ministers from a smaller group of countries including the United States, the European Union and Japan, agreed to work out an agenda for negotiations they hope to kick off this year on setting new e-commerce rules.

"The current WTO rules don't match the needs of the 21st century. You can tell that from the fact there are no solid rules on e-commerce," Japan's trade minister Hiroshige Seko told reporters in Davos.

The WTO failed to reach any new agreements at a ministerial conference in December, which ended in discord in the face of stinging U.S. criticism of the group. The stalemate dashed hopes for new deals on regulating the widening presence of e-commerce.

The emergence of the coalition willing to press ahead with new e-commerce rules, despite others' reservations, reinforces a trend toward the fragmentation of WTO negotiations and away from global "rounds" of talks that have run out of steam.

"We will seek to achieve a high-standard outcome that builds on existing WTO agreements and frameworks with the participation of as many WTO members as possible," members of the coalition said in a joint statement issued on Friday.

"We continue to encourage all WTO members to participate in order to further enhance the benefits of electronic commerce for businesses, consumers and the global economy."

E-commerce, which developed largely after the WTO's creation in 1995, was not part of the Doha round of talks that began in 2001 and eventually collapsed more than a decade later.

Many countries insist that Doha-round development issues must be dealt with before new issues can be tackled. But other countries say the WTO needs to move with the times, and note that 70 regional trade agreements already include provisions or chapters on e-commerce, according to a recent study.

U.S. President Donald Trump's administration says the WTO is dysfunctional because it has failed to hold China to account for not opening up its economy as envisaged when Beijing joined in 2001.

To force reform at the WTO, Trump's team has refused to allow new appointments to the Appellate Body, the world's top trade court, a process which requires consensus among member states. As a result, the court is running out of judges, and will be unable to issue binding rulings in disputes.