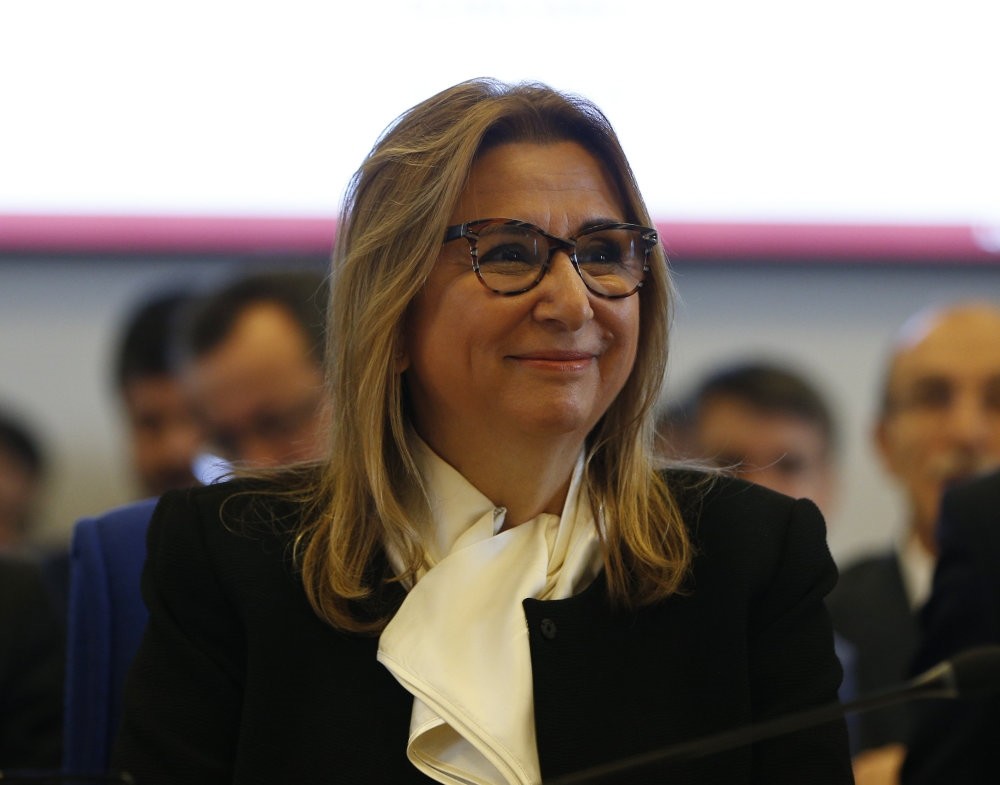 Trade Minister Ruhsar Pekcan held meetings with her Dutch and Japanese counterparts as well as international investors during the 49th World Economic Forum (WEF) in Davos, Switzerland.
by Daily Sabah Jan 26, 2019 12:09 am

Despite recent protectionist inclinations in global trade, which may be dubbed the contemporary version of mercantilism, Turkey continues to maintain its stance on free trade regulated by globally acknowledged rules

In an atmosphere of rising inclinations toward protectionism in global trade and a 21st-century resurrection of mercantilism, Turkey is one of the most vocal proponents of free trade based on rules acknowledged worldwide. Trade Minister Ruhsar Pekcan once more reiterated Turkey's stance on the protection of free trade at the 49th World Economic Forum (WEF) in Davos, Switzerland. Pekcan stressed that protectionist measures create a bipolar world order and drew attention to the necessity to update the rules set by the World Trade Organization (WTO).

One of the most debated topics of the WEF has been protectionist trade, Pekcan said and underscored that Turkey always welcomes cooperation and conveyed the country's message for global collaboration in trade with relevant parties during Davos meetings.

"Turkey has a determined stance when it comes to global trade. We strongly support inclusive, rule-based, free, fair and sustainable trade. We are ready to actively participate in the negotiations for the modernization of the WTO rules," she said in an interview with Anadolu Agency (AA) in Davos. She added that Turkey will continue to back up multilateral negotiation-based decisions, not unilateral ones.

She noted that hundreds of billions in trade were lost due to trade wars last year.

The trade minister also cited her meetings with international investors at the WEF. "We have called on investors from around the world to invest in Turkey. Our ministry has a project for specialized free trade zones where we are striving to bring together foreign investors, angel investors, university students and entrepreneurs," she said.

Pekcan emphasized that meetings with foreign investors were positive and noted that the continuity of contacts with international businesspeople will be maintained in the upcoming period. The minister also expressed her expectations for increasing investments in 2019.

She also stressed the importance of a more inclusive e-commerce sector that has a great potential to trigger global trade but warned of data protection. She highlighted the necessity to outline a globally acknowledged re

Meanwhile, over 70 WTO members declared their intention to start negotiations on e-commerce during Davos meetings.

Holding separate meetings with the Dutch Minister for Foreign Trade and Development Cooperation, Sigrid Kaag, and Japanese Minister of Economy, Trade and Industry Hiroshige Seko, Pekcan was also present at the WEF's Global Future Council on International Trade and Investment.

Pekcan said updating the customs union agreement with the EU favors Europe as well, stressing failing to do so harms both sides. Noting that the U.K. is one of Turkey's crucial partners in Europe, Pekcan said they consider a comprehensive free trade agreement in this regard.

s a result of the talks I held, we think the updating of the customs union agreement will be realized after Brexit since everybody is fixated in that direction," she added.

Pekcan further added that the ministry has established a platform to manufacture and export high-tech products. "We established a technology platform and a working group consisting of business world and role models. Now we would like to build technology greenhouses in the free zones," she continued, suggesting that they wish to bring together investors, entrepreneurs and firms that will produce and export high-tech products and attract foreign investors.

"Our goal is to export products with high added value. I do not think we will be able to achieve a high-income segment in any other way," Pekcan noted, recalling the rate of high value-added product exports stood at 3.4 percent last year.