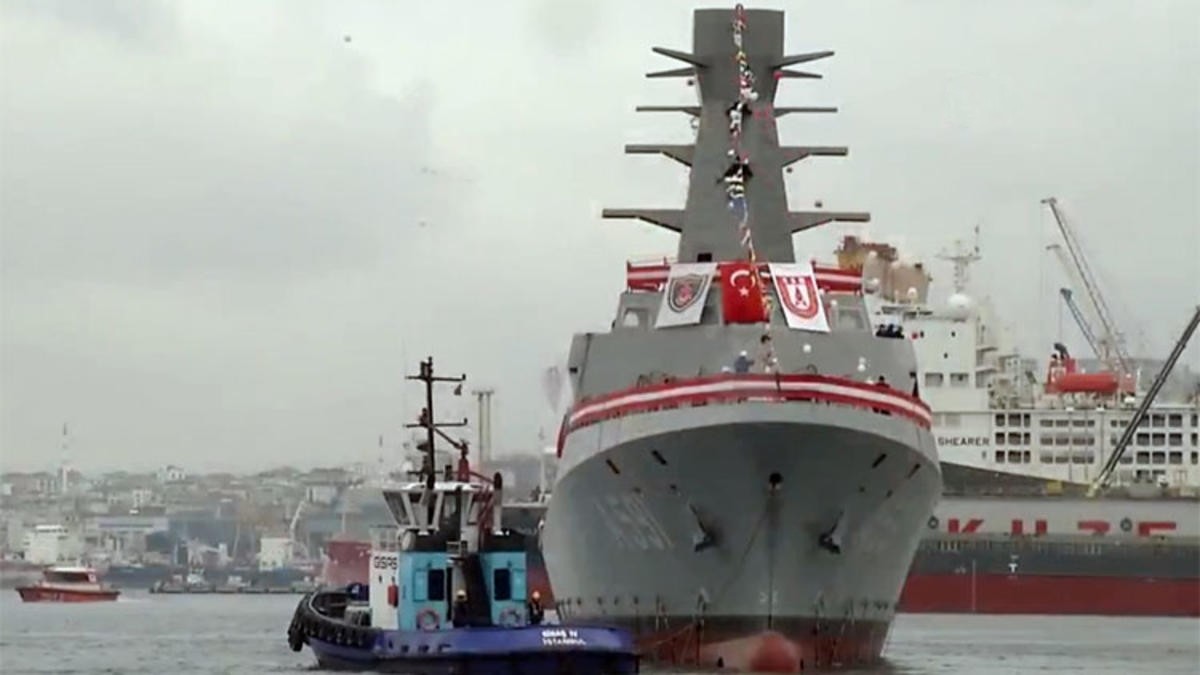 Turkeyu2019s latest corvette Ufuk, built as part of the national ship building program Mu0130LGEM, was launched Saturday with an official ceremony. The ship will carry out preventive intelligence operations in the seas surrounding Turkey.
by Daily Sabah Feb 11, 2019 12:15 am

Facilitated by government incentives and the strength of private sector companies, the shipping industry has made profound progress in the last 16 years, responding to domestic needs and demands from abroad

Turkey is one of the prominent Mediterranean countries that build, renovate and maintain ships, President Recep Tayyip Erdoğan said on Saturday during the launch ceremony for a new test and training ship, Ufuk (A-591). "The courage of our entrepreneurs, the labor of workers and government incentives have revived the shipping industry to a great extent in the last 16 years," the president said. While meeting domestic demands, the shipping industry also exports to Norway, the U.K., the Netherlands, France, Germany and Italy, Erdoğan noted.

Businesses just in the Tuzla shipyard have renovated, repaired and maintained around 2,000 ships in the last 16 years.

In January alone, the shipping and yacht sector's exports recorded a 116.2 percent surge, while the value of 12-month exports exceeded $1 billion.

Speaking of the importance of signal intelligence that will be provided by Ufuk, President Erdoğan said, "In today's world, where preventative intelligence, especially signals intelligence, has gained vital importance, I believe the corvette Ufuk will fill a large gap."

Erdoğan said the Ufuk is the first intel vessel produced using national resources and abilities – technology that few countries in the world possess. The Ufuk corvette, he added, is born out of developments in the region.

"Meeting this necessity with our domestic resources has become more urgent with imminent threats from Syria, developments in the Eastern Mediterranean, the Aegean Sea and the Black Sea," he emphasized.

Turkey's leading defense firm ASELSAN will provide the command and control, electronic systems as well as test and training equipment for the Ufuk corvette.

"The Ufuk corvette will be able to immediately detect threats to our national security, including international waters, for 45 days without pause and in harsh climates and maritime conditions," he said.

President Erdoğan also drew attention to the importance of a strong public and private partnership to strengthen the defense industry.

"When we look at countries with developed military technology, we observe the important role of private companies," he said. Helicopters, missiles, radar systems, radio systems and satellite technology Turkey uses in the military are provided by private sector companies, Erdoğan noted.

The Turkish defense industry offered new domestic products to security forces last year. Increasing their capabilities day by day under the coordination of the Defense Industry Presidency, domestic producers continue to reveal new products and capabilities. Products that pass through challenging testing processes take their place in the inventory in line with the needs of security forces.

KIRPI-2 vehicles were supplied for the safe and fast transport of personnel, weapons, ammunition and supply materials, providing effective and continuous combat service support to maneuver elements, fight against terrorism with a high level of explosive threat of mine/handmade explosive, as well as a classic military operation, supporting peace and transport of personnel in border missions. Another vehicle that entered the inventory for the first time was the Protected Ambulance KIRPI. This vehicle contributes to health service support activities to be carried out in the fight against terrorism with the classic military action of the troops, as well as the mine/hand-made explosive threat, peace-support and border missions.

Anka-S deliveries started in line with the needs of the Air Force Command. The Anka-S, which can be controlled via national satellites, has a range of thousands of kilometers. In line with the delivery program, 10 units of Anka-S entered the inventory.

LGK-84, Teber-82 and KGK-82 guidance kits, on the other hand, have significantly increased the effectiveness of security forces in the field.

The Laser Guidance Kit (LGK) transforms classical bombs fired under the wing into smart ammunition that hits the bulls-eye. The Winged Guidance Kit converts 250 and 500 kilograms of general-purpose bombs in the inventory of the Air Forces Command into air-to-surface long-range smart ammunition.

To meet the needs of the Turkish Land Forces Command, five modular base areas, equipped with high-tech products that were used in the most challenging geographical conditions, were delivered. 485 units of Ulak 4.5G base station were delivered.

Four prototype pods were delivered as part of the new generation Multi-Sensor Targeting Pod (ASELPOD) Project designed for fighter jets. The number of T129 Advanced Attack and Reconnaissance Helicopter ATAK exceeded 40 with new deliveries, while the number of UAVs in use approached 90.

More than 20,000 MPT-76 rifles, manufactured by the Mechanical and Chemical Industries Corporation (MKE) in private sector partnership, were delivered.