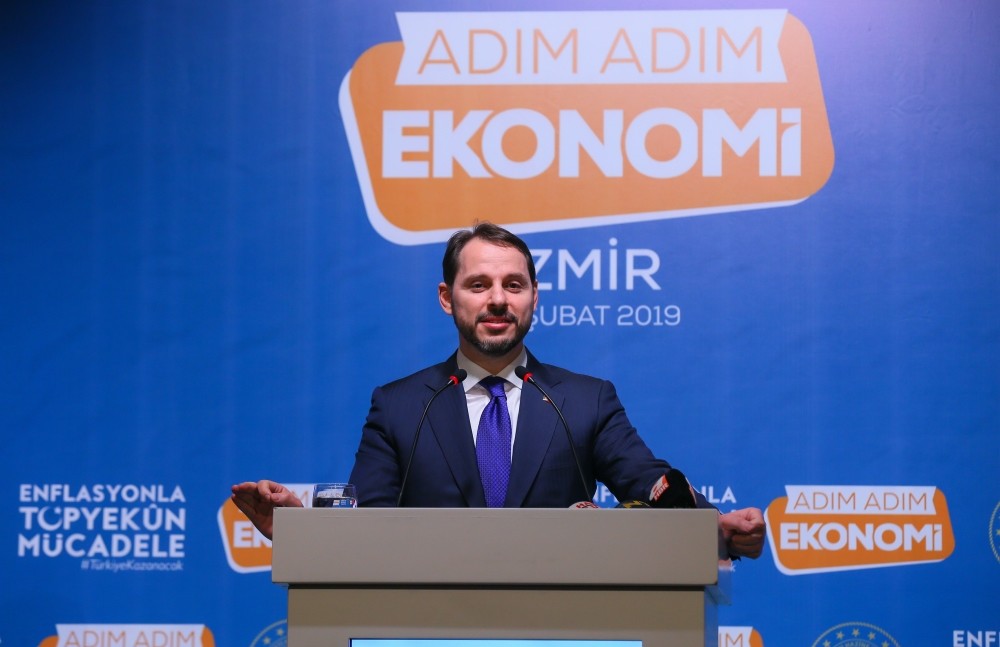 Turkey will be proceeding with an economic strategy based on balance and quality that does not allow for vulnerabilities, said Treasury and Finance Minister Berat Albayrak on Friday.

"The recovery in the economy continues rapidly," Albayrak said in his address at an event in Turkey's western İzmir province. He noted that in the second quarter, relief will be felt strongly in many areas.

"Turkey continues to strengthen its economic infrastructure… 2019 will be a year of structural transformations," he said.

Treasury and Finance Minister Albayrak emphasized that measures taken so far have enabled the country to start preliminary work on stronger financial structures and ramped up immunity against political and financial shocks.

Turkey has been through a difficult period over the last six months and has put forth a determined and strong stance since the speculative fluctuations in August, he noted.

During the market turmoil in August and September 2018, the Turkish lira lost almost half of its value. "We have seen this period as an opportunity for rebalancing. We have experienced about 30 percent improvement in exchange rates… the Turkish lira has become one of the top currencies positively decoupling compared to other emerging markets," Albayark said.

Turkey's current account deficit fell 8.8 percent year-on-year to reach $27.6 billion, falling to a 10-year low, according to data released by the Central Bank of Republic of Turkey (CBRT) on Thursday.

The minister also elaborated on falling interest rates, saying they will continue decreasing in the upcoming period and stressed that liquidity will further ease in the next few months.

The five-year government bond yields maintained a downward trend at 15.40 percent on Thursday, while the two-year bond had an 18 percent yield, which fell by 63 basis points in January. The Treasury previously announced plans to borrow in Chinese yuan with panda bonds and samurai bonds denominated in Japanese yen.

The minister also drew attention to Turkey's credit default swaps (CDS) that have recorded profound improvement in the last few months. According to Thursday's data, Turkey's CDS was down 4.05 percent at 292.4 points.

After price stability started to see disruptions following the high currency volatility in August and September of last year, Turkey's consumer price index hit a 15-year high rate of 25.2 percent in October. Inflationary pressures prompted the central bank to raise its benchmark rate by 625 basis points from 17.75 percent to 24 percent on Sept. 13, 2018. The bank has not changed the interest rates since then.

Speaking of the inflation in his address yesterday, Albayrak said a number of measures were taken over the recent period to tame inflation.

Food prices in Turkey recently spiked due to a major decrease in supply emanating from seasonal conditions, increasing costs and price speculation by wholesale distributors. In order to counter price disruptions, the Turkish government, with the help of local municipalities, launched direct sale points Monday in Ankara and Istanbul.

The shops, serving 51 venues from central locations in Istanbul of the province's 34 urban districts and 15 locations in Ankara, offer the most-consumed staple vegetables, such as tomatoes, onions, potatoes and eggplant, at affordable prices.

Albayrak said there was also demand from İzmir as well as other cities for this kind of practice to be introduced, adding that they have initiated studies for direct sale points in İzmir.

He said that municipal direct sale points have been effective in cutting down food prices at chain grocery stores.