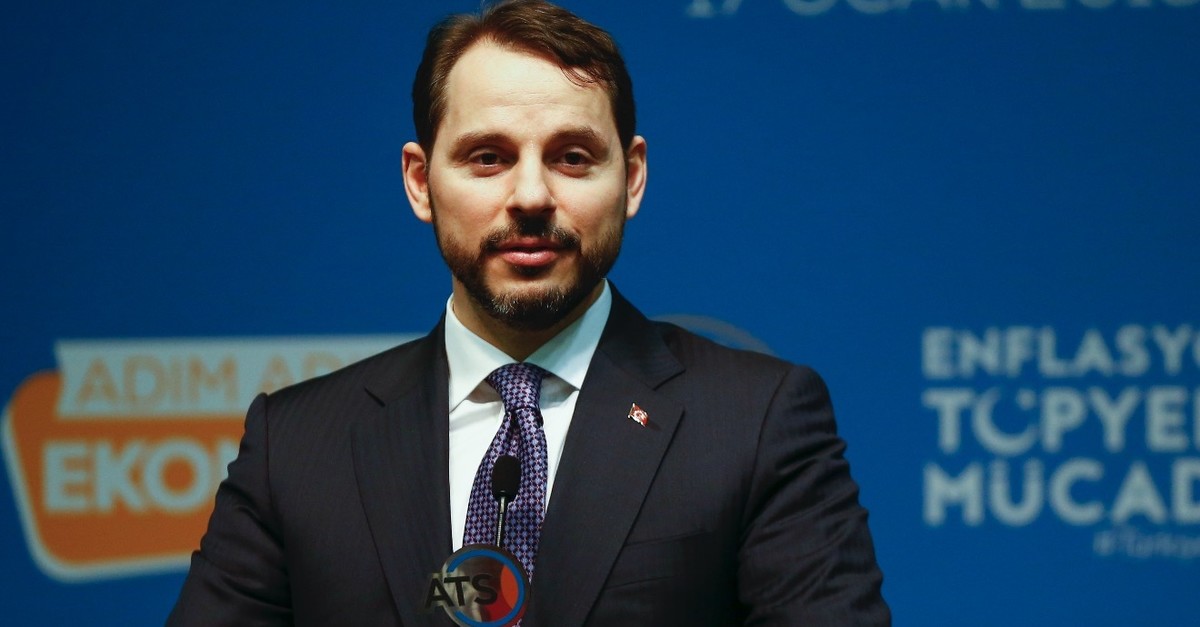 Treasury and Finance Minister Berat Albayrak speaks at an event attended by representatives of the Turkish business world in Antalya, Jan. 17, 2019.
by Daily Sabah Feb 22, 2019 12:14 am

Developments in the Turkish economy will be much better in the following months after the country went through a strong and successful rebalancing process, following the significant fluctuations in the second half of last year, Treasury and Finance Minister Albayrak said

Turkey has gone through a very serious balancing process economically after a dynamic and turbulent period in the second half of 2018. Stabilization in the Turkish markets was ensured with the determined and strong stance the country put forth and the strong measures implemented by the economy administration. Treasury and Finance Minister Berat Albayrak said the rebalancing period has been successfully left behind and will be followed by even better developments in the coming months.

In an interview with a private television channel on Wednesday, during which he touched upon the developments in the Turkish economy, Albayrak said, "This is the first time we have had such strong and rapid recovery," stressing Turkey has a strong infrastructure that will be affected by the global scale to a minimum degree.

Albayrak underlined that Turkey has been undergoing a very serious rebalancing process economically, pointing to the contributions of the strong will of President Recep Tayyip Erdoğan and the nation in this process.

Touching upon the events that took place in the few years, including the country's fight against terrorist organizations, the Gezi Park events and the failed coup attempt on July 15, 2016, the minister said Turkey has been through a very intense election process, as well as various tests in terms of stability.

Albayrak said the country faced a very different economic test and attack in August, followed by the events in Venezuela and France. "Turkey's most important element is the strong management experience thanks to the stable stance of the president and the advantage of the new system, which is able to exhibit rapid reflexes and reactions," he added.

The swift reaction to the turbulence in the summer was facilitated by the presidential governance system, which ensures full coordination among executive administrations responsible for the economy. It officially began to operate on July 9 when President Recep Tayyip Erdoğan took oath and declared his Cabinet on July 10, following the June 24 elections last year.

"Thankfully, Turkey came out strong with all-out social cohesion," he said, recalling that Russia experienced similar economic crises in 2014 and 2015.

Highlighting that the 2018 financial crisis was mostly a Turkey-specific operation, the minister further explained in August and October, Turkey experienced close to 12 percent inflation with interest rates hitting 50 percent. "While some were trying to get Turkey into a spiral from which it would not recover, we went through a serious rebalancing process by having a very strong reaction to exchange rate and inflation," he continued.

After price stability started to see disruptions following the high currency volatility in August and September of last year, Turkey's consumer price index hit a 15-year high rate of 25.2 percent in October. Inflationary pressures prompted the central bank to raise its benchmark rate by 625 basis points from 17.75 percent to 24 percent on Sept. 13, 2018. The bank has not changed the interest rates since then.

Urged to take action and intervene in this process to relieve citizens of the burden, the government decided last week to establish stalls run by metropolitan municipalities in Istanbul and Ankara and sell vegetables at reasonable prices to average consumers.

The shops, serving 51 venues from central locations in Istanbul of the province's 34 urban districts, 15 locations in Ankara, and now initiated in many other provinces as well, offer the most-consumed staple vegetables, such as tomatoes, onions, potatoes and eggplant, at affordable prices.

Speaking of inflation during the interview, Albayrak said there were exorbitant increases with the announcement of the inflation figure. He said they established a center in Istanbul to monitor price increases instantly and in a coordinated manner.

The minister announced for the first time that the mastermind behind the municipal direct sale points was President Erdoğan as part of social work and to prevent opportunism.

"We then decided to take a step with the Council of Ministers in coordination with the instructions of Mr. President," he added, underlining that the state must be present in the strategic areas.

Following growing tensions in the global financial system and political conjuncture, the minister said they knew that as Turkey, "We would take steps toward a new period of financial architecture. We opened the door of a period with more responsibility."

Saying in August and September, Turkey demonstrated very strong performance thanks to strong dialogue, communication, as well as rapid decisions and steps, followed by a decrease in the exchange rate from the 7.20s to the 5.90s in late September, Minister Albayrak stressed, "We saw the interest rates fall from around 50 to 30, and now below 20," he added, suggesting that after the local elections, developments in the economy will be much better in the following months.

"Turkey took up the reins in a very strong manner in three major criticisms of the economic dynamics and the balance of economy – namely budget discipline – the fight against inflation and current balancing. For the first time we have experienced strong and rapid recovery," Minister Albayrak said, adding that the economy has a stronger stance than it had been for 17 years. "Although it is a difficult period, the messages we receive show it will be better in February, March and April. We will perform much better than we aimed to," he added.