US, China rush to seal deal ahead of Trump's deadline this week 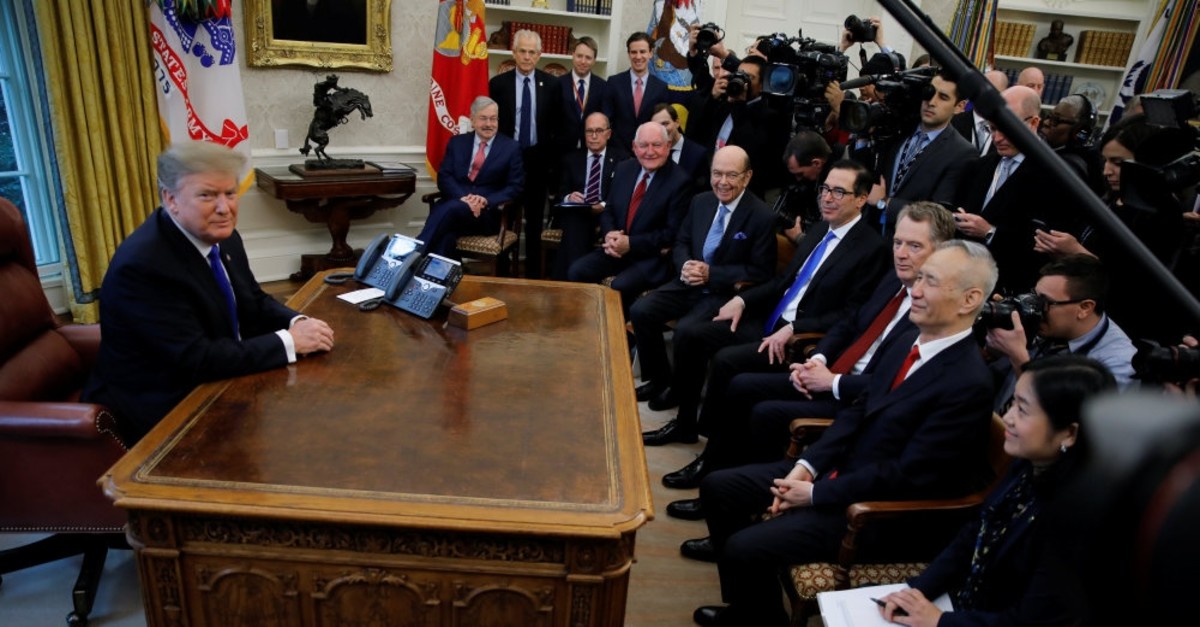 U.S. and Chinese trade delegations, who have been meeting for trade talks for five days straight, were set to continue their negotiations yesterday, looking for a deal ahead of a deadline this week

U.S. and Chinese negotiators met for over seven hours on Saturday to resolve their trade dispute and avoid an escalation of the tit-for-tat tariffs that have already disrupted global commerce, slowed the world economy and roiled financial markets. The two sides were also expected to meet yesterday as they race to seal an agreement before a March 1 deadline imposed by U.S. President Donald Trump, who has threatened to dramatically hike tariffs on Chinese goods unless there is a deal.

Saturday marked the fifth straight day of the negotiations between the world's two biggest economies. Talks were extended through the weekend after both sides reported progress in narrowing their differences.

The Chinese delegation is scheduled to leave for Beijing today, according to a person familiar with their itinerary. This is the fourth round of negotiations since Washington and Beijing agreed to a ceasefire in their trade war.

Trump, who has embraced an "America First" policy aimed at rebalancing global trade in favor of the United States, said on Friday there was "a very good chance" a deal would be struck, and that he was inclined to extend his March 1 tariff deadline and meet soon with Chinese President Xi Jinping.

Extending the deadline would mean putting on hold a scheduled increase in tariffs to 25 percent from 10 percent on $200 billion of Chinese imports into the United States.

Trump and U.S. Treasury Secretary Steven Mnuchin said U.S. and Chinese officials had reached an agreement on currency issues, but did not give details. U.S. officials have long argued that China's yuan is undervalued, giving it a trade advantage and partly offsetting U.S. tariffs. China has also committed to buy an additional 10 million metric tons of U.S. soybeans.

Reuters reported exclusively on Wednesday that both sides were drafting memorandums of understanding (MOUs) on cyber theft, intellectual property rights, services, agriculture and non-tariff barriers to trade, including subsidies.

On Friday, Trump said he did not like MOUs because they are short-term in nature, and he wanted a long-term deal.

An industry source briefed on the talks said both sides have narrowed their differences on intellectual property rights, market access and narrowing a nearly $400 billion U.S. trade deficit with China. But bigger differences remain on changes to China's treatment of state-owned enterprises, subsidies, forced technology transfers and cyber theft.

There is no agreement on the enforcement mechanism, either. The United States wants a strong mechanism to ensure the Chinese reform commitments are followed through, while Beijing insists upon what it calls a "fair and objective" process.

"Enforcement is a difficult puzzle," said the source, who requested anonymity to speak candidly about the talks. "You need objective arbitrators to make a decision."

It was not clear whether Saturday's talks managed to iron out those differences. Neither side shared the details of the day's discussions.

Trump said the biggest decisions could be reached when he meets with Xi, probably in Florida next month, and that they may extend beyond trade to encompass Chinese telecommunications companies Huawei Technologies and ZTE Corp.