Inflation to see single-digits by September with structural measures 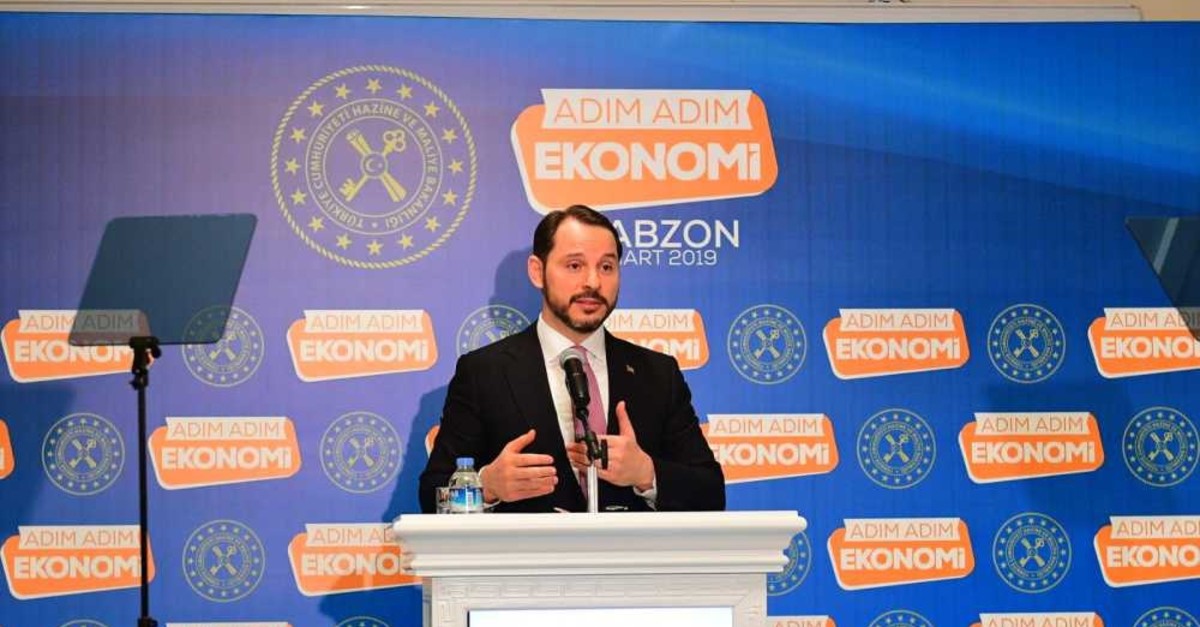 Turkey will witness single-digit inflation by this September thanks to structural measures that will be implemented by the government, Treasury and Finance Minister Albayrak said

Turkey will see inflation dropping to single digits around September, according to Treasury and Finance Minister Berat Albayrak. In his keynote speech at an event in the Black Sea province of Trabzon on Monday, Albayrak said, "With seasonal conditions supporting food production, structural steps we will take to eliminate rigidities in prices and most importantly the impact of base effect, inflation will fall to single digits around September." The Turkish economy has been tackling high inflation for the last year. Consumer prices peaked in October and hit 25.24 percent. In February this year, inflation fell below the 20 percent threshold for the first time since September.

Sustainable tight monetary policy, fiscal discipline and other measures such as direct sales points have made a major contribution to the improvement in the inflation rate.

Turkey saw an annual rise of 19.67 percent in consumer prices in February, according to the Turkish Statistical Institute (TurkStat). Last month, annual inflation went down 0.68 percentage points from 20.35 percent in January.

The downward trend in consumer prices, which became more visible in February figures, has been accomplished by the government's measures to control food prices and the central bank's tight monetary policy, strictly sustained since September when the bank increased the interest rates to 24 percent from the previous rate of 17.75 percent.

Indicating that Turkey has suffered a lot in the past due to high inflation, Albayrak said high inflation expectations and, in this context, production and consumption negatively affect stability, as well as international competition and interest rates.

"For this reason, one of the first priorities of our program [the New Economic Program] is to achieve a permanent decline in inflation and to capture single-digit levels," he said. "Last October, we tested and saw over 25 percent and closed 2018 below the target with the steps taken along with the all-out fight against inflation."

On Feb. 11, local municipalities in Istanbul and Ankara launched direct sale points as part of the government's effort to fight inflation and bring economic benefits to average citizens following a sharp increase in the price of fruit and vegetables, offering agricultural products to average consumers at an affordable price. This practice was later adopted in other provinces as well.

The sale points, launched to circumvent middlemen and profiteers, have seen widespread demand from citizens. With the start of vegetable sales at municipal direct sales points, prices in wholesale vegetable markets and supermarket chains dropped by half.

Stating that they are "strict and determined" in the fight against inflation, Albayrak said the state will intervene when needed.

The minister further stressed that they reduced these inflationary pressures caused by seasonal effects.

"Based on the measures we have implemented with stability, we brought inflation to around 19 percent, with the February figures recorded below the monthly expectations," he noted. "We set the inflation year-end target for 2019 at 15.9 percent, but it will be much lower, which means costs and interest rates, as well as this process and liquidity, are coming to a better point," the minister said.

In Turkey's New Economic Program (NEP) announced in September 2018, the country's inflation rate target is 15.9 percent this year, 9.8 percent next year and 6.0 percent in 2021.

In January, the Central Bank of the Republic of Turkey revised its year-end inflation forecast, dropping to 14.6 percent from 15.2 percent. Over the last decade, annual inflation saw its lowest level at 3.99 percent in March 2011, while it peaked at 25.24 percent in October 2018.

Albayrak said that they will enter a much more positive process with the implementation of many reforms. Recalling that the recovery in credit growth started and that the increase on the credit side in February was around TL 43.5 billion, Albayrak added in the first two and a half months of the year, approximately TL 70 billion was introduced to the market.

"We are currently taking the first steps for radical and permanent transformation. We will reduce interest rates and inflation to single-digit figures as soon as possible," he said, highlighting the indicators in exports and tourism are quite positive as well.

With regard to employment, he underlined that improvement will be observed in the employment figures to be announced and that employment commitments will be followed, and the necessary steps will be taken in this regard.

"Since we took office in August, we had to face and struggle with various challenges. We displayed a strong stance in the face of financial fluctuations in our country. We reacted quickly to the problems we encountered. Turkey showed a strong reaction in a short period of six months," he continued. "Significant steps were taken in a period of three to five months. Our most important road map was the new economic program that we introduced when we took office."

Minister Albayrak explained that Turkey is entering a period of current surplus in the summer months due to tourism and agriculture, which will be moved to better points with positive developments in the real sector. Recalling the contraction that stemmed from the banks' credit calls in October, November and December stopped with steps taken in January, February and March, Albayrak said they took many steps in the short term to reduce the fragility of the economy.

"After October, interest rates have begun to fall to the 20s and below. The business world sees the political and operational side very well. There will be no elections in the next four and a half years. The process will enter a much more stable period," Minister Albayrak said. "We will see positive developments with the second quarter. The worst is left behind. Turkey has shown a very fast reflex. We will continue to disappoint some circles just as we overcame the speculative attacks in August. With May, we will set forth a better 2019 than targeted in all indicators."