Finance Minister busy with high-level meetings in US, despite smear campaign 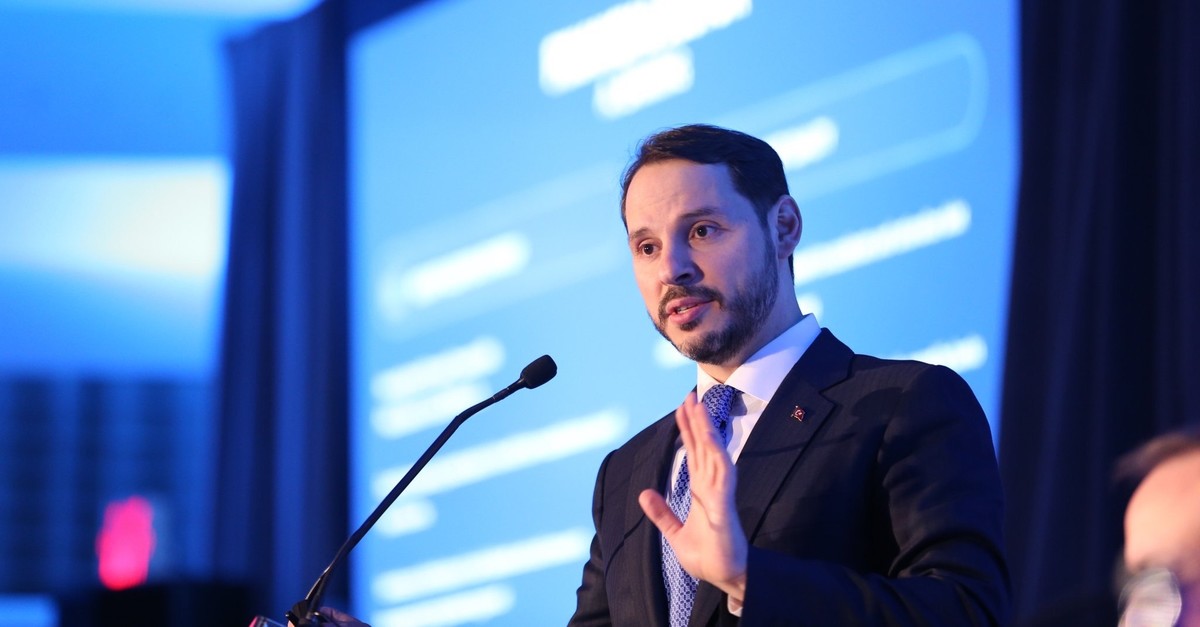 Having attracted great attention from investors, Treasury and Finance Minister Albayrak met a number of his foreign counterparts, international funds and financial institutions during his busy agenda in Washington

He spoke of steps to strengthen bank balance sheets and increase asset quality and saving strategies to provide over 10 percent of national income to Turkey in five years, adding more details would be shared with the public by the relevant institutions in a short time. On the first day, Albayrak also held a meeting with Suma Chakrabarti, the head of the European Bank for Reconstruction and Development (EBRD), and his delegation to discuss the bank's investments in Turkey.

On Thursday, Minister Albayrak also attended the investor meeting organized by JPMorgan Chase with more than 400 funds and investors in attendance. "There has not been such a crowded meeting for a long time," participants said.

Turkey does not need the IMF

In the meeting, Albayrak made a comprehensive presentation, especially on the targets and realizations of the new economic program, Turkey's debt structure and the new reform package. Answering the questions from participants, Albayrak was once again clear that Turkey does not need the IMF.

Late on Thursday, Albayrak tweeted: "We explained our Structural Reform Steps package and the economic policies of the new period at the investor meeting organized by JPMorgan."

While foreign investors showed great interest in Thursday's meeting, foreign media outlets, including Reuters, Bloomberg and the Financial Times, launched a smear campaign against Minister Albayrak and the Turkish economy.

To create a negative perception of the Turkish economy, these news outlets initially implied that the country would not be able to overcome the currency rate-related crisis and foreign investors would refrain from investing.

For instance, Reuters published an article following Minister Albayrak's remarks during a meeting with investors, claiming that his meeting left "investors unconvinced in Washington." Contrary to the Reuters story, investors welcomed Albayrak's pledges regarding the new reform package.

Turkey entered an era of long-awaited reforms following the March 31 elections. The new reform package covers a wide area from banking to insurance, inflation, agriculture and the judicial sphere. The financial reforms will delve into all areas of the financial sector to reinforce the capital structure of private and public lenders.

In addition to the financial sector, the second area of reform efforts will concentrate on inflation. To tackle food inflation, a new agricultural policy will be announced in May. With master plans for logistics, exports, and tourism, the country aims to increase revenues and support development.

Turkey's reforms in the upcoming period will also be implemented in the judicial sphere since the relation between a fair and effective legal system and strong and sustainable economic development is crystal clear.

The events of the last six months were also brought up during the meetings. Media reports quoted investors as saying, "After August, we did not think Turkey could turn this tough bend," while another participant praised Turkey's performance saying: "Your six-month performance is admirable. This successful performance was a very important message and credit in terms of markets."

"It was very productive. Of course, the prominent issue was the new reform package in which investors were quite interested," reports cited ministry sources as saying. "They wanted to learn a lot of details. Our minister was quite clear about implementing the commitments. They also shared details on various topics. It was extremely helpful. All issues were handled in a friendly way."

Furthermore, in his official programs, Albayrak explained Turkey's views on the agenda and held some important talks, spearheaded by his meeting with the U.S. Treasury Secretary Mnuchin. Steps to increase economic cooperation between the two countries were reportedly discussed in the meeting.

Following the IMF and World Bank meetings, the treasury and finance minister is to attend the 37th Annual Conference on U.S.-Turkey Relations organized under the theme "Back to Business: Maintaining Partnership in Difficult Times."

The three-day event, from yesterday until tomorrow, organized by the Foreign Economic Relations Board of Turkey (DEİK), the Turkey-U.S. Business Council (TAİK) and the American-Turkish Council (ATC), will discuss ways to reach a $75 billion bilateral trade target. An increase of Turkey-U.S. trade volume, currently close to $21 billion, to $75 billion has been one of the most-discussed topics in recent phone calls between President Recep Tayyip Erdoğan and U.S. President Donald Trump, who agreed to further enhance economic relations.

On the U.S. side will be Commerce Secretary Wilbur Ross, National Security Adviser John Bolton, Chairman of the Joint Chiefs of Staff Gen. Joseph F. Dunford and Deputy Secretary of Energy Dan Brouillette. Senior Adviser to President Trump Jared Kushner is also confirmed to be attending.