Turkey, US establish working group to reach $75B in bilateral trade 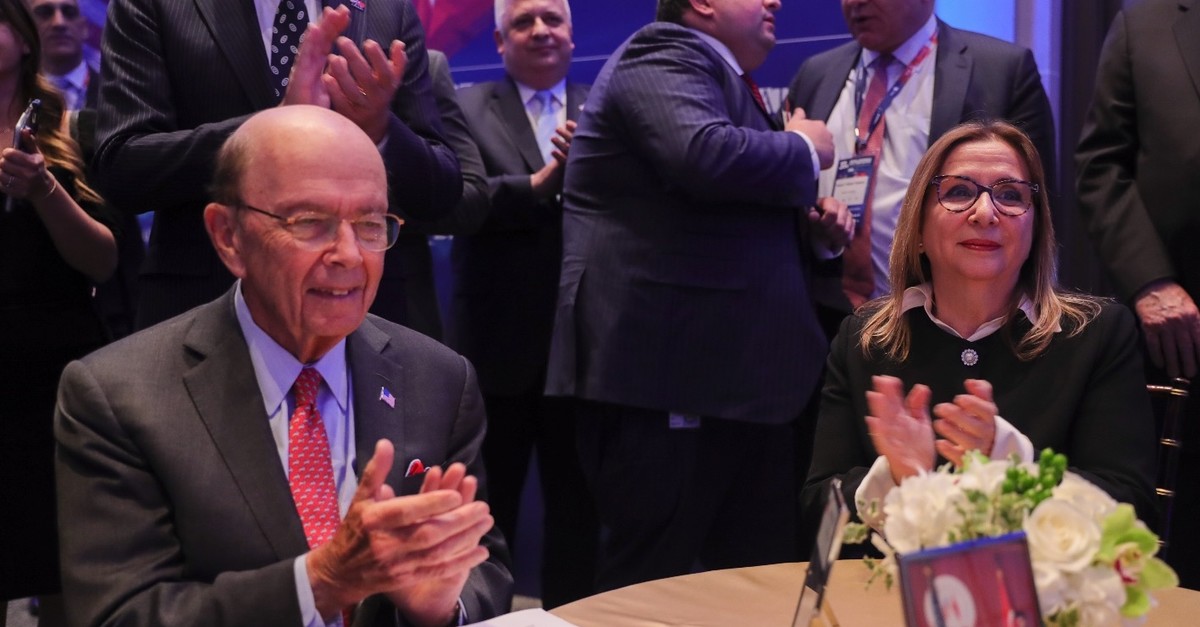 Trade Minister Ruhsar Pekcan (R) and U.S. Secretary of Commerce Wilbur Ross discussed ways to boost bilateral trade volume and the establishment of a joint working group to accomplish that goal during 37th Annual Conference on Turkey-U.S. Relations
by Daily Sabah with AA Apr 22, 2019 12:07 am

With a view to reaching $75 billion in bilateral trade, a target set by President Recep Tayyip Erdoğan and U.S. President Donald Trump in February, Turkish and American authorities are setting up a joint working up. Organized by the Turkey-U.S. Business Council (TAİK) and America-Turkish Council (ATC), the 37th Annual Conference on Turkey-U.S. Relations in Washington, D.C., last week highlighted that the two allies must expand economic partnerships to fortify their political relations, which have soured in the recent years. Trade Minister Ruhsar Pekcan said her meetings with U.S. Secretary of Commerce Wilbur Ross and Trump's senior adviser Jared Kushner were very productive. Pointing to the fact that Turkey and the U.S. are allies, Pekcan said both countries have major trade relations that carry huge potential.

Trade Minister Pekcan said that the trade volume between the two countries is currently $20.7 billion. "We will accelerate our efforts to raise the trade volume to $75 billion, as agreed by President Erdoğan and President Trump. We agreed with the U.S. secretary of commerce that there is a need to collaborate on the diversification of tradable products and a better use of the existing potential. We are forming a joint technical working group between the U.S. Department of Commerce and our Ministry of Trade, in line with the objective of increasing the trade volume between the two countries to $75 billion," she told Anadolu Agency (AA) in a statement.

"We are working on programs that would increase our exports to the U.S., particularly the common trade potential report and high-tech products," she said.

From a historical perspective, early economic dialogue between Turkey and the U.S. began with the Economic and Technical Cooperation agreement signed in 1947 with a view of implementing the Truman Doctrine in the aftermath of World War II. While the strategic political and military cooperation expanded with Turkey's membership in NATO in 1952, the economic partnership grew exponentially as Turkey welcomed more American companies.

Although overall U.S.-Turkey bilateral trade jumped from $10.8 billion in 2009 to $20.5 billion in 2018, it remains modest compared to its potential. Therefore, President Erdoğan and U.S. President Donald Trump agreed to raise the trade volume to $75 billion.

According to the minister, the Trade Ministry aims to establish free zones, specialized in research and development (R&D)-intense, high-tech and high added-value activities.

Emphasizing that they invited American companies to invest in these zones, Pekcan said: "In our meetings, there were also U.S. investors interested in specialized free zones that the Ministry of Trade will establish. These places may be Turkish-American cooperation zones. American high-tech companies can invest in these zones either on their own or together with Turkish companies. We are ready to provide support to those who will invest in our free zones," Pekcan said.

During her meetings, Pekcan conveyed Turkey's request to remove additional customs duties imposed on Turkish iron and steel products by the U.S., which has long-dominated the trade agenda between the two countries; Turkey remaining in the U.S. Generalized System of Preferences and being exempt from the measures introduced in the automotive industry were also discussed.

Pekcan said they decided to make channels of dialogue like the U.S.-Turkey Business Council (TAİK) more effective under the presidency of the two ministries, expressing that the objective is to remove all barriers to trade.

She added that they will seize every opportunity to achieve a trading volume of $75 billion, balanced trade and a two-sided increase in investments, industrial products and tourism, and they will focus on all products and sectors within this scope.