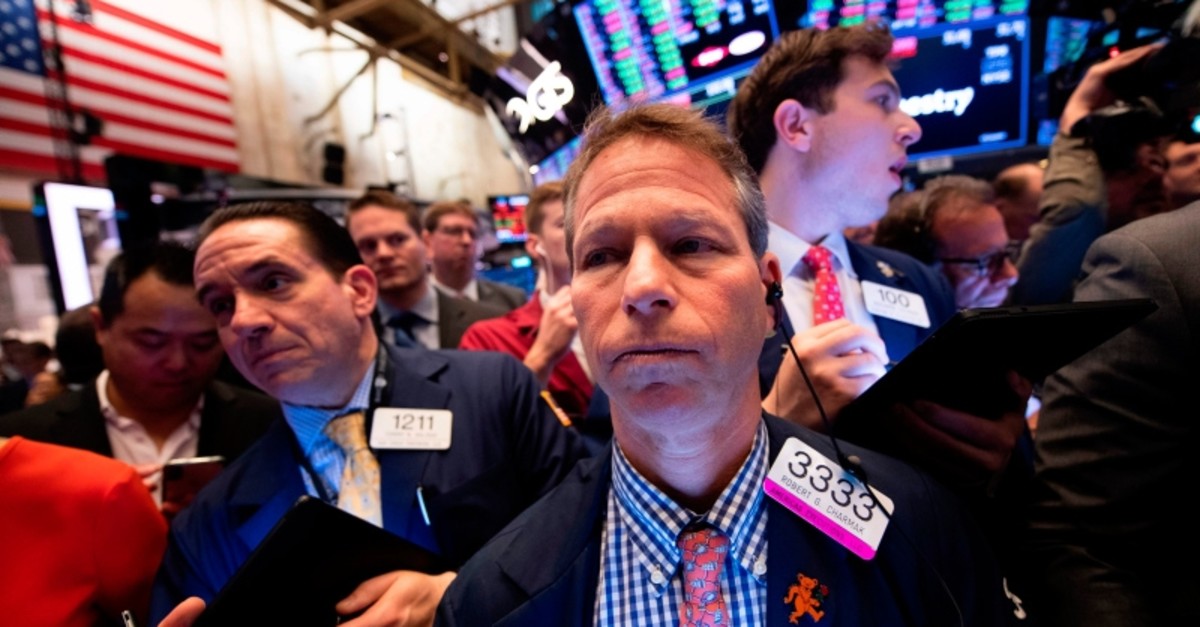 Traders work after the opening bell during the IPO of the ride sharing company Uber at the New York Stock Exchange (NYSE) on May 10, 2019 located on Wall Street in New York City. (AFP Photo)
by reuters
May 13, 2019 7:36 pm

At the heart of the selloff were shares in major technology companies including Apple Inc as well as chipmakers, manufacturers and retailers that draw large chunks of their revenue from China.

Apple's shares fell 5.2%, putting the S&P and the Dow on track for their biggest one-day percentage drop since Jan.3.

The selloff that began with stocks surfing at an all-time high on May 1 has now knocked almost 5 percent off the S&P 500 in less than two weeks.

That still compares favorably with a 20% fall between Oct.3 and Christmas of last year, but it has traders again talking about the end of a decade-long rally that dates back to the aftermath of the 2008 financial crash.

The front part of the U.S. interest rate yield curve, running from three-month U.S. Treasury bills through to 10-year notes, inverted for the second time in less than a week and is seen as a classic signal that a recession is coming.

"The selloff is a reflection that trade talks are in worse shape than people were expecting," said Willie Delwiche, investment strategist at Baird in Milwaukee.

"Investors are trying to figure out how much of the rally that we had this year was perhaps celebrating prematurely hopes of a trade deal."

China's finance ministry said on Monday it planned to impose tariffs ranging from 5% to 25% on 5,140 U.S. products on a target list worth about $60 billion from June 1, striking back after the United States raised duties last week.

Bank of America Merrill analysts said the new Chinese tariffs posed a downside risk of between 1% and 3% for S&P 500 company earnings in 2019.

The S&P 500 and the Nasdaq hit record highs just two weeks ago on hopes of a trade deal and a positive first-quarter earnings season. Last week's 2.2% fall was the worst for the benchmark index since December.

The Philadelphia chip index was down 4.2%, adding to a 6% decline last week. Qualcomm Inc, Broadcom Inc and Nvidia Corp all fell between 3% and 4.4%.

Banks, which suffer from the fall in long-term rates below short-term funding costs, fell 2.7%.