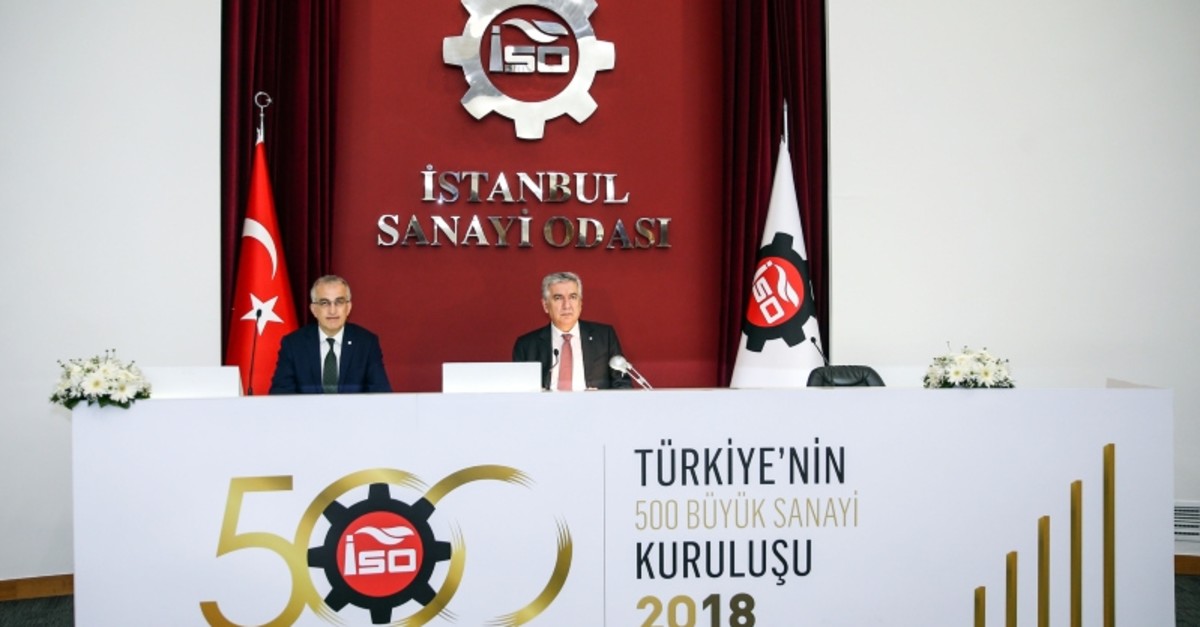 Istanbul Chamber of Industry (ICI) Chairman Erdal Bahu00e7u0131van and Deputy Chairman Irfan u00d6zhamaratlu0131 announce the results of Top 500 Industrial Enterprises of Turkey 2018 Survey during a press conference in Istanbul, on May 28, 2019. (AA Photo)
by Daily Sabah with Agencies May 28, 2019 4:12 pm

ISO Board Chairman Erdal Bahçıvan announced Tuesday the results of the "Top 500 Industrial Enterprises of Turkey 2018 Survey" in a news conference. Accordingly, the refinery giant Tüpraş continued its longtime leadership to be Turkey's top industrial enterprise with production-based sales worth 79 billion Turkish liras ($14.9 billion) in 2018.

The top 500 Turkish enterprises posted a total of TL 878 billion ($165.7 billion) production-based sales in 2018, up 34.5% from the previous year. Increasing prices and foreign exchange rates were key factors in this rapid growth, according to the survey. The U.S. dollar / Turkish lira rate was 5.30 as of the end of 2018, reaching as high as 7.20 in August.

The operational profit rate of 500 enterprises' rose by 1.3 percentage point to 10.9%, coming to TL 107.8 billion ($20.34 billion), in the last year. Ordinary income and profits from other operations amounted to TL 270 billion, while ordinary expenses and losses from other activities stood at TL 214.2 billion in this period. Excluding the difference between these two items, net non-operating income was recorded as TL 55.8 billion. Net foreign exchange profits constituted TL 31.5 billion of this figure, while the remaining TL 24.3 billion included many items such as interest, participation and dividend income.

The increased interest rates in the second half of 2018 and the rise in inflation due to the depreciation of Turkish lira constituted negative financial conditions for the top 500. The share of financing expenses of the top 500 enterprises within operational profits rose from 49.8% to 88.9%, marking the most negative level since the ISO started announcing data on Turkey's top 500 companies in 1968. Bahçıvan said that this means almost all profits have been spared for financing costs.

The share of liabilities in operation financing increased by 4.1 percentage points to 67% percent. Financial liabilities, which continued to grow in real terms by doubling the rate of increase compared to the previous year, increased by 35.3% from TL 242.9 billion to TL 328.6 billion. The number of companies posting losses increased from 78 to 119, 24% of all 500.

Ebitda size of the top 500 enterprises increased by 48% to reach TL 140.2 billion, posting a six-year-high increase.

The employment of ISO 500 saw an increase of 2.4% from the previous year and stood at over 690,000 people last year. The average increase in salaries and payment was 20.2%, slightly below the annual average inflation rate of 20.3%.

Recalling that the minimum level to make the İSO 500 list with production-based sales turnover rose from TL 309 million to TL 414 million, Bahçıvan noted that the number of exporting companies rose from 398 three decades ago to 464 today.