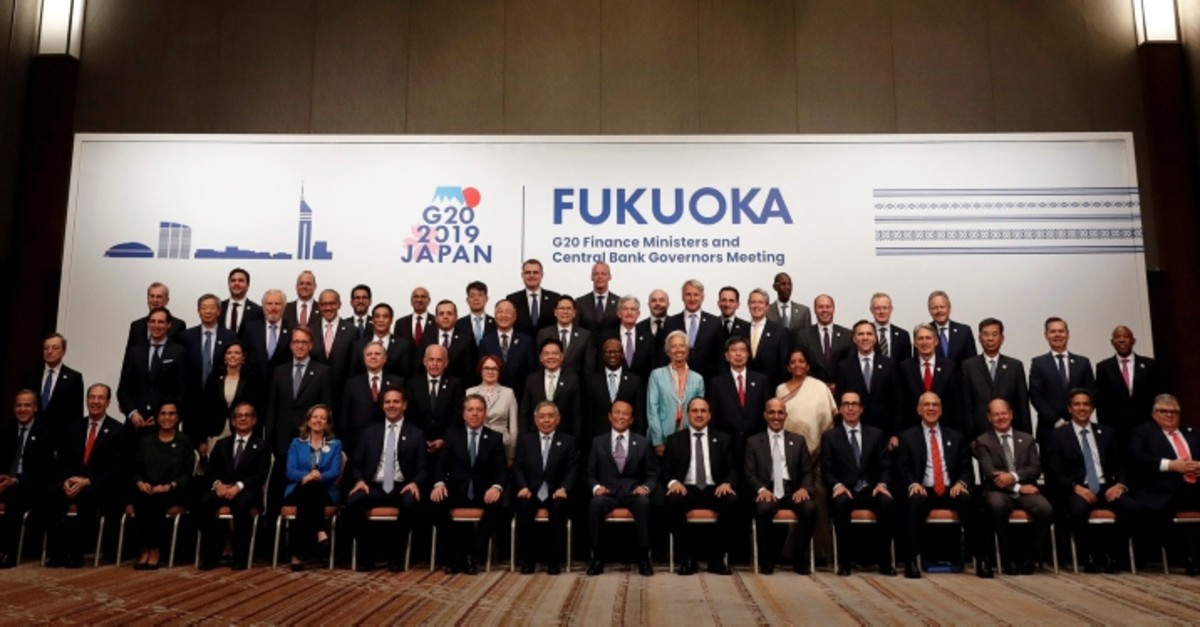 Finance ministers and central bank chiefs from the Group of 20 major economies wrapped up a meeting in Japan on Sunday with a pledge to use all the policies they can to protect global growth.

The G-20 finance leaders said in a joint communique that risks from trade and geopolitical tensions were "intensifying."

"We reaffirm our commitment to use all policy tools to achieve strong, sustainable, balanced and inclusive growth, and safeguard against downside risks," the leaders said. They added that despite the risks, global growth appeared to be stabilizing and was expected to pick up later this year and next year.

The leaders spent the weekend haggling over issues ranging from taxes to debt and artificial intelligence as China and the U.S. showed no sign of breaking their stalemate over trade and technology.

U.S. Treasury Secretary Steven Mnuchin said he had a constructive meeting with China's central bank Gov. Yi Gang on the sidelines of a financial leaders' meeting in the southern city of Fukuoka.

In a Twitter post that showed the two clasping hands, he said they "had a candid discussion on trade issues." He gave no details.

The closed-door talks in Fukuoka, and parallel talks on trade and "digital economy" issues in Tsukuba, a city north of Tokyo, took place as the world's two largest economies remained mired in a tariffs war over trade and technology. Talks stalled after 11 rounds of negotiations and both sides are threatening further action, adding to uncertainty and unnerving financial markets.

In diplomatic speak, the word "candid" often signals a degree of disagreement.

Mnuchin earlier urged China to rejoin the talks. So far, there has been no word of further negotiations, and he said any major progress in resolving the impasse would likely come at a meeting of Presidents Donald Trump and Xi Jinping during the G-20 summit in late June in Osaka.

Trump has yet to decide, he said, on whether to impose more 25% tariffs on $300 billion worth of Chinese exports.

There was no immediate word from the Chinese side about the meeting between Yi and Mnuchin.

After the Trump administration raised tariffs to up to 25% on $250 billion of imports from China and blacklisted telecommunications giant Huawei, China raised tariffs on rare earth exports to the U.S. and threatened to halt exports altogether.

Last week, China's Commerce Ministry said it will soon release a list of "unreliable" foreign companies in a move seen as a response to the U.S. decision to penalize Huawei for alleged theft of intellectual property and evasion of Iran sanctions.

The Communist Party newspaper People's Daily said Sunday that Beijing is creating a strong firewall to strengthen China's ability to innovate and to accelerate the development of key technologies.

"China ... will never allow certain countries to use China's technology to contain China's development and suppress Chinese enterprises," the newspaper said, without directly referring to the United States.

Japan, the world's third-largest economy, is hosting the G-20 for the first time since it was founded in 1999.

Reports said officials had reached agreement on the need to revamp tax systems, better regulate new areas such as artificial intelligence, reform the rules-making World Trade Organization and ensure transparency about the levels of debt incurred by developing countries.

The venue for the annual financial meeting, Fukuoka, is a thriving regional hub and base for startups. Much attention at the G-20 meetings this year has focused on how to adapt tax systems and regulation to the increasingly digital nature of business.

But the specter looming over all the meetings is what will become of global trade given the rancor between Washington and Beijing.

Mnuchin earlier acknowledged concern among fellow leaders over slowing world growth, though he said it was not due to the standoff with Beijing over trade and technology.

He and other members of the Trump administration maintain that the ripple effects of the billions of dollars in tariffs imposed by Washington on Chinese exports over the past year are creating new business opportunities for other businesses in the U.S. and other countries.