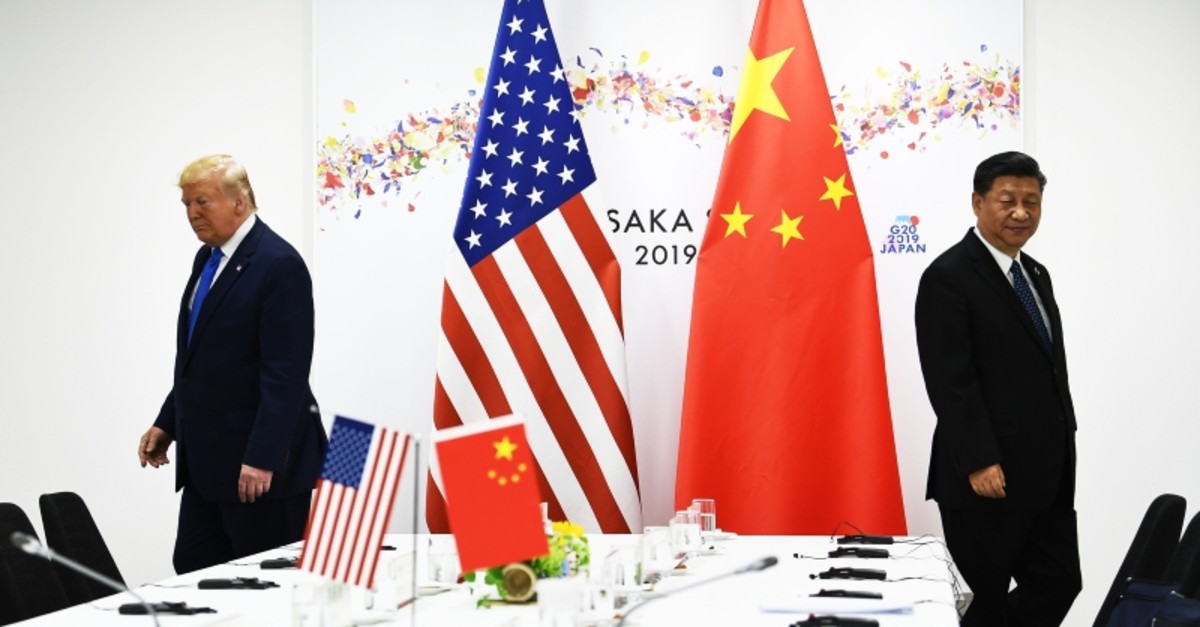 In this file photo taken on June 29, 2019 Chinese President Xi Jinping (R) and US President Donald Trump attend their bilateral meeting on the sidelines of the G20 Summit in Osaka. (AFP Photo)
by German Press Agency - DPA
Aug 24, 2019 1:04 am

The United States and China exchanged blows Friday as each side increased punitive tariffs on the other, intensifying a trade war that is threatening to engulf the global economy.

In a rapid back-and-forth, Beijing took action against $75 billion in American goods in response to US tariffs announced August 1, and President Donald Trump lashed out in return by increasing existing and planned tariffs on a total of $550 billion in Chinese products.

Trump's blistering Twitter screeds called into doubt chances for a quick resolution to the trade war between the world's economic superpowers, which by the end of the year will cover nearly all imports and exports exchanged between the two countries.

Accusing China of "taking advantage of the United States on Trade, Intellectual Property Theft, and much more," Trump said, "we must Balance this very.... ...unfair Trading Relationship."

And tariffs on $300 billion in products, due to take effect September 1 at 10 percent, will now be set at 15 percent, he said.

"China should not have put new Tariffs on 75 BILLION DOLLARS of United States product (politically motivated!)."

While Beijing worked for three weeks on its multi-tiered tariff response, Trump's promised retaliation -- which came in a signature tweetstorm -- was announced in less than 10 hours.

The rapidly changing conflict worries US companies, many of whom rely on China for inputs, for finished products they sell and for manufacturing.

"It's impossible for businesses to plan for the future in this type of environment," said David French of the National Retail Federation.

"The administration's approach clearly isn't working, and the answer isn't more taxes on American businesses and consumers. Where does this end?"

The attack came with Trump expected to ruffle feathers in France at the weekend meeting of leaders of the G7 nations. Tensions are mounting between Trump and the Europeans, Canada and Japan over trade tariffs.

The friction has already slowed US growth and undercut the global economy, and the threat of a deterioration sent stock markets falling sharply.

"Our great American companies are hereby ordered to immediately start looking for an alternative to China, including bringing... your companies HOME and making your products in the USA."

"We don't need China and, frankly, would be far... better off without them," Trump said.

It was unclear under what authority Trump could demand that private companies alter their production.

But the influential US Chamber of Commerce urged the two sides to return to the negotiating table to find a solution.

"While we share the president's frustration, we believe that continued, constructive engagement is the right way forward," Myron Brilliant, the business group's head of international affairs, said in a statement.

China's punitive tariffs of five to 10 percent will apply to 5,078 US items, and are timed to start in tandem with the new US duties set to take effect in two steps September 1 and December 15, China's state council tariff office said.

Beijing also announced it would reimpose a 25 percent tariff on US autos and a five percent tariff on auto parts, also starting December 15. China had lifted those tariffs earlier this year as a goodwill measure while trade talks were underway.

Trump already imposed steep tariffs on $250 billion in Chinese goods, with a further $300 billion in imports targeted in the coming rounds.

Beijing has hit back with duties on around $110 billion of US goods -- or nearly all of the $120 billion worth of American goods it imported last year.

Federal Reserve Chair Jerome Powell warned in a speech Friday that trade tensions were exacerbating the global slowdown and the central bank does not have a "rulebook" for dealing with the fallout.

An alarm bell went off in the US Treasury bond market last week when 10-year bond yields briefly fell below the yields offered on a two-year bond -- seen as a sign of looming recession -- and it happened again Friday.

US officials have said in recent days that trade talks with China would continue next month.

However China's commerce ministry spokesman Gao Feng said Thursday he had no information on the next round of meetings, while noting the two sides remain in contact.