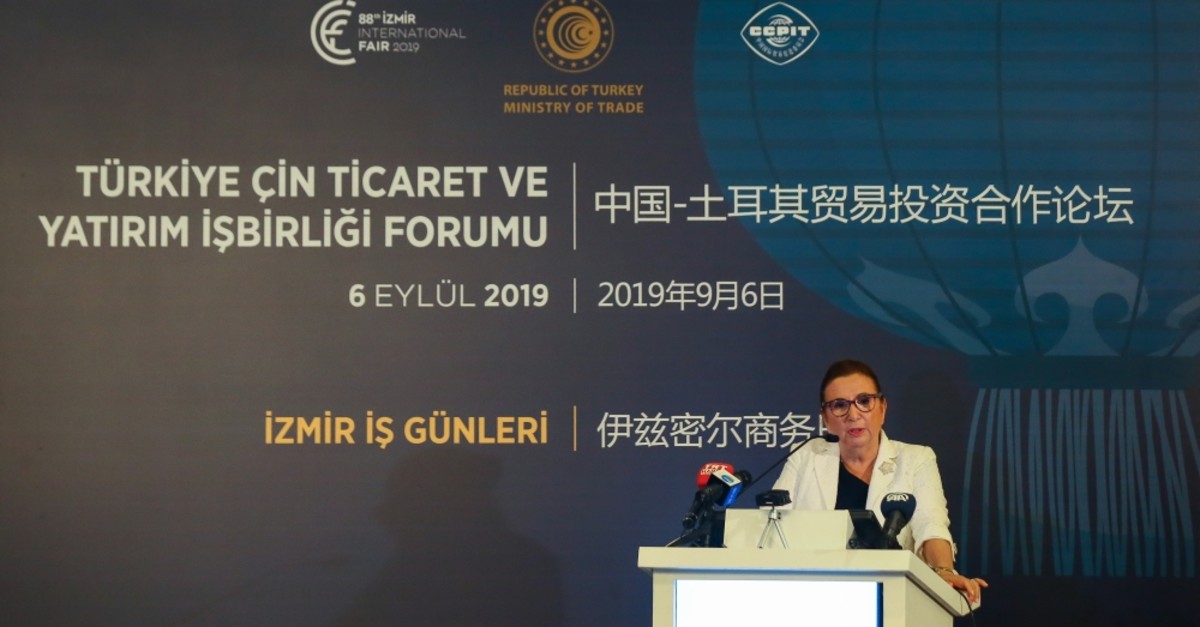 Turkish and Chinese authorities are seeking to ensure equilibrium in bilateral trade with the export of more Turkish products to the Far Eastern country, aiming to compensate for Turkey's trade deficit with China

With a bilateral trade volume surpassing $23.6 billion, China is Turkey's one of the biggest trade partners after Germany and Russia. Despite the importance of the Chinese market for Turkish trade, the bilateral trade volume has been more in favor of China as Turkey's exports to the second-largest economy in the world only totaled $2.9 billion. During a business forum held on Friday, Turkish and Chinese authorities agreed on ensuring balanced bilateral trade and economic relations. In her address at the Turkey-China Business Forum held as part of the 88th İzmir International Fair on Friday, Trade Minister Ruhsar Pekcan remarked, "China is now Turkey's biggest trading partner after Germany and Russia."

In the period from January to July, Turkey's exports to the Far Eastern nation were recorded at $1.47 billion while its imports from the country exceeded $10 billion. The two most important countries of the G20 platform, Turkey and China, are far below their potential. The cooperation between Turkey, the most dynamic economy of Europe, and China, the global power, will contribute to the economies of the Middle East, Balkans, and Europe," she stressed, expressing hope that the Turkish and Chinese business world would capture this synergy on the occasion of this fair without delay and that the two governments are ready to support these developments.

Pekcan said that they held a very successful meeting between the delegations in the city and decided to take serious steps at the forum. The minister noted that the cultural and commercial relationship between Turkey and China has a history of 5,000 years and pointed out that these ties between the two civilizations should carry on to mutual economic cooperation.

Explaining that China participated in the İzmir International Fair with approximately 61 companies and 150 people from nine different states, Minister Pekcan said these companies made fruitful negotiations for two days to improve trade and increase mutual investment.

"Our trade volume with China, which was $1.1 billion in 2001, reached $23.6 billion as of 2018. China has now become our biggest trading partner after Germany and Russia," she added.

The trade minister said that Turkey is set to participate in the China International Import Expo with 55 companies in November, pointing to Turkey's foreign trade deficit with China.

"Our imports stand at $20 billion compared to $3 billion in exports. We give most of our foreign trade deficit with China. We are working on how to stabilize this trade deficit without reducing or even increasing trade volume," she continued. "There are 61 Chinese investors in Turkey. The investment amount of Chinese companies in Turkey is around $1.6 billion. China's direct foreign investment in the world in 2018 alone is $129 billion. We see that Chinese investors are late to invest in Turkey. Turkey has the largest and most dynamic population in Europe, as well as the most competitive, the most efficient, the most hardworking workforce. It is very advantageous in terms of investments. As Turkey, we direct our strategies to technology-oriented projects in technological investments. There are many steps to take together."

She further addressed the Turkish companies.

"If China is not far to buy from, it is not far to sell to either. We have a lot of work to do, and we intend to do so," she said, inviting Chinese companies to expand to Africa and the Middle East together.

"China's state-run firms may pioneer the investments to be made in Turkey. Our business world needs visa facilitation," she said.

Li Chenggang, assistant minister of commerce of the People's Republic of China, said that Turkey became their third-largest trade partner, recalling that Turkish cherries came to the tables of Chinese citizens.

"Pistachios and dairy products will enter the Chinese market. We agreed on the development of more balanced trade and economic relations," Li Chenggang said. "Chinese companies' investments in infrastructure facilities in Turkey reached $15 billion. Investment cooperation has gained significant momentum. There is serious potential for tourism. Last year was declared 'Turkey Year' in China, and 400,000 tourists came to Turkey."

China's Ambassador to Turkey Deng Li, on the other hand, stated that in the summer, Turkish cherries went to China, followed by the signing of a protocol for pistachios to go to China.

"Dairy products may also enter China in the second half of this year. Turkey ranks fifth in the list of the most sought-after tourist destinations in China," Ambassador Deng Li noted.

Following their speeches, a cooperation and intention agreement was inked between the cities of İzmir and Chengdu and technology exchange and a cooperation agreement between the Shanghai International Technology Exchange Center and the İzmir Chamber of Commerce. This was followed by the signing of a memorandum of understanding between ICBC Turkey and China's Sichuan Airlines.

Turkey an important partner for China

Turkey's unique position in the Belt and Road Initiative (BRI) makes the country a gate to Europe and Africa for China's trade operations on the project's route.

The multibillion-dollar project was launched by Chinese President Xi Jinping in 2013 to jointly build the Silk Road Economic Belt and the 21st Century Maritime Silk Road and connect China to Central Asia and Europe, an area spanning more than 65 countries.

In order to increase connectivity on the BRI, the Turkish and Chinese transport ministries signed an agreement during Belt and Road Initiative Summit in Beijing in 2017, on an international passenger and cargo transport company. The agreement is expected to unlock international road transport channels between China and Europe, with Turkey constituting the middle corridor of the route. The agreement, which signifies China's willingness to render the Belt and Road initiative as integrated into Turkey's development strategy, will also help strengthen the exchange between China and Turkey, promoting the facilitation of international transportation among the countries located on the Silk Road.