Turkey, US set up sectoral groups to reach $100B bilateral trade 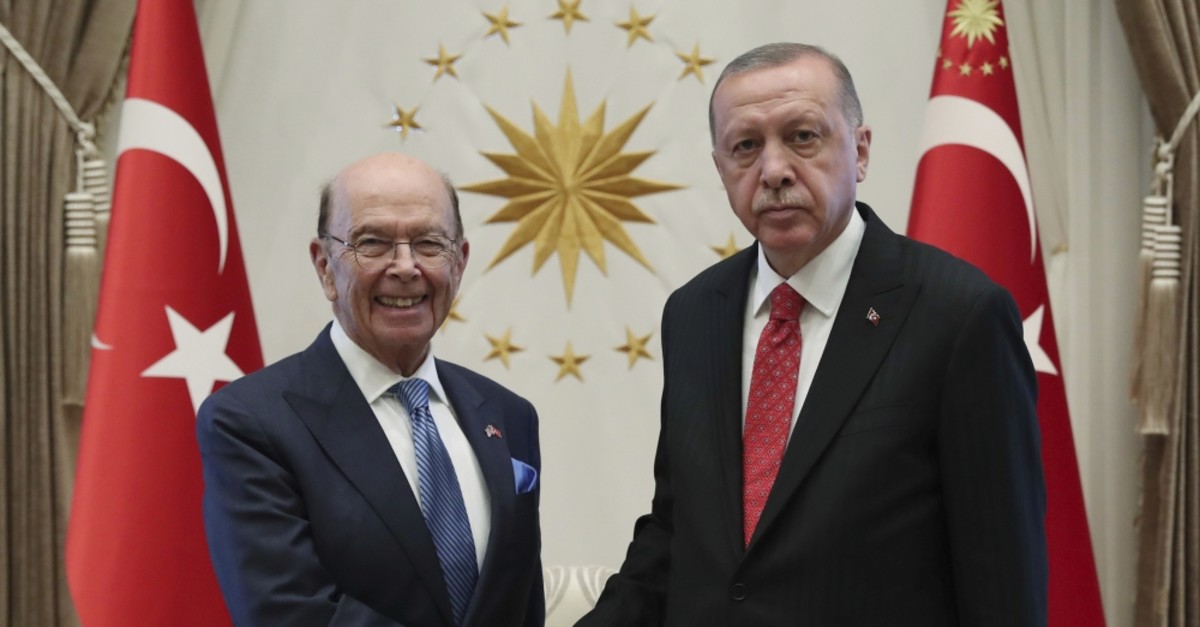 In order to better accomplish the $100 billion bilateral trade volume target, Turkish and U.S. officials held another round of meetings. While setting up sector-oriented committees yesterday, the two countries are also deliberating on a possible free trade agreement. President Recep Tayyip Erdoğan announced yesterday that he and his U.S. counterpart President Donald Trump agreed to kick-start free trade agreement talks and officials from both nations will begin preparations. "The initiation of free trade negotiations has also been included on our agenda," the president said following a meeting with U.S. Secretary of Commerce Wilbur Ross and his delegation. Erdoğan said the U.S. has been a long-time and like-minded ally of Ankara, even if the relations between the two nations soured from time to time due to disagreements. "Turkey is an important production and logistics base in its region. Taking advantage of this importance will benefit both countries," Erdoğan said.

Emphasizing his close friendship with President Trump, Erdoğan also said he and Trump agreed during their G20 meeting in June to increase the trade volume between the two countries from $20 billion to $100 billion. "There are more than 1,800 American firms operating in Turkey. We want more U.S. firms to invest in our country. We are prepared to assist every U.S. investor," Erdoğan said. Turkey's exports to the largest economy in the world were $8.3 billion, while it imports totaled $12.3 billion, according to data from the Turkish Statistical Institute (TurkStat). In the January to July period of this year, the sale of Turkish goods and products to the U.S. was $4.6 billion and U.S. exports to Turkey were $6.6 billion. The president also said he was hoping to "crown" his friendship with Trump by hosting him in Turkey.

Earlier Tuesday, Ross also met with Turkey's Trade Minister Ruhsar Pekcan. The American secretary said in a joint press conference with Pekcan that what they anticipate from the $100 billion trade target is for it to consist of $50 billion more from each side.

Stating that the target was many times higher than its current level, Ross added, "So we are anticipating that it would be very balanced and a greatly enlarged amount of trade."

During his five-day visit, the Turkish and American delegations discussed the steps to be taken in the shortest period, Ross confirmed. These steps will be approved by President Trump and Erdoğan as they are scheduled to meet on Sept. 25 during U.N. meetings, he added. Pekcan also confirmed that the commercial relations and mutual investments will be one of the agenda items of the Erdoğan-Trump meetings in New York.

The U.S. secretary of commerce also confirmed that he and his delegation met 43 American firms with investments in Turkey and 52 Turkish firms that aim to seize opportunities in the U.S. market.

The two sides decided to set up sectoral committees under the chairmanship of both countries' trade ministries, Pekcan said. The committees will bring Turkish and American business circles together and will lead to result-oriented projects to achieve the trade goal.

Turkey sees an opportunity to boost trade with the U.S. amid Washington's trade war with Beijing, Pekcan also said during her speech, reinforcing an ambitious goal of quadrupling the bilateral trade to $100 billion a year.

"We have determined that the issues between the U.S. and China will create a significant opportunity for trade in various sectors. We have expressed to the U.S. side our readiness to provide goods," she added.

Pekcan also expressed Turkey's demand for the removal of obstacles impeding the growth of bilateral trade.

"We mentioned the barriers in sectors such as iron and steel, the results of our removal from the Generalized System of Preferences [GSP], and possible measures to be implemented in the automobile sector," she said, adding: "We have passed our demands and suggestions to the U.S. side," the minister said.

The White House said in May it was ending a preferential trade agreement with Turkey, saying Turkey's level of economic development meant it was no longer eligible for the support.

According to the latest data, American companies paid over $10 million in new tariffs through June to the administration's choice to terminate GSP for Turkey. That is on top of the $25 million in tariffs paid in June on previously GSP-eligible products from India. The decisions played a major role in GSP savings plummeting to $66 million in June.

Among states hit the hardest were Missouri ($682,000 in tariffs paid) and Kentucky ($484,000), despite not generally being among the top states in overall GSP usage. In Missouri, new tariffs paid were almost exclusively on auto parts such as stampings, brakes and motor vehicle locks. In Kentucky, the biggest impacts were on food products, followed by gaskets/mechanical seals, according to the website renewgsptoday.com data.

Pekcan also explained that the delegations also exchange views on trade financing through TürkEximbank and U.S. Eximbank. "We will focus on investment opportunities in our respective countries and joint investment projects in third countries with the support of Turkish and American export-import banks," Pekcan said.