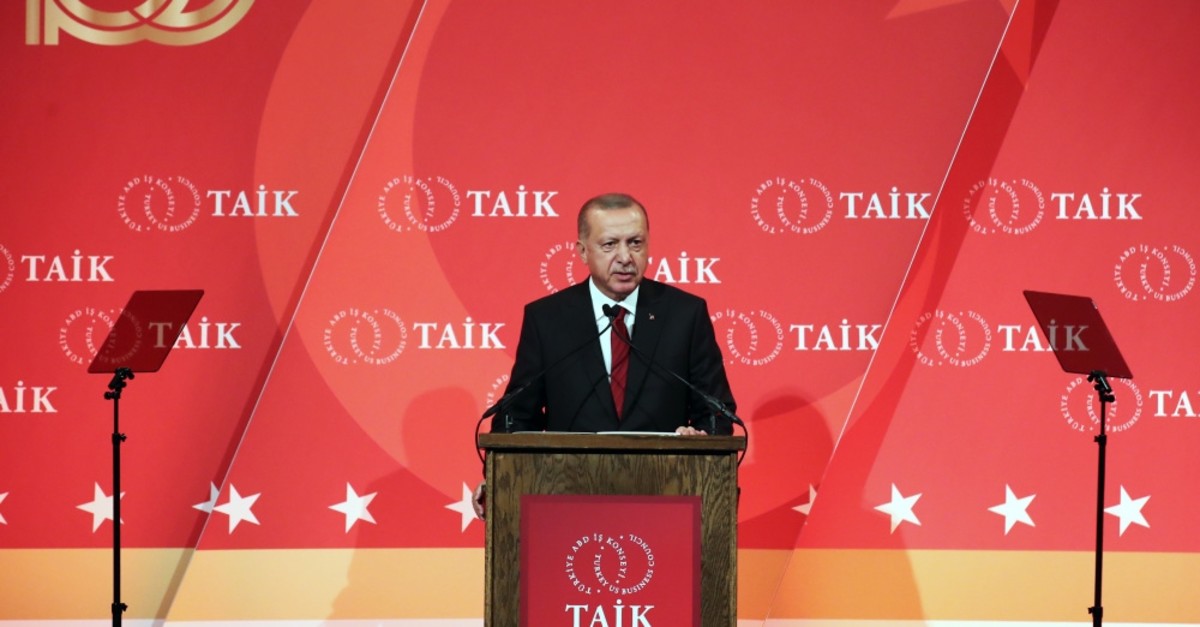 Having their ties severely tested recently, Turkey and the U.S. are now focusing on a positive agenda, with economic and commercial ties being the most important elements. This has been particularly reflected during President Recep Tayyip Erdoğan's visit this week to the U.S. to attend the 74th U.N. General Assembly. Accompanied by Treasury and Finance Minister Berat Albayrak, Trade Minister Ruhsar Pekcan and other ministers and officials, Erdoğan addressed the 10th Turkey Investment Conference held in New York on Wednesday by the Turkey-U.S. Business Council (TAİK) on the last leg of his trip. More than 450 top executives and investors from Turkey and the U.S. attended the conference. Describing the alliance between Turkey and the U.S., which he noted is based on mutual interest, as strong, comprehensive and strategic in his speech, Erdoğan said, "Although we have differences of opinion from time to time, our partnership has so far overcome many challenges."

"And, in the recent period, we have gone through a process during which Turkey-U.S. relations have been seriously tested. Yet, thanks to the close dialogue and communication that I have established with my valuable friend President [Donald] Trump, we are overcoming this troublesome period," Erdoğan noted.

The president stressed that the two leaders are focusing on a positive agenda. "One of the most important elements of this positive agenda is to increase our economic and commercial relations to the level that reflects the real potential," he added.

The leaders agreed during their G20 meeting in Osaka, Japan in June to increase the trade volume between the two countries from $20 billion to $100 billion, a target that was revised up from $75 billion. Bilateral trade between the two countries stood at $20.6 billion in 2018, according to official data. Turkey's exports to the largest economy in the world were $8.3 billion, while its imports totaled $12.3 billion, according to data from the Turkish Statistical Institute (TurkStat). In the January to July period this year, the sale of Turkish goods and products to the U.S. was $4.6 billion and U.S. exports to Turkey were $6.6 billion.

Erdoğan said the current trade volume between the two countries is not sufficient. "Frankly, I believe that we can quickly achieve the goal of $100 billion through the mutual efforts of our governments, our support and through the strong will we, as the two presidents, display," he noted.

"I believe that the opening of the Free Trade Agreement negotiations will be beneficial in terms of achieving the targeted trade volume," said the president.

He stressed that such an agreement will primarily contribute to the development of trade and economic relations between the two countries.

"In addition, the agreement will allow Turkish and American companies to open up to the regions of the two countries and even develop joint projects in third countries," he added.

Erdoğan further said that he expects the U.S. to exempt his nation from any future tariffs due to the strategic partnership between the two countries.

"Firstly, we must iron out a kink at this point. Countries that seek to strengthen their trade do not put obstacles between themselves. We want the U.S. to review some of the measures it has implemented against our country and lift them. In particular, decisions like increasing the tariffs for our steel and aluminum exports and excluding us from the U.S. Generalized System of Preferences must be reversed," he noted.

There are over 1,800 American companies in Turkey carrying out their operations in a wide range of fields, including technology, food industry, health and IT.

Investments of these firms in Turkey exceeds $50 billion, Erdoğan said, adding that Turkey saw around $12 billion of foreign direct investment coming from the U.S. in the last 17 years. On the other hand, the president underscored that the investments of Turkish companies in the U.S. has approached $5 billion.

Also addressing the event, Treasury and Finance Minister Berat Albayrak said Turkey is a well-prepared country in the most challenging period for the global economic system, especially approaching global challenges.

"During the rebalancing phase, which we named so, our focus has been addressing major vulnerabilities of the economy and strengthening confidence," Albayrak noted.

He stressed that Turkey has achieved a remarkable rebalancing process in the economy since the announcement of the economic program in September 2018. 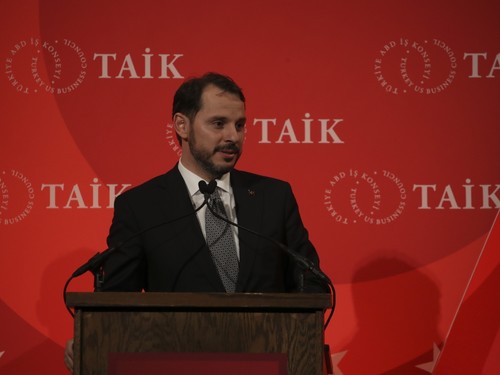 "The annual inflation rate has declined considerably, the current account has improved considerably and economic activity has begun to recover starting in the third quarter," he added.

Albayrak went on to say that Turkey kept implementing structural reforms to boost the recovery and bolster the economy in the long term.

Consumer prices in Turkey went up by 15.01% in August compared to the same month last year, according to TurkStat data. August figures were down from 16.65% in July, beating expectations.

On the other hand, according to the latest data, Turkey's current account balance posted a $1.2 billion surplus this July, improving from a $2.2 billion deficit in July 2018.

Also speaking at the meeting, U.S. Secretary of Commerce Wilbur Ross, accompanied by high-level government and business representatives, said they are focusing their efforts on increasing bilateral trade and working to eventually reach the $100 billion trade goal.

"In this context, our departments are carrying out intense work, and we are determining which sectors we are going to expand," Ross said. He noted the need for further coordination and cooperation between investors and companies from Turkey and the U.S. in the scope of the target, adding that he believes they would reach the target faster than expected.

Separately, in an interview with Fox News prior to his departure for Turkey, President Erdoğan said Turkey's purchase of Russian-made S-400 air-defense systems should not negatively affect the country's relations with the U.S.

"For us, the S-400 issue should definitely not damage Turkish-American ties, because these defense systems are Turkey's need," he said.

The Turkish president pointed at Bulgaria, Greece and Slovakia, all which are NATO allies that use Russian defense systems, arguing that if it is not a problem for them it should not be for Turkey either.

Ankara's purchase of the Russian missile systems caused tension with Washington as the latter even threatened to impose sanctions. U.S. President Trump said, however, that he was not considering punishing Turkey.

After protracted unsuccessful efforts to purchase Patriot missiles from the U.S., Turkey signed a deal with Russia in April 2017 to acquire the Russian air defense system. In July, the U.S. suspended Turkey's involvement in the F-35 fighter jets program, saying the latter's purchase of the Russian S-400 missile defense system could endanger the aircraft, a claim Turkey has consistently denied.

In response to U.S. concerns, Turkey has emphasized that the S-400 would not be integrated into the NATO systems and therefore had no chance to pose any threat to the alliance or its armaments. Turkey even proposed setting up a commission to clarify any technical issues. However, the U.S. has yet to respond to the proposal. Erdoğan insisted that Turkey's suspension from the F-35 fighter jet program by the Pentagon over the procurement of the S-400s was unfair.

"In the F-35 program, we are not customers, we are partners; we are one of the nine countries there. So far, we have paid $1.4 billion. Besides, some of the F-35 parts are produced in Turkey," the president said. "My people are asking, 'Where are the F-35s, weren't they supposed to come, why haven't they?'" he added.

Erdoğan reiterated that before purchasing the S-400s, Ankara tried to buy U.S. Patriot missile systems during the presidencies of both Barack Obama and Trump, but Washington refused.

In his previous remarks, Trump had said the dispute as a whole was "unfair" to Turkey as Washington repeatedly turned down Turkey's requests to purchase Patriot missile systems in the past.

He blamed the Barack Obama administration's reluctance to sell Patriot missiles to Turkey in 2013, saying Turkey was not treated fairly as a NATO member.