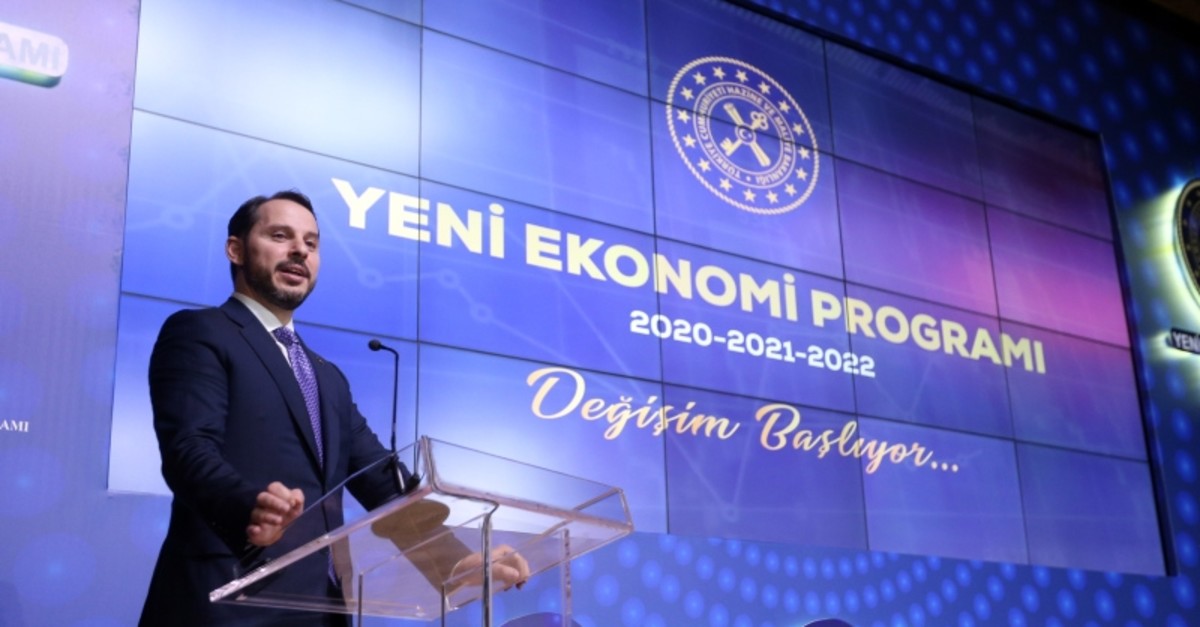 In a detailed presentation in Ankara Monday, Treasury and Finance Minister Berat Albayrak laid out Turkey's targets in the new economic road map regarding crucial macro indicators. The minister said that the country will soon enter a transformation period with revised significant steps

Following a successful rebalancing period over the last 12 months dominated by multiple global downward risks and high currency volatility as of August last year, Turkey went on to lower its inflation outlook and revise its economic growth forecast for the period ahead. In a presentation in the capital Ankara Monday, Treasury and Finance Minister Berat Albayrak laid out Turkey's targets regarding crucial macro indicators such as inflation, growth, employment and current account balance as part of the New Economic Program (NEP) covering the 2020-2022 period.

The new program will be maintained under the theme of "transformation begins," the finance minister announced. "Bringing inflation below 5% continues to be our primary goal," Albayrak said. He added that they trimmed the inflation forecast for this year to 12%, down from last year's predictions of 15.9% and to 8.5% for 2020, down from 9.8% in the previous forecast.

The 2021 forecast was unchanged at 6%, while the country's inflation target for 2022 is 4.9%, according to the program. It has been a year since the announcement of the first New Economic Program, which came after Turkish citizens voted to switch Turkey from a parliamentary system to an executive presidential system of governance in April 2017. The program had outlined broad guidelines for the economic rebalancing period. Consumer prices in Turkey went up by 15.01% in August compared to the same month last year, according to Turkish Statistical Institute (TurkStat) data. August's figure was down from 16.65% in July, beating expectations. Over the past decade, annual inflation saw its lowest level at 3.99% in March 2011, and it peaked at 25.24% last October.

TurkStat is set to announce the data for September on Wednesday. According to economists, inflation is expected to have fallen sharply in September, hitting single digits for the first time in more than two years thanks to base effect, according to analysts, before rising again. 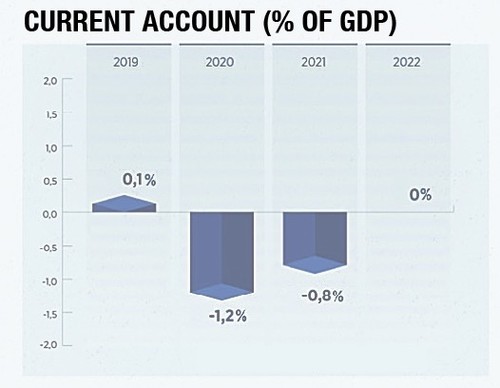 "In line with these targets, coordination between monetary and fiscal policies will continue. As it has so far, our government will continue to strongly support the central bank's fight against inflation," Albayrak said, adding that they will continue with structural transformation steps that will increase competition and depth in the goods and services markets.

In the face of rising inflation, the Central Bank of the Republic of Turkey (CBRT) increased the interest rates to 24% in September 2018, from 17.75% at the time.

Steps taken in the past year, the downward trend in inflationary pressures, the global appetite for lower interest rates at leading central banks and the ameliorating economic activity in Turkey all enabled the bank to ease its monetary policy. 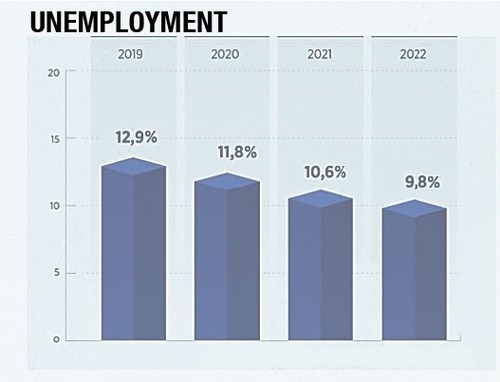 In its July meeting, the bank cut the benchmark interest rate, the one-week repo rate, massively by 425 basis points to 19.75%. In its latest monetary policy meeting on Sept. 12, the bank again cut the key rate by 3.25% to 16.50%, a decision that surpassed the median expectation for 275 basis points.

"This year, we are missing our growth target. Growth in 2019 will be 0.5%... We have done very comprehensive groundwork on growth," Albayrak said, compared to last year's forecast of 2.3%.

"We have achieved a soft landing," said the minister, adding that leading indicators pointed to a recovery in the current third quarter, following three straight quarters of year-on-year contraction after last year's fluctuations. 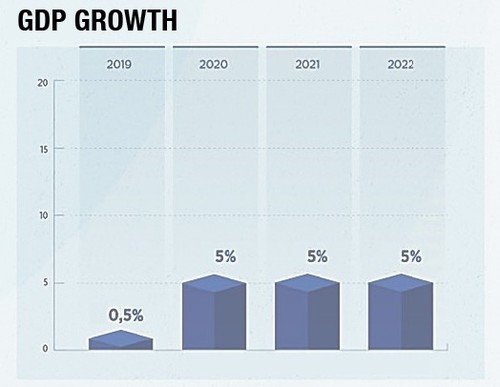 Stressing that the government will to get rid of middle income trap, he said Turkey aims for healthy and sustainable growth, rather than higher growth rates.

"The new program targets 5% annual growth for next three years each," Albayrak announced. The previous forecast for 2020 was 3.5%.

The gross domestic product (GDP) growth forecast for 2021 was unchanged at 5%, with 2022 also seen at that level, which would return Turkey's economy to its average growth rate in recent years.

Furthermore, the government plans to gradually lower the unemployment rate to single digits by 2022.

He emphasized that the growth will generate 1.066 million new jobs annually over the three-year period and reduce the unemployment rate gradually. 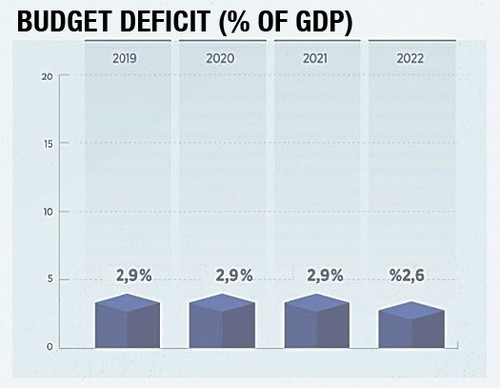 Developments in the construction sector and improving borrowing conditions will make a positive contribution to employment in the short term, he added.

On the fiscal discipline side, the ratio of the central government budget deficit to GDP is expected at 2.9% in 2019, up from 1.8% in the previous forecast.

Albayrak said the current account balance "will continue to be one of the main issues on the political agenda, indicating that this year will end with the current surplus."

He added that the government aims to reduce dollarization, open credit channels to support the private sector and deepen financial markets to ensure financial stability.

The minister said steps taken by the government would give banks a "clean slate" to begin lending again.

"We have taken innovative steps for banking-sector NPLs [non-performing loans]," Albayrak said, adding it was time for private banks to take a "proactive role" in extending credit.

"We will see the beginning of a clean slate for banks in the upcoming period. We think they will return to providing financing," the minister said.

He also announced that the government was initiating a tax reform that will pave the way for lower taxes for low-income households and higher taxes for high-income citizens.

Elaborating on the new economic program, Istanbul Chamber of Industry (İSO) Chairman Erdal Bahçıvan said that the most important part of the New Economic Program (NEP) is the fight against inflation and the single-digit target in the medium term.

"Together with the financial stability period that will be achieved in this field, we find it positive to return to a qualified and sustainable growth target," Bahçıvan added.

In his written statement, he pointed out that the other most important and positive goal for industrialists was "to once again decisively explain that they would support qualified investments aimed at reducing the current account deficit."

Bahçıvan further stressed that the targeted growth figures with these qualified investments would bring success in the fight against unemployment in the medium term.

"The most important is to show the existence of a strong and sustainable will behind these goals. If this is done, we, as the real sector, believe that our economy will achieve a permanent and sustainable balance with the support of qualified growth," he added.

In his assessment, Rıfat Hisarcıklıoğlu, Chairman of the Union of Chambers and Commodity Exchanges of Turkey (TOBB), said problems were correctly detected and identified, and realistic measures were put forward.

"A road map and a new economic model, which will prepare Turkey for 2023, have been prepared by taking into account economic sensitivities," he continued. "Targeting high growth again has given our private sector excitement and morale. We think that the planned steps will serve as a springboard in the economy, thus providing a transition to a strong and stable growth process. We are also pleased that the steps toward supporting t

he real sector, small and medium-sized enterprises [SMEs], producers and investments will continue."

On the other hand, the Confederation of Turkish Tradesmen and Craftsmen (TESK) Chair Bendevi Palandöken stated that they had complete support and confidence in the new program.

In a written statement, Palandöken said "taking less tax from those earning less and more from those earning more," one of the objectives of the NEP, was in compliance with the constitution, highlighting that the rate of indirect taxes should be reduced, and radical reforms should be made in income taxes to achieve this goal.

He also touched on the inflation targets under the NEP. "If the targeted rates can be met, the Turkish economy will emerge from the middle-income trap in 2022 and become a country that has been categorized as a developed country," he said.

Stressing that a significant portion of the targets set by the previous NEP was achieved, Istanbul Chamber of Commerce (İTO) President Şekib Avdagiç recalled that a successful balancing process was caught in critical topics such as the current account deficit and inflation.

Avdagiç noted that with the 2020-2022 NEP, a positive and reasonable framework was put forward for the medium term. "We have a strong growth target of 5% for 2020 and beyond," he said. "Thus, a period of strong growth in the economy will begin. Therefore, the main message must be sustainable growth."

Listing a new incentive package for unemployment, wholesale market law, and tax reform among the important topics in the program, Avdagiç said the declaration of willpower to carry Turkey to sustainable and healthy growth was put forward.

"As Minister Albayrak pointed out, the reopening of credit channels is critical for our companies," he continued. "Here, a process in which the measures taken to open credit channels starts to feel more powerful. Besides, we find it appropriate for NEP 2019 to touch upon priority areas such as employment, tax and financing channels that Turkey needs to develop. These will be the key to sustainable growth."