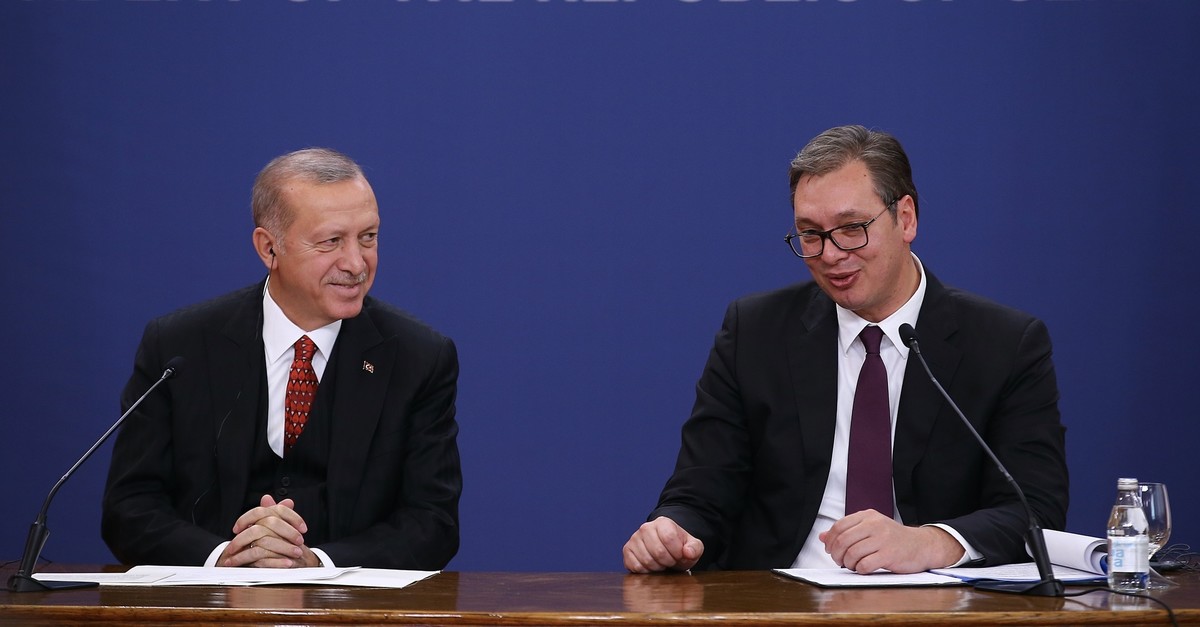 In the wake of 'fruitful' talks between President Recep Tayyip Erdoğan and his Serbian counterpart Aleksandar Vucic, Turkey and Serbia are now looking to deepen and further improve their growing bilateral relations

Turkey and Serbia are in an endeavor to further improve bilateral political, economic, commercial and cultural ties. Those were the words of President Recep Tayyip Erdoğan after he co-chaired the second meeting of the Serbia-Turkey High-Level Cooperation Council in Belgrade with his Serbian counterpart Aleksandar Vucic. Erdoğan arrived in Belgrade yesterday on a two-day official visit. At a news conference along with his Serbian counterpart after the meeting, Erdoğan said they reviewed all aspects of bilateral relations, possible steps for the further deepening of cooperation and exchanged views on regional and international issues.

Erdoğan underscored that their meeting was "very fruitful," also stressing that the cooperation between the two countries has reached an "excellent level."

"We had an opportunity to evaluate both what we have done over the last two years and set new goals in our bilateral relations," Erdoğan noted.

Before the news conference, the two countries signed nine new agreements and memorandums of understanding (MoUs) in the presence of Erdoğan and Vucic.

They include the Security Cooperation Agreement, MoU on Cooperation in the Areas of Family and Social Protection, MoU on Cooperation in the Field of Industry and Technology, MoU on the Application of Joint Patrol Police Services, Military Framework Agreement, MoU on Reconstruction of Kasapcic Bridge, Cooperation Protocol on Science and Technology, MoU between Turkey's Small and Medium Industry Development Organization (KOSGEB) and Development Agency of the Serbia (RAS) and MoU on Postal Services.

"The trade volume between our countries has increased to $1.2 billion… We have set a target of $2 billion for the short-term and $5 billion for long-term," Erdoğan underscored, urging Turkish firms to increase investments in Serbia.

Erdoğan particularly noted the importance of the visit since it coincides with the 140th anniversary of the diplomatic relations between Turkey and Serbia.

He announced Turkey will open a consulate general in Novi Pazar, Serbia.

"Today, we are taking another historic step within the context of our bilateral relations. Serbia responded positively to Turkey's demand of opening a consulate general in Novi Pazar," he said.

Previously, addressing the opening session of the meeting, Erdoğan expressed satisfaction over growing bilateral relations between the two countries.

"The growth of political, economic, commercial and cultural relations between Turkey and Serbia is really impressive. For the continuation of that, I attach great importance to the High-Level Strategic Council Meeting," he said. "I believe that these will go much further with the infrastructure works that all our ministers will carry out among themselves," he added.

"We agree that we can further improve our cooperation in tourism, culture and all other areas," Vucic said.

Following the meeting of the Serbia-Turkey High-Level Cooperation Council, the two presidents took part in the Turkey-Serbia Business Forum, which was attended by a large number of businessmen from both countries.

He emphasized that the two countries have "strong" desire to improve bilateral relations. "Serbia is a friendly country for us and a key country for the Balkans," he added. The president also called on Serbian entrepreneurs to invest in Turkey.

Prior to his visit to Belgrade, Erdoğan, in an interview with Serbian newspaper Politika, said Turkey, "as a part of the Balkans," wants to carry out activities that will contribute to the "welfare and stability" of the region, and to strengthen the relations and cooperation with the region in every field.

"Serbia has a central and strategic position in the Balkans. We have deep-rooted, historical and cultural ties with Serbia and we see it as a neighboring country, even though we have no common borders. Today, our relations are at their best level in history," Erdoğan said.

He stressed that relations between Turkey and Serbia are based on mutual understanding and respect.

Erdoğan added that he was pleased to see that bilateral cooperation has improved since his last visit to the country two years ago, that that the investments of Turkish businessmen have increased, but also that interest in Turkish culture and language is on the rise in Serbia and vice versa.

"To witness the results of all projects we have implemented together with my dear friend Vucic makes me particularly happy and shows that we are on the right track. I don't have any doubt that with this strong political will on both sides we will raise our cooperation to a much higher level," Erdoğan noted.

He also emphasized that Turkey attaches importance to maintaining stability in Serbia and that it supports Serbia's efforts toward economic development and the EU accession process.

"If prosperity and peace continue to move forward in Serbia, we believe it will have a positive impact on the entire region. Serbia plays an important role in maintaining regional peace and regional development. Every time I visit Belgrade, I have the opportunity to make sure of that," the president noted.

Erdoğan pointed out that Turkish investment in Serbia has risen from only $1 million in 2011 to $200 million in 2018 and provided employment for approximately 8,000 people in the country.

"Our companies have investments in Serbia in many sectors such as textile and garment, the automotive supplier industry, machinery, banking, and tourism. The number of Turkish companies operating in Serbia was around 130 in 2015, and it has already exceeded 800," said Erdoğan.

Among others, the inauguration of various projects completed by the Turkish Cooperation and Coordination Agency (TİKA) in Serbia and factories set up by Turkish firms, and several groundbreaking ceremonies were also planned to be held during the visit.

The meeting of the Turkey, Bosnia-Herzegovina, Serbia Trilateral Summit, which aims to further consolidate peace and stability in the Balkans, is also expected to be held today in Belgrade with the participation of Erdoğan, Vucic and the chairman and members of the Bosnia-Herzegovina Presidential Council.

The groundbreaking ceremony of the Sarajevo-Belgrade Highway will also take place as part of the summit with the participation of the leaders.

Erdoğan yesterday said they are considering the highway project as a friendship project of great importance for the region, adding that Turkey attaches "great importance to the realization of this project."

"We see it not only as a project that will strengthen the relations but also as a friendship project that will contribute to regional peace and unite the hearts. I do not doubt that we will take our cooperation with the strong political will to the next level, and we attach great importance to the preservation of peace and stability throughout the Balkans."

In December 2018, Turkey's Taşyapı signed a contract with the Serbian government for the design and construction of the first of two stretches of the highway. Turkey sees the highway's role as a guarantor for peace in the region. The project was brought up more than two years ago but hit a snag with 16 different routes proposed.

However, the dispute over the routes ended following a meeting in Turkey between Erdoğan, Vucic and former Bosniak member of the Presidency of Bosnia-Herzegovina Bakir Izetbegovic.