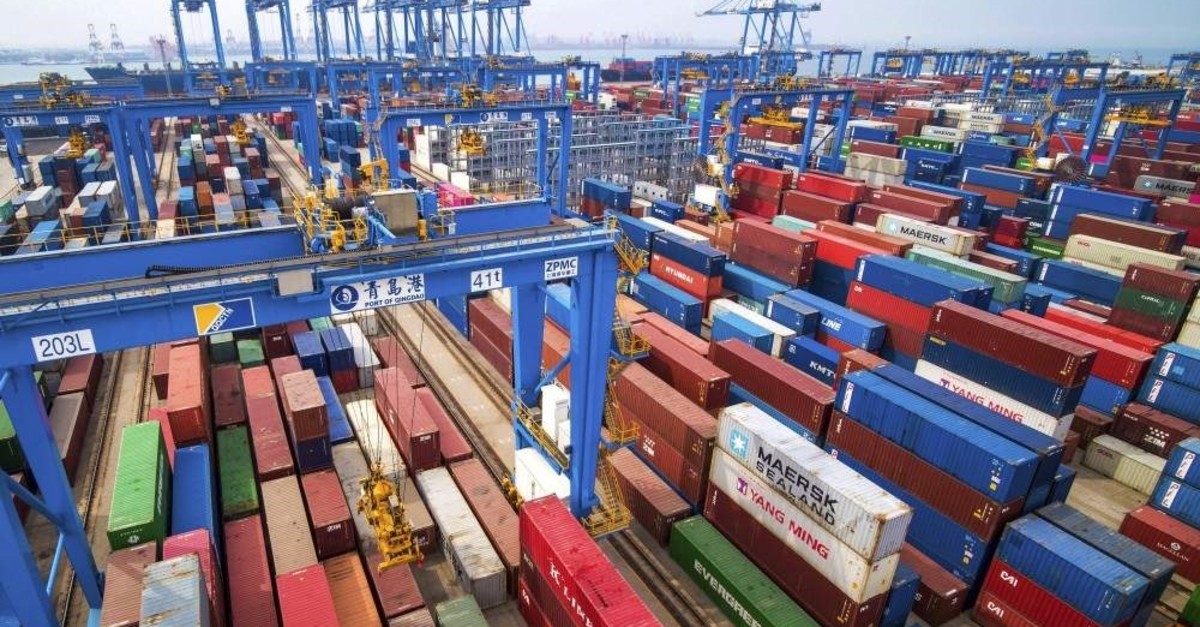 In this May 14, 2019, file photo, containers are piled up at a port in Qingdao in east China's Shandong province. (AP Photo)
by Oct 18, 2019 2:16 pm
China's third-quarter economic growth slowed more than expected and to its weakest pace in almost three decades as the bruising U.S. trade war hit factory production, boosting the case for Beijing to roll out fresh support.
Gross domestic product (GDP) rose just 6.0% year-on-year, marking a further loss of momentum for the economy from the second quarter's 6.2% growth.
China's trading partners and investors are closely watching the health of the world's second-largest economy as the trade war with the United States fuels fears about a global recession.
Asian stocks stumbled after the data, reversing gains made on the UK and European Union striking a long-awaited Brexit deal.
Downbeat Chinese data in recent months has highlighted weaker demand at home and abroad. Still, most analysts say the scope for aggressive stimulus is limited in an economy already saddled with piles of debt following previous easing cycles, which have sent housing prices sharply higher.
Nie Wen, a Shanghai-based economist at Hwabao Trust, pinned the worse-than-expected GDP growth mainly to weakness in export-related industries, especially the manufacturing sector.
"Given exports are unlikely to stage a comeback and a possible slowdown in the property sector, the downward pressure on China's economy is likely to continue, with fourth-quarter economic growth expected to slip to 5.9%," Nie said.
"Authorities will loosen policies, but in a more restrained way."
The third-quarter GDP growth was the slowest since the first quarter of 1992, the earliest quarterly data on record, and missed forecasts for 6.1% growth in a Reuters poll of analysts. It was also at the bottom end of the government's full-year target range of 6.0%-6.5%.
In a briefing after the GDP data release, Mao Shengyong, a spokesman for China's statistics bureau, announced Beijing's plans to bring forward some 2020 special local government bond issuance to this year, in a move to spur regional infrastructure investment.
Even recent signs of breakthrough in the protracted trade war between Beijing and Washington are unlikely to change the economic outlook any time soon.
U.S. President Donald Trump said last week the two sides had reached agreement on the first phase of a deal and suspended a tariff hike, but officials warn much work still needed to be done.
A slide in China's exports accelerated in September while imports contracted for a fifth straight month.
The drags on demand, both domestic and global, have hit several key parts of the economy with weakness seen in freight shipments, factory power generation, employment and entertainment spending. In September, factory gate prices fell at their fastest pace in three years.
Mao from the statistics bureau said there was ample room to change monetary policy, as rising consumer inflation has been mainly driven by volatile food prices.
The International Monetary Fund has warned the U.S.-China trade war will cut 2019 global growth to its slowest pace since the 2008-2009 financial crisis, but said output would rebound if their duelling tariffs were removed.
Beijing has relied on a combination of fiscal stimulus and monetary easing to weather the current slowdown, including trillions of yuan in tax cuts and local government bonds to fund infrastructure projects and efforts to spur bank lending.
But the economy has been slow to respond with business confidence shaky and local governments facing increasing strains as tax cuts hit revenues, weighing on investment.
PATCHES OF HOPE
In contrast to the disappointing headline GDP number, China's industrial output grew a better-than-expected 5.8% in September, faster than the 17-year-low posted in August.
The uptick was in line with signs of increased domestic orders, though overall demand remains at historically weak levels. Analysts had expected industrial output to grow 5.0% in September.
September's industrial production was also in line with recent business surveys that noted new domestic orders in food processing, textiles and electrical machinery, although growth in other products such as cement, crude steel and cars slowed further.
Hwabao Trust's Nie does not expect stronger manufacturing to last given slowing global demand, which would suggest a pick up in broader economic growth remains unlikely.
Fixed asset investment grew 5.4% from January-September, matching expectations, but slowing from the 5.5% in the first eight months.
Private sector fixed-asset investment, accounting for 60% of the country's total investment, grew 4.7% in January-September, down from 4.9% in January-August.
Retail sales rose 7.8% year-on-year last month, in line with expectations, and faster than 7.5% in August.
In another positive sign, China's property investment stayed buoyant in September, boosted by a rise in new construction activity.
But property transactions slowed during what is traditionally China's "Golden September" peak season for new home sales, hurt by authorities persistent crackdown on speculation, which showed few signs of easing.
"As infrastructure investment is unlikely to rebound strongly, preventing a big slide in property investment will be key for authorities when they try to stabilize next year's economic growth," said Zhang Yi, chief economist at Beijing-based Zhonghai Shengrong Capital Management.