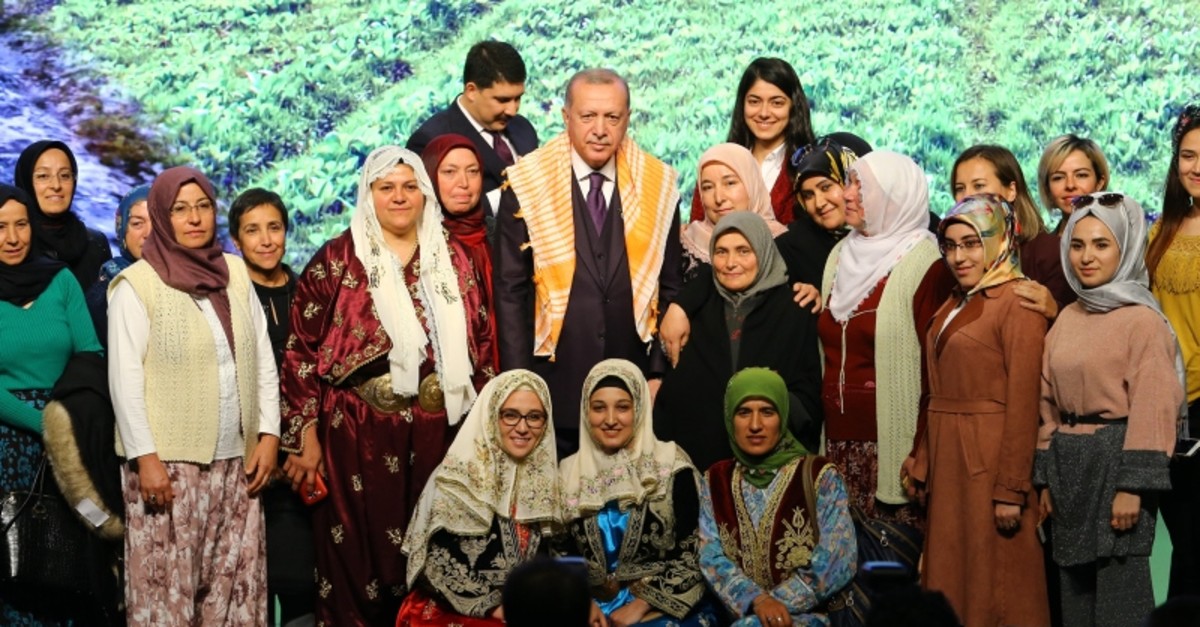 The government will be backing every effort and taking firm steps to help boost agricultural and livestock production, according to President Erdoğan, who also said ensuring food safety has become a matter of national security

The Turkish president yesterday said food safety has become a matter of national security for the country, stressing the danger of foreign dependency in basic agricultural products, with emphasis on the strong support the country will be providing for the agricultural and livestock industries.
“Ensuring the food safety of our people has become a matter of national security for Turkey as it has for every other country,” President Recep Tayyip Erdoğan said in his address at the 3rd Turkey Agriculture and Forestry Council in the capital Ankara, underscoring that developed countries already invest extraordinary effort to ensure their food safety and future.
“Foreign dependency in basic agricultural products is just as dangerous as foreign dependency in the defense industry. It is a risk that can by no means be taken for a country like us, which is located at the intersection of continents and struggles of interest,” Erdoğan noted.
The president stressed: “We have built our agriculture policies upon these very facts. We have never and will never allow any step that would pose a security risk to our country.”
Erdoğan provided assurances that he will be closely following the implementation of all decisions that would further develop Turkish agriculture and strengthen Turkish farmers' position.
He announced that public lender Ziraat Bank will be maintaining a much broader solidarity with Turkish farmers.
“We have provided agricultural support of TL 137.7 billion so far... We are seventh in the world in agricultural production and first in Europe. We are the world leader in hazelnut, cherry, apricot and quince production,” the president noted.
Turkey exports 690,000 agricultural products to 195 countries worldwide. It managed to increase its agricultural production exports to $17.7 billion in 2018, according to the Agriculture and Forestry Ministry.
“Our foreign trade surplus in agriculture increased to $4.8 billion. We increased the number of organic products from 150 to 213. We earned $361 million by exporting these products. Our seed production amount increased to 1 million tons,” Erdoğan said.
Turkey is the top producer and exporter of hazelnuts, cherries, figs and apricots in the world. An average of 500,000 to 750,000 tons of hazelnuts is produced annually. Between September 2018 and May 2019, Turkey exported $1.4 billion worth of hazelnuts and hazelnut products. Having produced 306,000 tons of figs last year, Turkey generated $286 million in foreign currency inflow from the export of this product as both dried and fresh varieties.
Turkey, which achieved 627,000 tons in cherry production and $162 million in exports, stood at around 750,000 to 985,000 tons in apricot production. The country also generated $294 million in revenue from apricot exports.
Meanwhile, Turkey ranks second in poppy seed, melon and watermelon production, third in lentil, pistachio, chestnut and cucumber production, and fourth in walnut, olive, apple, tomato, eggplant, spinach and pepper production.
MEAT IMPORT SENSITIVITY TO CONTINUE
In recent years, Turkey has been taking steps to cease being a meat importer.
“In the last one and a half years, we have not imported meat unless it was compulsory. We have not been accepting applications for livestock imports since the beginning of this month. We will continue this sensitivity in 2020,” he said, adding that they will increase the presence of small cattle and will be providing financial support in this direction.
On the other hand, he underscored that a system to guarantee the production of poultry was established. “Thus, we aim to provide production of 220,000 units of domestic meat and egg-laying chicken annually. Using these breeders, 30 million chickens can be produced,” Erdoğan said.
While taking all of these steps, the president emphasized that they haven’t neglected forestry.
Turkey recently carried out a countrywide campaign, and 11 million saplings were planted within three hours on Nov. 11, at 11:11 a.m. The country declared Nov. 11 National Forestation Day.
“This will continue like this. We planted 11 million under the 'Breath for the Future' campaign in our 81 provinces in 2023 separate locations... We have declared Nov. 11 National Forestation Day. We will leave a greener and more livable country for future generations,” he noted.
He further remarked that they will increase the number of protected areas from 599 to 605 and increase their forest area to 22.9 million hectares by the end of 2020.
“We aim to increase the number of dams from 841 to 856 and to increase storage volume to 178 billion cubic meters,” he added.