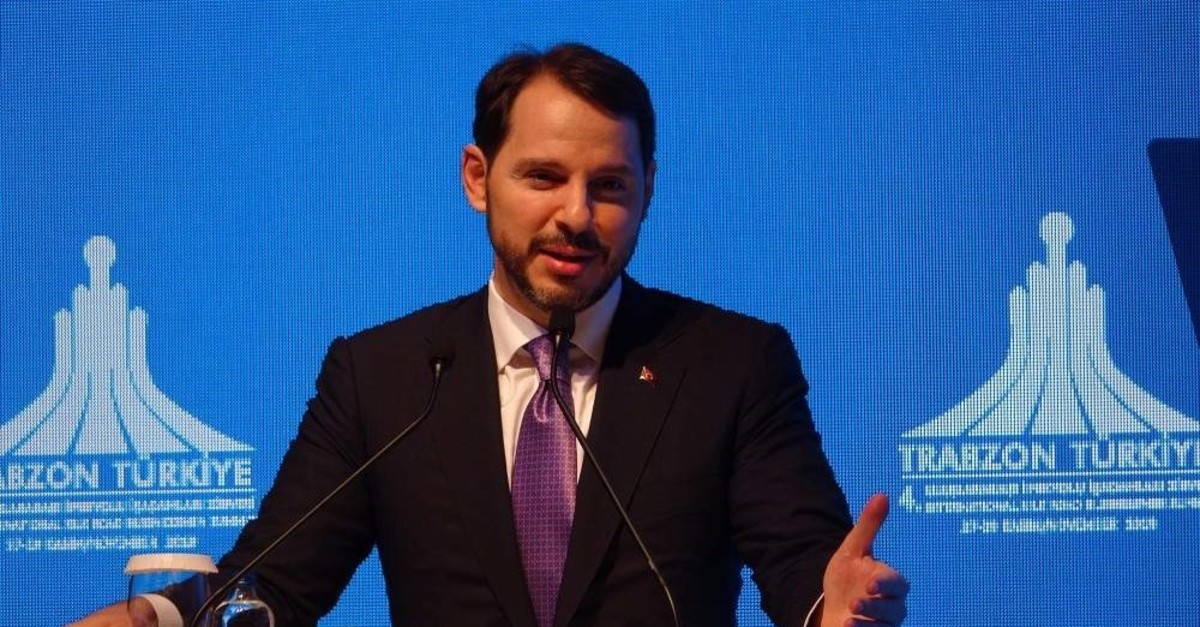 The soothing volatility in financial markets and improving macroeconomic indicators have nurtured investment and consumer confidence in the Turkish economy in the second half of the year, which is expected to be reflected in the growth data


The recent stability in the financial markets, which has been evident in the decreasing volatility and the rising value of Turkish assets, has recently bolstered investment and consumer confidence in the Turkish economy. The amelioration in the financial outlook, Treasury and Finance Minister Berat Albayrak remarked Thursday, has expedited long-delayed investment and consumption decisions.
In an address to businesspeople in the Black Sea province of Trabzon, Albayrak drew attention to the strong indicators of improvement in the Turkish economy after one and half years of turmoil and three quarters of contraction.
“The third quarter growth data, which will be announced soon, will reflect the economic normalization and improvement. We expect that the momentum we have started to see in the second half of the year will be stronger in the last quarter,” the minister said.
In an evaluation, the treasury and finance minister stressed that the appropriate measures in times of turmoil have decreased volatility and normalized financial markets, and the Turkish economy will register a higher growth rate than the estimates of the global monitoring agencies.
Citing upward revisions by international institutions, Albayrak referred to the positive growth estimates by the Organization of Economic Co-operation and Development (OECD) in its latest report released in September. The OECD revised the 2019 forecast to 0.3% growth from a 2.9% contraction. For next year, the organization expects a 3% growth in the Turkish economy. “The OECD underscored that the financial conditions in Turkey continue to improve with lower interest rates and soaring stock prices after the shocks in August 2018,” he said and continued, “Despite their usual negative stances, international credit rating agencies also revised up their estimates for the Turkish economic growth.”
The U.S.-based credit rating agency Moody's recently revised Turkey's economic growth forecast to 0.2% for 2019 from a 2% contraction and 3% for 2020 from 2%, citing the country's strong economic recovery. The International Monetary Fund (IMF) report said the Turkish economy may see a growth of 0.25%, reversing previous forecasts of a 2.5% contraction.
The U.S.-based investment bank JPMorgan also made a revision in its estimates for the Turkish economic growth. The bank said Tuesday that the GDP will grow 0.3% this year and 2.3% next year. JPMorgan had previously said the Turkish economy would expand by 0.2% this year.
According to the New Economic Program (NEP) unveiled in September, the government expects 0.5% growth this year and targets a 5% growth rate in the next three years.
Revival in economic activity
In a context under the cloud of global uncertainties, Turkey will continue to support regional peace, stability and welfare.
“Turkey has left a difficult period behind, shrugging off the repercussions of the market turbulence that we had experienced last year in August and September. Our new economic program, which we announced in September for the second time, will function as a road map for healthier and more sustainable growth in the middle and long term,” Albayrak said.
The minister also pointed out the amelioration in the macroeconomic indicators, including economic confidence, inflation and current account balance.
Turkey's economic confidence index rose to 91.3 in November on a monthly basis, according to official data released yesterday. The figure rose 1.7% from 89.8 in October, the Turkish Statistical Authority (TurkStat) said.
Improvement in consumer, real sector and services sector confidence indices led to the rise in economic confidence, it added. "Consumer, real sector and services confidence indices increased to 59.9, 105.9 and 91.3, respectively, in November," TurkStat noted. The economic confidence index was 75.2 points in October 2018.
The TurkStat report also revealed that the calendar-adjusted industrial production soared 3.4% in September year-on-year. The manufacturing industry used 77.2% of its capacity in November, its highest level in the last 15 months, the Central Bank of the Republic of Turkey (CBRT) reported on Monday.
Turkey's five-year credit-default swaps (CDS) stood around 317.9 points as of yesterday, according to investing.com. The five-year CDS reached a maximum value of 566.38 points on Sept. 4, 2018, and the lowest yield of 152.28 since Jan. 5, 2018.
At his last meeting on Oct. 24, the central bank also lowered the benchmark interest rate to 14%. The Monetary Policy Committee's (MPC) cut was the third straight reduction since July when the rate was 24% to slow double-digit inflation and ease a tumble in the lira following high volatility in the exchange rates in 2018.
Annual inflation in Turkey has fallen to 8.55% in October 2019 from 25.24% in October 2018. In this period, the inflation dropped to single digits for the first time since July 2017.
Moreover, Turkey’s annualized current account balance renewed its surplus record in September. The 12-month current account balance posted a surplus of $5.9 billion in said month.
The current account balance saw a $2.48 billion surplus in September, improving by $599 million since September 2018.
With the measures taken over the last year, the improving tourism sector and decreasing imports, the annual current account deficit has gradually declined from about $58 billion since the second half of last year.
The improvement was mainly driven by a reduction in the import-export gap to $867 million, down $48 million from a year earlier, and a rise in the net income from services to $4.3 billion, up $694 million.
The country's New Economic Program, unveiled in September, forecasts a current account surplus-to-GDP ratio of 0.1% for 2019, as well as a current account deficit of 1.2% next year and 0.8% in 2021 before reaching 0% in 2022.
Last Update: Dec 20, 2019 2:00 am
RELATED TOPICS