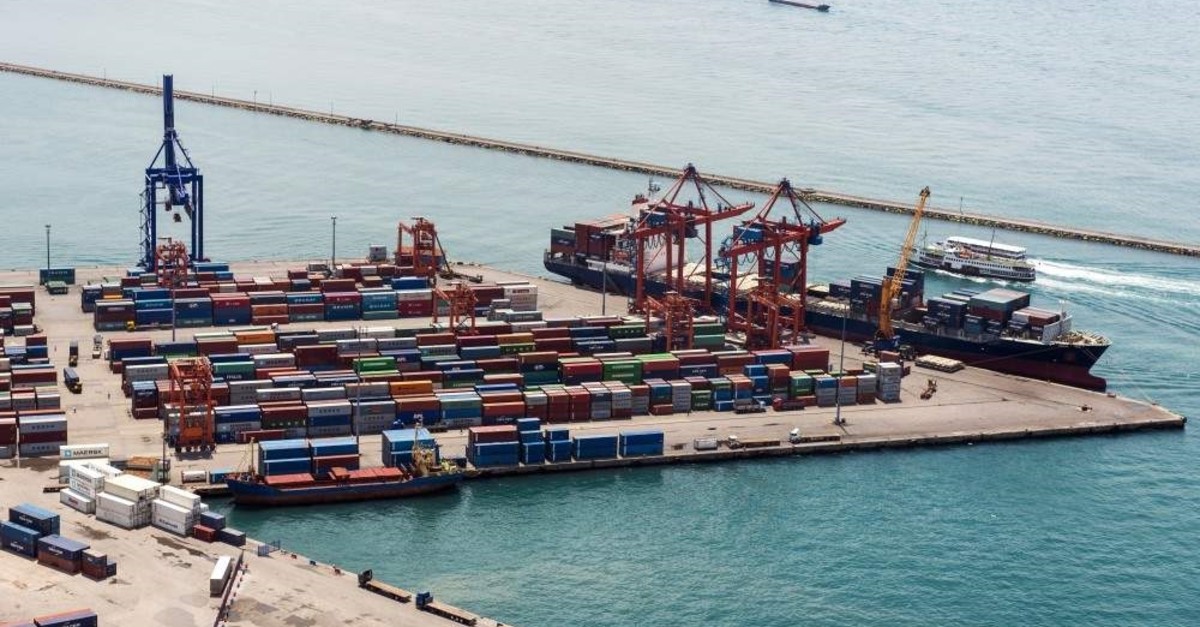 Aerial view of a tanker ship at the Haydarpa?a Port, Istanbul. (iStock Photo)
by Daily Sabah with Agencies Dec 02, 2019 7:43 pm

Turkey's exports have experienced losses due to growing protectionism; however, Trade Minister Ruhsar Pekcan says Turkey is in a good position considering the current conditions in global trade

Turkey’s foreign trade gap has shrunk significantly, as its exports increased and imports declined over the course of 11 months of this year.

Indicating the gap between exports and imports, the foreign trade deficit fell 51.84% to $25.16 billion, down from around $52.25 billion in the January-November period of 2018, Trade Minister Ruhsar Pekcan announced yesterday.

“With an increase of 1.77% compared to the 11 months of last year, our exports reached $165.067 billion and maintained a strong and positive course,” Pekcan said in her speech at a meeting in Istanbul to announce export figures. "Twelve-month exports reached $179.86 billion."
Imports, on the other hand, went down by 11.29% year-on-year over the January-November period totaling $190.23 billion, Pekcan said.

“With a decline of $27.085 billion in the first eleven months of this year, our foreign trade deficit has had a positive effect on Turkey’s current account balance and its external financing need,” Pekcan explained.

Commenting on growth figures also released Monday, she said with the third quarter figures Turkey was back in positive territory. Pekcan added that she expects to see even better figures by the end of the year. Turkey's economy expanded 0.9% year-on-year in the third quarter of this year, the country's statistical authority reported Monday.

Also addressing the meeting, İsmail Gülle, head of the Turkish Exporters Assembly (TİM), revealed that the automotive sector took the lead with $2.7 billion in exports, followed by the chemicals sector with $1.8 billion.

Gülle added that the ready-made clothing and apparel sector reached $1.5 billion, putting it in third place.

Looking over the past 11 months, Gülle said Turkey’s defense and aviation product exports to the United Arab Emirates and Qatar more than doubled.

Also rising by more than 100% over the period were chemical product exports to Lebanon, Nigeria, Singapore, the Netherlands, and Slovenia, steel products to Saudi Arabia and Ukraine, automotive exports to Azerbaijan, and hazelnut exports to Italy, he said.

"Germany, Iraq, and the United Kingdom were the top 3 countries we exported to," he noted.

He said the top three exporting provinces in the country were Istanbul, with $6.1 billion, Bursa with $1.38 billion and Kocaeli with $1.3 billion.

Pointing to the total export change in the World Trade Organization’s (WTO) 9-month figures, Pekcan emphasized that of the countries whose data was revealed, 50 saw a decline in exports over the same nine-month period.

“The average drop rate of these 50 countries came to 2.6%. Our nine-month export increase comes to 2.56%. When we look at the country list, we rank seventh on the basis of the increase rate in exports. However, when we look in terms of dollars as an absolute value, we are in 5th place in terms of export increase,” the minister noted.

“Considering the current conditions of global trade, we can say we are in a very good position,” Pekcan stressed.

Noting the conflict in global trade, Pekcan said, according to the International Monetary Fund (IMF), the U.S.-China trade war is projected to cost the world economy some $700 billion by 2020.

She stressed that international institutions are continuously revising their forecasts for the global economic outlook downwards, noting that the global economic growth was lowered from 3.9% to 3% for this year, while a 3.4% growth is expected in 2020.

The WTO, which had first announced its expectation for the global trade growth as 4%, has lowered this figure all the way down to just 1.2%, the minister said.

The loss Turkey experienced in its exports due to the growing protectionism stood at $893 million in 2017, Pekcan explained.

She went on to say that “the volume of our exports effected by the protectionist measures increased to $7.2 billion in 2018 and to $11 billion in 2019. When we look at some possible measures, this is likely to go up to as much as $14.4 billion.”

She also underscored their fight against unfair practices, explaining that the trade policy measures applied toward export goods originating from Turkey was 48 units in 2018 and has reached 53 to date.

In the meantime, the highest adjudicating body for resolving global trade disputes at the WTO’s dispute settlement system could become dysfunctional on Dec. 11, as the U.S. continues to block appointments to the body, which means it will soon have too few members to function at all.

Washington’s blocking action has reduced a pool of seven adjudicators to just three, the minimum required to sit on a case. When two of those three reach the end of their terms on Dec. 10, the Appellate Body will cease to function.

Trade Minister Pekcan also stressed that the functionality of the WTO is under discussion.

“It is highly probable that the work of the WTO appeal body will grow dysfunctional as of Dec. 11,” she said.
“If the new member of the appeal body cannot be appointed with the U.S. blockade, it will become dysfunctional,” Pekcan added.“Turkey has always sided with multilateral, free and fair trade. We will continue our work from now on as well, but we have to take into consideration every possibility.”

In this scope, she continued, they are approaching bilateral trade agreements sensitively, adding that with the update of the Customs Union, new business opportunities would emerge for both sides.

Turkey is the only non-EU country that has had a customs union agreement, which was inked with the European Union in 1966. In its Dec. 21, 2016 assessment, the EU Commission proposed a revision of the current deal, which only covers a limited range of industrial products and excludes agriculture, public procurement, and services.
The modernization of the customs union between Turkey and the EU has been on both parties' agendas for more than two years now. Although they have expressed the will to take steps to update the agreement, as it will be advantageous for both sides, no concrete development has so far been taken.

Pekcan also noted that they are conducting studies related to the process that will be experienced in trade with the U.K. after Brexit, recalling that the U.K. is the second-largest export destination for Turkey.

Previously, she had warned that Turkey would be the most affected after the EU in the event of a possible no-deal Brexit, saying Turkey's loss on trade with the U.K. could come to around $3 billion.

Stressing that automotive, textile, apparel, white goods, and electronics sectors would suffer the most from this situation, Pekcan had noted that the loss in the automotive industry might be $2 billion, textiles $1.3 billion, and $500 million for white goods and electronics.