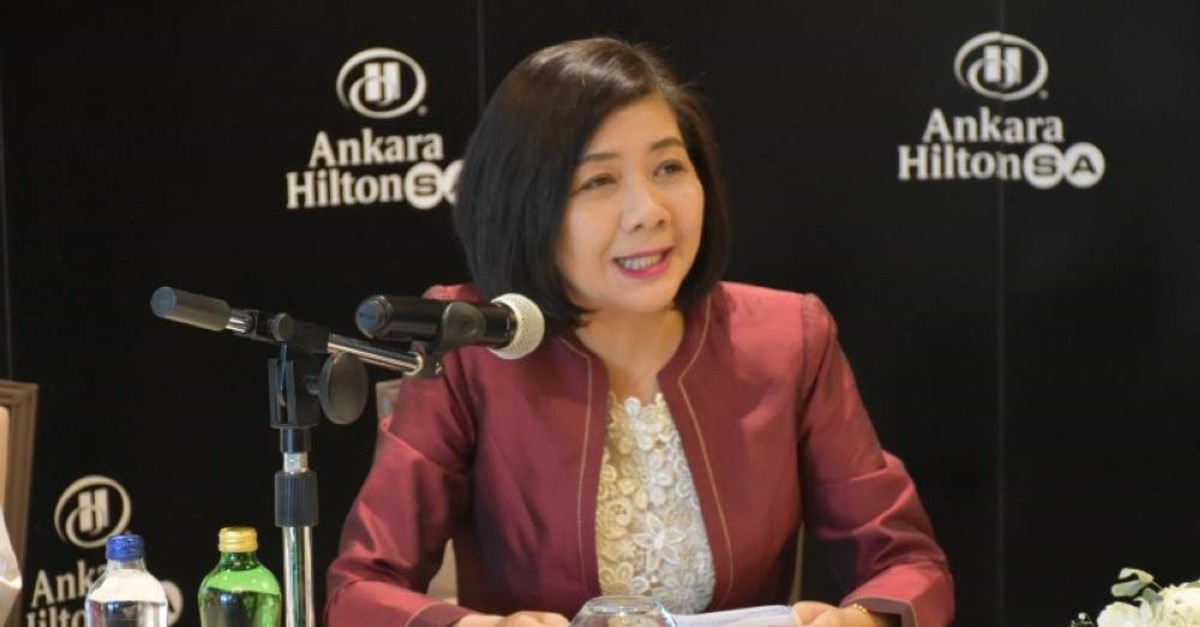 Ambassador to Turkey of the Kingdom of Thailand Phantipha Iamsudha Ekahorit speaking at the Thailand food festival press conference in Ankara, Dec. 3, 2019. (AA Photo)
by Dec 06, 2019 6:33 pm
Trade relations between Turkey and Thailand are expected to significantly increase up to 40% through a number of new initiatives, including a free trade agreement (FTA) currently in the negotiations phase, Thailand's Ambassador to Turkey Phantipha Iamsudha Ekahorit told Daily Sabah Wednesday.
“I think that one important upcoming negotiation is the FTA. We launched negotiations two years ago. Right now, the sixth round of the negotiations is taking place in Bangkok, Thailand right now. But we hope by next year, we will be able to conclude the talks and sign the free trade agreement, which will cover goods,” Ekahorit stated, adding that in the future it could also see an expansion into investment and services.
The ambassador further explained that delegations and economic media representatives from Turkey were being invited to Thailand to explore possible opportunities for investments and economic cooperation while also meeting their counterparts in Thailand.
“We also held a seminar in Istanbul to inform the Turkish public about the potential for economic cooperation between the two countries. If possible, before the FTA negotiation is concluded, next year we also hope to hold a seminar in Thailand to inform the Thai public about the Turkish business environment and potential of economic cooperation between the two countries,” Ekahorit said and indicated that the two countries will have a greater knowledge of the private sector.
Turkey and Thailand have been conducting negotiations for an FTA to increase economic cooperation since 2017. The FTA is expected to boost the existing trade volume. “We believe that if we can finalize the FTA, it will be able to increase our trade by 40%,” Ekahorit said.
In 2018, bilateral trade stood at $1.6 billion. While Thailand's exports to Turkey were nearly $1.4 billion, Turkey's exports to Thailand remained at $278 million, according to data from the Turkish Statistical Institute (TurkStat). In the period between January to October this year, Turkey's imports from the Asian country totaled $899 million. Exports, meanwhile, valued $214 million. The two countries aim to increase their trade volume to $2 billion by 2022.
Last month, 32 Turkish defense firms, joined by the Defense and Aerospace Industry Exporters Association, attended the Thailand Defense and Security Exhibition that took place in Bangkok Nov. 18-21. A number of domestically produced defense products and platforms, including the T129 Tactical Reconnaissance and Attack Helicopter (ATAK), aerial vehicles, marine systems, ammunition, low-caliber guns and flow forming machines, were displayed during the fair.
Last Update: Dec 20, 2019 2:12 am
RELATED TOPICS