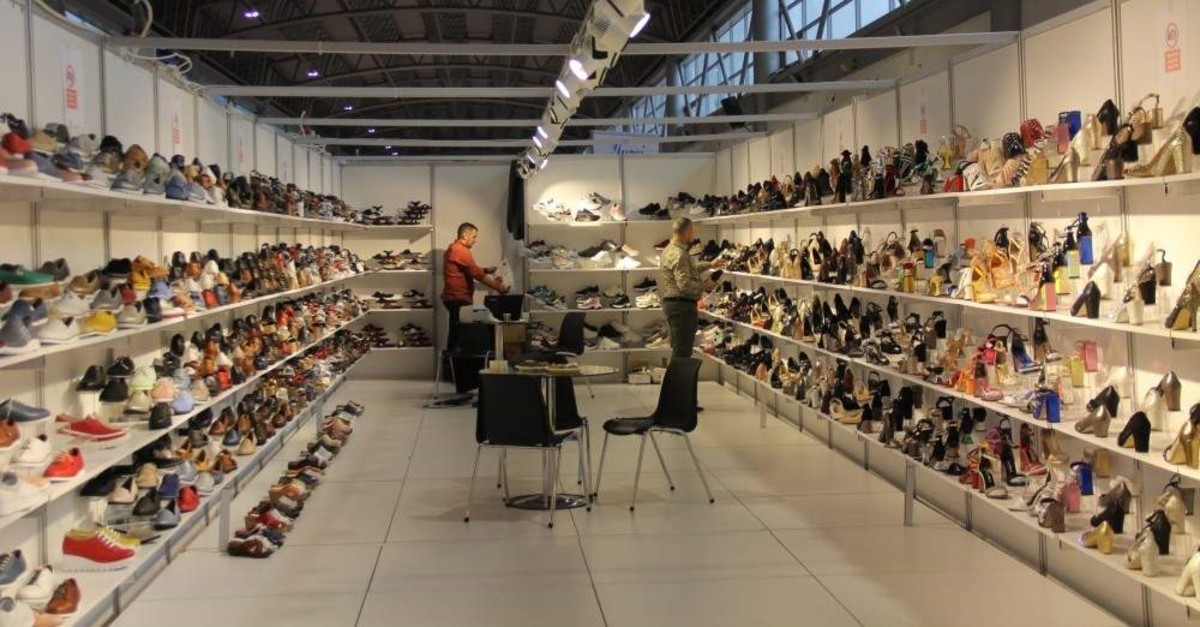 In the period of January to November, Turkey reached $1.6 billion in exports of footwear and leather products. (AA Photo)
by Daily Sabah with AA Dec 08, 2019 3:01 pm
In the first 11 months of the year, Turkey reached $1.6 billion in exports of leather goods, selling footwear to 186 countries and other leather products to 202 destinations.
“If we manage to revive the footwear sector a little more, we can surpass the export target of $2 billion in 2020,” Istanbul Leather and Leather Products Exporters Association (İDMİB) Chairman Mustafa Şenocak remarked.
In a statement to Anadolu Agency (AA) on Saturday, Şenocak pointed to a slight increase in export figures compared to last year despite the protectionist measures in global trade and the shrinking trade volume.
Highlighting the increase in saddlery and footwear exports and the decrease in semi-finished products, leather and fur apparel, Şenocak said the decrease in leather apparel was due to the decline in sales to Russia.
The İDMİB chairman stressed that there was no decrease in exports to other countries, but that leather apparel sales increased in European Union countries, the United States and the Far East.
Şenocak said that the sector exported footwear to 186 countries and leather and leather products to 202 countries, touching on major projects on new markets in this field. He further recalled that they just returned from South Korea with a delegation of 20 people and aimed to triple exports to this market.
“There is a serious import of leather and leather products in Korea. The share we receive here is only 1%, we do not find it sufficient,” he continued. “We have a free trade agreement, plus no visa restrictions. We put them all in a basket and accelerate our work there. We will open a trade center in Korea.
In the first 11 months of 2019, we reached $1.6 billion in exports. If we revive the footwear sector a little more, we can surpass the export target of $2 billion in 2020.”
He also explained that footwear makes up $875 million of exports, followed by semi-finished and finished products with $240 million, leather and fur apparel with $223 million and leather goods with $212 million.
Şenocak said that exporters reached $170 million in sales to Russia, $115 million to Germany, $113 million to Italy, $78 million to Iraq and $66 million to Spain this year, while exports to South Korea amounted to $60 million.
Noting that they started to sell more value-added products and raise the number of target countries, he said these developments showed how safe the steps were taken for the future and suggested that the shoe industry should be opened to Africa.
“We are working on which country imports what and how much. We have the potential to sell shoes to South Africa and Chile. We will open up to these markets as well,” he said. “China, on the other hand, is the biggest market for the industry. We are setting historic records in footwear exports. If we can open the footwear industry to Africa and get enough shares from the U.S., the footwear group will be our locomotive.”
Last Update: Dec 20, 2019 2:13 am
RELATED TOPICS