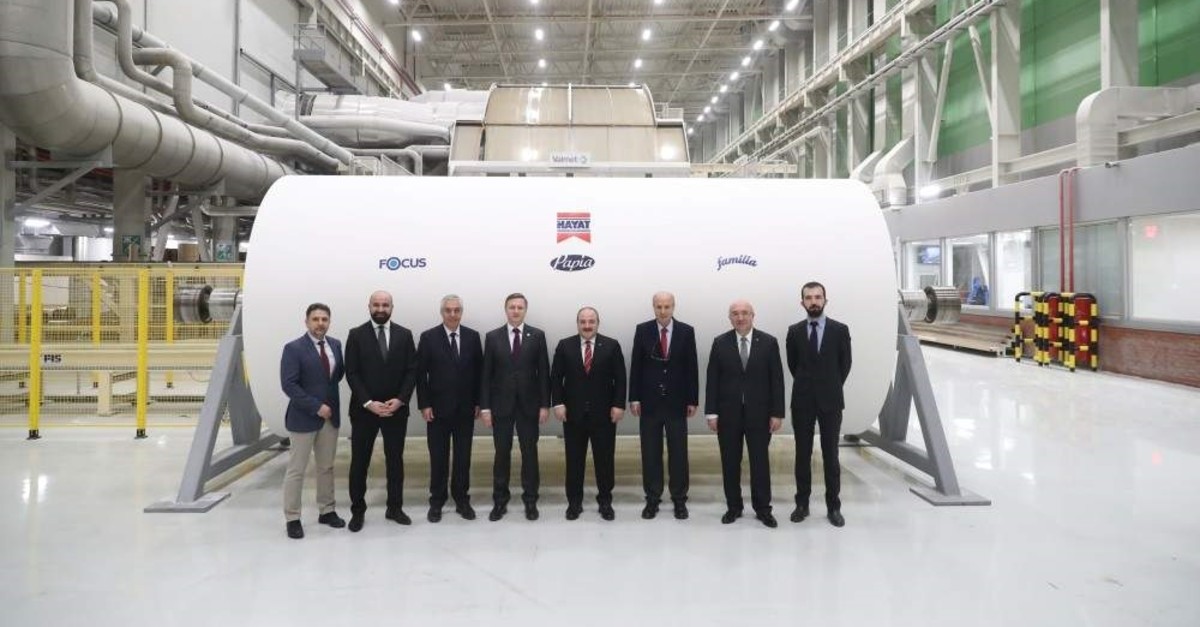 Industry and Technology Minister Mustafa Varank (fourth from right) and his delegation visit Hayat Kimya's new facility in the Alabuga special economic zone of Tatarstan, Dec. 6, 2019. (AA Photo)
by Daily Sabah Dec 08, 2019 3:21 pm
Having invested $225 million in Russia in the last five years, Turkish producer Hayat Kimya launched its second cleaning paper production facility in the Alabuga special economic zone of Tatarstan. With the new facility investment, the chemical company increased its capacity from 70,000 tons to 140,000 tons annually, becoming the largest cellulose cleaning paper producer in Russia.
The second paper facility founded by Hayat Kimya, a chemical company aiming to become a global brand in the fast-moving consumer goods (FMCG) sector, in Tatarstan, Russia, was visited by Industry and Technology Minister Mustafa Varank last week.
During the visit, Hayat Kimya Senior Vice President Ali Zeybek, who is in charge of subsidiaries, and Hayat Kimya General Manager in Russia Çetin Murat guided the minister and his delegation around the facility and provided information on the production operations. The company currently has 18 production facilities in 10 countries.
Murat said that they rank second in the branded products market of Russia with Papia, Familia and Focus brands, adding, “Our new machinery investment and our production facility have become an important milestone in our journey of success on behalf of both Russia and Hayat Kimya.”
Emphasizing that the company will continue to invest to become the largest paper producer in Russia, Murat noted, “As Hayat Kimya, we will continue to make a difference with our high-quality products and investments in the regions we are present.”
Indicating that they managed to make their brands one of the top two in just five years, Murat said, “Russian consumers have rewarded our quality. Both Familia and Papia brand products were awarded the quality award. Today, we reach a total of 13 million homes from 83,000 distribution points in Russia. The paper towels and toilet paper we produce in Russia have a market share of 22% and 17%, respectively.”
Built on an area of 73,000 square meters, the facility has a world-class production of toilet paper, paper towels, paper napkins and paper handkerchiefs. The products are distributed to 83,000 distribution points in the Russian Federation and exported to 14 countries including Belarus, Azerbaijan, Kazakhstan, Estonia and Latvia.
Last Update: Dec 20, 2019 2:13 am
RELATED TOPICS