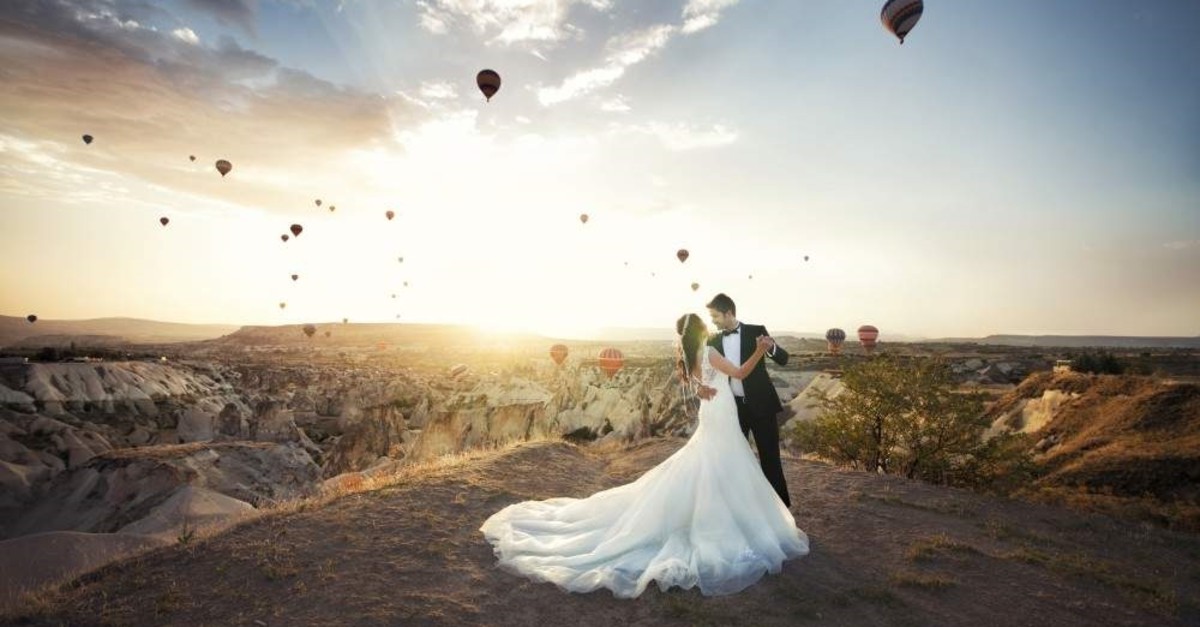 In recent years, weddings in Turkey have been on the rise. Young people who do not want to pursue old traditions are now making their wedding plans through the influence of posts on social media. This trend has doubled wedding day expenses throughout the past three years.

Couples' sharing their weddings on social media influence other users' choices of wedding dresses, wedding venues and even hairstylists. Up until three years ago, the average cost for a wedding was TL 50,000, while the average is at least TL 100,000 nowadays. Wedding venues are specially decorated for social media sharing, which is one of the biggest reasons for the choice.

According to dugun.com, which provides a market place service for wedding planning in 32 cities across Turkey, 600,000 couples get married annually, and 500,000 of them hold wedding ceremonies. Moreover, henna nights which do not attract the attention of new generations as much, have recently become quite popular in their flamboyant form. The number of organizational companies in this area has also gradually increased.

Emek Kırbıyık, CEO of dugun.com, a market place platform providing service for couples preparing for wedding ceremonies, told the Dünya newspaper Tuesday that one of the biggest factors in this shift was the radiant henna night scene at the bathhouse in Aşk-ı Memnu (Forbidden Love), which broke rating records in Turkey. The flashy wedding trend, which spread through social media later, has also had a booming impact on the industry, with officials describing it as the "Instagram effect."

Indicating that some TL 100,000-150,000 are spent on wedding ceremonies in Turkey, Kırbıyık said that half of this is spent on the wedding day and the other half is on household goods. Pointing out that the volume of the sector is $166 billion in the U.S. and around $10 billion in Turkey, Kırbıyık noted that 35% of white goods sold in Turkey are sold to couples about to get married.

Stating that the number of wedding dresses worn on wedding days has risen to three from one due to the influence of Instagram, Kırbıyık added, "Wedding ceremonies have regained importance in Turkey. Couples receive loans to hold wedding ceremonies. They give up white goods and hold the wedding ceremony in luxurious avenues."

The website dugun.com brings together wedding companies with couples looking to get married. Kırbıyık said that the website has undertaken 400,000 wedding ceremonies out of the 600,000 in Turkey, noting that wedding venues have increased its business volume by 50% thanks to the market place.

Indicating that there is potential in this area around the world, Kırbıyık touched on its initiatives in the Middle East.

"The more we go north, the less important the wedding is. However, it important to Turkish culture and even more important throughout the Middle East. We have opened up to countries like Saudi Arabia, Lebanon, Jordan, Morocco and Tunisia. We broadcast in their own language. A total of 20% of the turnover comes from abroad. For now, we are working with local companies of the countries. In the future, we are trying to be Turkish wedding companies' gateway to the world," he expressed.

Silverline CEO Mustafa Laçin stated that the economic segment has come to the fore in Turkey and that consumers prefer economical products. Elif Zeynep, the owner of a wedding dress company in the historical district of Fatih, said that young people in Turkey have recently been pursuing luxury wedding dresses. Brides are attaching more importance to special design products, noting that buying two wedding dresses has become a very common trend. According to data obtained from the White Goods Industrialists Association of Turkey, A+ energy class refrigerator sales fell from 80% to 55% in 2018, while A++ energy class refrigerator sales rose from 17% to 42%.