About 1,200 startups from 40 countries participated in this year's Eureka Park event organized parallel to the CES trade show. More than 20 entrepreneurs demonstrated their ideas, enjoying national and international exposure and support

The Eureka Park event has been organized since 2012 and has so far generated $1.2 billion in funding for startups. Some 20 startups from Turkey were also among this year's participants. The event is expected to discover the billion-dollar giants of the future, offering a prime opportunity for startups to make a direct entrance into the American market.

The startups that exhibit their products and services at the Sand Expo enjoy the opportunity of finding investors, corporations or companies to support them. The entrepreneurs showcased their projects on stage while different competitions.

From artificial intelligence (AI) to the health care industry, from gaming to networked internet devices, different startups look for their first step to enter the U.S. and global market at CES. France, which brings the second-highest number of participants to Eureka Park after the U.S., was represented with 300 startups this year – meaning one out of every four startups was French.

Some of the graduates of Türk Telekom startup acceleration program PİLOT could easily carry their projects to the U.S. as Turkey's leading information and communication technologies company supports startups introduce their projects internationally.

Many startups have the opportunity to expand relationships and their customer networks at the event, which is also attended by giant technology companies. These entrepreneurs explain themselves to investors during the competition held at the event, in hopes of finding the right investor.

With initial support from Kickstarter, a crowdfunding platform, WELT facilitates the monitoring of health information via a smart belt. Users can easily track how far they have walked and how long they have remained seated. The belt is compatible with the Apple iPhone iOS and Google Android. 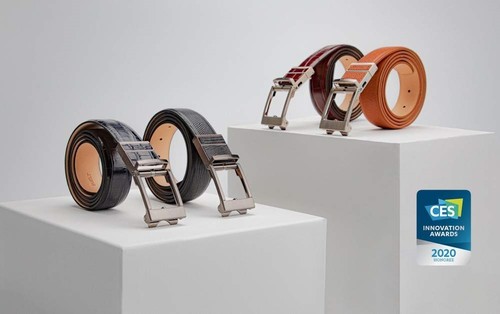 WELT, a startup that received funding from crowdfunding platform Kickstarter, is a wellness belt that tracks key health data and provides tips and warnings for better health. (Photo by WELT)

Through multipurpose sensors, Oval Home enables users to become aware of the problems that may arise in their home or office while they are away. Oval Home warns home or business owners of potential issues detected by small sensors that can analyze temperature, light, humidity, movement or moisture. The starter kit allows you to be notified when a prohibited medicine cabinet is opened or a water tap is used. The product comes with a hub and two sensors.

This year's digital-physical mix-up of startup toys for children was remarkable. Tori is a magnetic card that matches a small portable magnet attached to various game controllers, evoking a similar feel to the football or automobile cards we collected as children. Children can fly the digital representation of their spacecraft by moving what is real in their hands. Tori includes a variety of games from the spacecraft game Explorer to the Angry Birds-like Jungle Rescue and the Minecraft block building game Supreme Builder. It offers many opportunities for children to create their own controllers or decorate objects with the game. Parents can monitor screen time using the app and adjust the challenges.

ON-CALL YOGA INSTRUCTOR ON YOUR PHONE

If you spend a lot of time doing yoga but cannot see its benefits, sensors may be able to help you improve your poses. Yoganotch applies motion capture technology to fitness, as its creators explained at Eureka Park at CES. Yoganotch is a personal yoga assistant platform that emphasizes personal preferences. Mark one of the yoga classes, position the sensors and see how useful the AI platform can be.

The way to protect national security and technology exports is through the regulation of personal data. Related Digital CEO Sedat Kılıç pointed out that the retail sector, which operates with a low-profit margin, has a high awareness of data.

As it has around the world, the subject of data has also gained importance in Turkey recently. Every country is trying to keep its own data. The government and regulatory authorities in Turkey have also acted on this issue, which is very important in terms of security. Countries preserving their own data are also taking the first step to becoming exporters. However, when domestic technology companies do not have easy access to capital, there is a risk that they will be sold to foreign companies that are well below their value. The CEO of Related Digital, one of the new generation data companies in Turkey that export software, pointed out that the retail sector has a high awareness of data.

"Retail is a sector with very low-profit margins. Therefore, each data needs to be analyzed carefully," Kılıç said. "You have a few shots, and you have to make them right. Not the data, but the value of analyzing it increases. In the past, consumers were segmented only by gender and age. At this point, it has become clear that segmentation should be done according to life habits. In fact, I think that every person needs to be a segment. Some companies are starting to use this, gradually making private communication for everyone, and the business is getting micro."

Kılıç pointed out that technology companies in Turkey have a shortage of money. "What our American rivals find the easiest is money. We must grow by making money in Turkey," he continued. "Our second problem is also customization demands. Turkish companies can never demand what they demand from Turkish technology companies from foreign technology companies doing the same job. They want very serious customization from us. These can be situations that raise our costs and put our product in trouble from time to time. But they do not want it from American and European companies. Customization is also the biggest obstacle to globalization, and we are trying not to do it today. Because you can solve a customer's request with customization, but it carries the risk of making other customers unhappy."

Kılıç pointed to the fact that technology companies doing business through data can be sold very cheaply. "Another risk posed by the difficulties experienced by Turkish technology companies in reaching money is that they can be sold at very cheap prices. Our government has made serious advances in promoting and protecting Turkish software companies," Kılıç further stressed. "When I say protect, I do not mean sponsoring but preferring the Turkish company when two companies are doing the same job. Because today, the main income sources of developed countries are software exports. Today, in many export items, very large import inputs are needed. The software is not so. You only sell your dream where you are and you can scale it to the whole world."

Kılıç underlined that the companies generally act conservatively in terms of data. "The most important feature that distinguishes Turkey from other countries in marketing is as follows," he noted. "I have been working on technology for 30 years, and I have seen this very clearly. Turkish people are initially conservatively against technological developments, but they are closing the gap with great speed. In countries like ours, we usually come from behind, then keep up with those countries and outrun them in two years. After outrunning them and getting involved, we grow very quickly all over the world, especially in mobile."

Kılıç said the company released a new product called Express for small and medium-sized enterprises (SMEs). "We are constantly improving this product, and our goal is to open the product to the whole world. It is a much simpler product, an established system for email marketing," he added. "With this system, we aim to attract SMEs to the world of digital marketing. We also established a special department to provide free support to universities and startups. The startup ecosystem in Turkey is very complicated. We listened to a startup six months ago and took it into our own system. If ecosystems support and develop each other, then very rapid growth can be achieved."

The Related Capital CEO had an interesting observation that connects our nomadic spirit to the origins of our programming skills. "I believe there is a really good software industry in Turkey. I think we are very suitable for code writing, probably because we are a nomadic society, thanks to our survival instinct that has formed over thousands of years. We know the short cuts; we know how to survive. Therefore, in our software sector, two engineers can do a job that requires 10 engineers in a foreign company. And they can do it very quickly. So, we may have an abundance of software companies, and we might have a chance to export an abundance of software," he said.