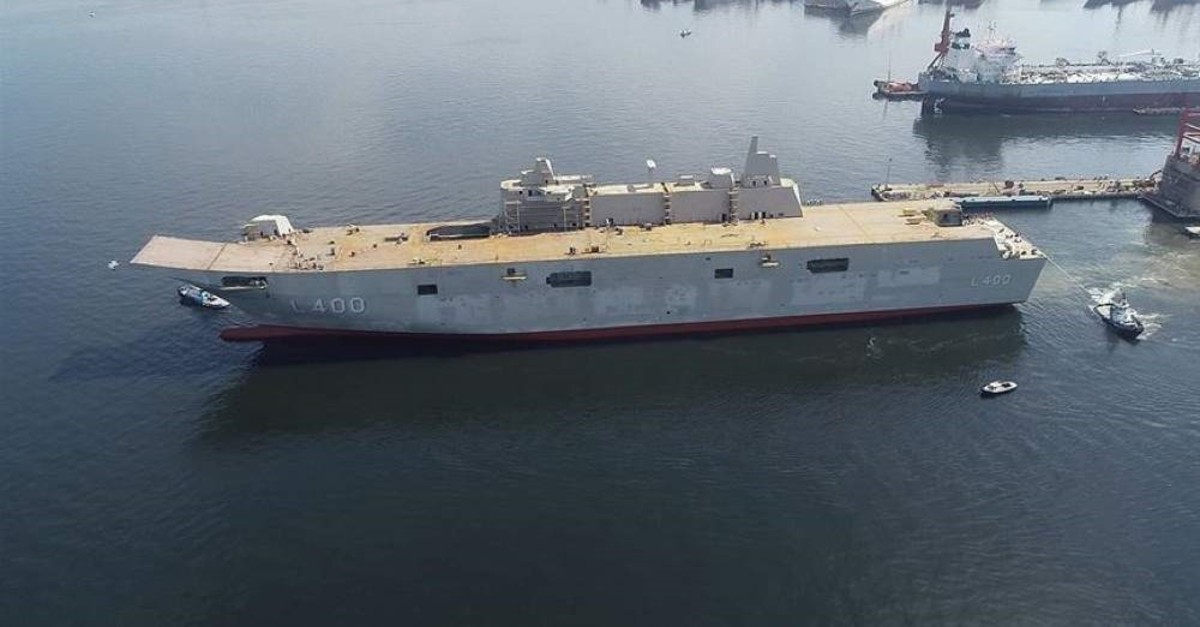 In the aftermath of a turbulent time in the second half of the year, 2019 was a period of recovery for the Turkish economy and laid the ground for a much-needed transformation supported by a long list of reforms. While some of the grand projects in infrastructure, energy and defense were accomplished last year, Turkey is looking to inaugurate more projects in every sphere of economic activity this year, President Recep Tayyip Erdoğan said Thursday.

In an address of annual evaluation in Ankara, Erdoğan stressed that Turkey completed 1,616 projects out of the 1,451 in its 2019 action plan.

"By implementing strong policies in the face of the growing global uncertainties and speculative movements, we managed to restore the growth in the Turkish economy last year," the president said and cited the 0.9% growth in the third quarter of last year. The median expectation in the market for the last quarter growth is around 4% to 5% – signaling a positive growth rate annually.

Speaking of the megaprojects in Istanbul, Erdoğan also touched on the newly built mega-Istanbul Airport, which began fully operating in April 2019 following the huge move from Istanbul's Atatürk Airport.

In June this year, the second phase of Istanbul Airport will be inaugurated, the president said. The airport is projected to serve 200 million passengers annually in full capacity after the completion of all four phases with six runways by 2028.

The government is planning to initiate the construction of another mega infrastructure project in Turkey's biggest metropolis, Kanal Istanbul.

Referring to the maritime traffic in Istanbul's Bosporus, Erdoğan underlined the importance of building a new canal. "It is not possible to prevent maritime traffic in the Bosporus legally, economically and socially. The only solution is to build an alternative canal," he added and said, "We are soon launching the Kanal Istanbul project."

The planned 45-kilometer canal to be built west of the city center on the European side of the Istanbul province aims to boost the city's marine through-traffic capacity. The megaproject, which aims to prevent risks posed by vessels carrying dangerous shipments through the Bosporus, was approved by the country's Environment and Urbanization Ministry.

While elaborating on the industrial development, Erdoğan stressed that the number of organized industrial zones rose to 315 with an addition of 122. The number of businesses operating in these zones totaled 53,000, where 1.9 million people are employed.

The Turkish government has ramped up efforts to increase employment as the unemployment rate is still high at 13.4%, Turkish Statistical Institute (TurkStat) data showed in November. According to the new economic program that covers the 2020-2022 period, Erdoğan said Turkey aims to reduce the unemployment rate to 9.8% in 2022 by adding jobs for 3.2 million people within the next three years.

This year, Erdoğan said, the initial private sector investments in the Adana-Ceyhan Energy Industry Zones will also be launched.

In 2019, Turkish foreign trade also delivered a positive performance despite a global slump in commercial activities. Turkish exports rose by 2% and reached $180.5 billion. The foreign trade deficit shrank to $29.9 billion last year from $54.3 billion the previous year, corresponding to a 44.9% decrease in the trade deficit.

In the 2019 list announced by the World Trade Organization (WTO), Turkey ranked seventh among the 50 top global exporters that recorded the highest increase in exports.

The president emphasized that exports made a 4.7-point contribution to the growth in the first three quarters of last year – the highest contribution of trade in the last 18 years.

"In 2020, we will continue to support our businesspeople to bring our flag to all and any corner of the world and deliver our best efforts to ensure trade surplus," Erdoğan said. Turkey's export-import financing bank Eximbank is planned to provide $50 billion in financing for the foreign trade operations, he added.

Mentioning Turkey's satellite studies, he said Turkey will launch the Turksat 5A satellite in the third quarter of this year, and the first domestically produced telecommunication satellite, Turksat 6A, next year.

The Turksat 6A satellite was developed by the Spacecraft Assembly, Integration and Test (AIT) Center in Ankara, Turkey's capital.

"With this project, Turkey will become one of 10 countries in the world that produces its own telecommunication satellite," Erdoğan remarked.

He reiterated that Turkey, which established its space agency in 2018, would reveal its National Space Program in 2020.

Elaborating on the development of the domestic energy industry, Erdoğan said Turkey's installed power capacity will go up to 91,267 megawatts (MW) by the end of 2019 from 56,421 MW. "Some 73% of the installed power in operation relies on renewable energy," he noted.

While the Turkish energy portfolio had no solar power until 2009, the current capacity has reached 5,894 MW, and the wind power capacity soared to 7,591 MW from 19 MW in the last 17 years.

Referencing the international energy infrastructure projects, Erdoğan pointed out that TurkStream, which carries Russian gas to Turkey and Europe, as well as the Trans-Anatolian Natural Gas Pipeline project, were launched last year.

Over 90% of the Trans Adriatic Pipeline (TAP), the European leg of the Southern Gas Corridor (SGC), is complete and will start delivering Azerbaijani gas to Europe by October 2020.

As for TurkStream, it began pumping gas to Bulgaria, Greece and North Macedonia earlier this month.

The Turkish defense industry has gone through a profound transformation over the last 17 years, domestically manufacturing a series of military platforms. The defense industry has recorded up to a 70% rate in domestic defense products as opposed to just 20% in early 2000, while the defense projects, the number of which recorded only as 62 back in 2002, has reached a total number of 700.

Erdoğan stressed that the annual defense industry and aviation turnover has reached almost $9 billion, while the exports recorded a revenue of $2.7 billion.

In 2019, over 800 armed vehicles, with different types bearing various configurations, were delivered to Turkish security forces.

The domestically developed torpedo AKYA has also successfully completed its tests, Erdoğan noted, adding that some 19 ATAK helicopters were delivered to the Turkish army in 2019 alone, making the total number 56. Erdoğan highlighted that the TCG Kınalıada, the fourth vessel developed under the MİLGEM project, which was initiated in 2000 to locally design and build a fleet of multipurpose corvettes and frigates that will replace older ships, was also delivered to the Turkish Naval Forces in 2019, adding Turkey's largest-ever warship the TCG Anadolu set to be delivered to naval forces this year.

In the field of unmanned aerial vehicles (UAV), Turkey has already begun exporting armed and unarmed drones with the Bayraktar TB2 – which is developed and manufactured by Baykar Makina.

"This year, we will also witness the delivery of the Akıncı armed drone," Erdoğan said. Operated with two turbine engines, the Akıncı can carry nearly 1.5 tons in useful loads – 900 kilograms external and 450 kilograms internal. Flying at an operational altitude at 40,000 feet, the Akıncı can stay in the air for 24 hours. The platform can be controlled via domestically developed satellites. It could also be equipped with air-to-air missile systems.

Turkey's locally developed low altitude defense missile system (Hisar-A, 15 km) will also be delivered to the Turkish military this year, Erdoğan said. The president also indicated that a high-power laser, which has been domestically developed by Turkey's leading defense firms including ASELSAN will be integrated into Turkey's Kirpi armored vehicle.