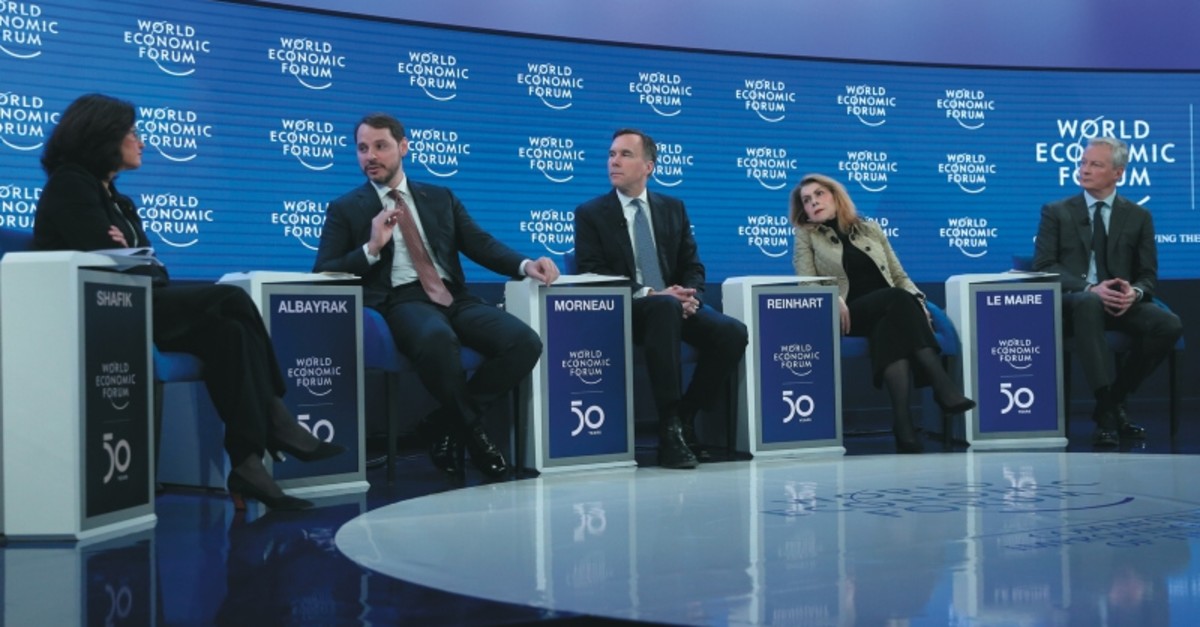 Having started to enjoy economic recovery and set to capitalize on further growth this year, the Turkish economy also implements sound private and public debt management

Turkey’s financial aptitude to manage both the public and private debt stock, which has been on a soaring trend both in advanced and emerging economies, along with its ability to restore economic growth thanks to a strong base of production, export and population; give the country a competitive advantage compared with its peers, Treasury and Finance Minister Berat Albayrak said Thursday during the World Economic Forum.

The country’s public debt to gross domestic product stands at 32%, well below the Maastricht criteria and the EU average, which hovers around nearly 90%, Albayrak said during remarks at a session titled “Shaping the Global Growth Agenda” at the 50th annual forum in Davos, Switzerland. He emphasized that both the public and the private sector have a robust capability to manage the debt stock and strong balance sheet.

According to the latest data from the Treasury and Finance Ministry, the general government debt stock, defined in terms of European Union (EU) criteria, was nearly TL 1.3 trillion, corresponding to 32.1% of GDP at the end of December. The public net debt stock reached TL 643.1 billion or 15.7% of GDP during the same period. More than half of the debt stock is denominated in the local currency while 49.7% is in a foreign currency.

European Commission statistical body Eurostat’s data released Tuesday demonstrated that the government debt to GDP ratio in the euro area stood at 86.1%, compared with 86.4% at the end of the second quarter of 2019. In the EU-28, the ratio decreased from 80.4% to 80.1%.

The highest ratios of government debt to GDP at the end of the third quarter of 2019, in comparison to the same period of the previous year, were recorded in Greece with 178.2% and Italy with 137.3%. The surge in Portugal’s public debt stock was recorded at 120.5% while Belgium saw a 102.3% rise in the debt stock. The rise in France came at 100.5%.

Speaking of corporate and private debt, the minister underscored that the Turkish corporate debt level is better compared to other emerging markets and far below the corporate debt in advanced economies.

“Most of the Turkish private sector has accumulated profits and revenues thanks to the competitive export capacity. Most of their borrowing is in the local currency. This has enabled them to manage their borrowing capacity and ensure a strong balance sheet,” Albayrak explained.

According to the central bank data, the private sector's short-term external loans, excluding trade credits, totaled $10.2 billion, down $5.2 billion in November, compared with the end of the previous year. Some 49.6% of short-term credits were underwritten in U.S. dollars, while the rest were in euros, Turkish liras and other currencies with 29.6%, 20.3%, 0.5%, respectively.

On the long-term side, the private sector's overseas loans amounted to $193.5 billion in the same period, down $15.9 billion from the end of 2018. The U.S. dollar-dominated long-term loans with 60.9%, while the euro-borrowings accounted for 33.7% and the Turkish lira followed it with 3.8%.

Since the financial crisis of 2008, the global debt has been on the rise as the central banks have kept the interest rates low to spur global growth and manage the crisis. While the global debt stock was only $97 trillion in 2007 ahead of the meltdown, it hit an all-time-high of nearly $253 trillion in the third quarter of 2019, the data of the International Finance Institute (IIF) has recently shown. Total debt across the household, government, financial and non-financial corporate sectors soared some $9 trillion in the first three quarters of 2019, the report said. The IIF report also revealed that the debt in the emerging market rose more than two-fold since 2010 to $72 trillion. “The surge has been driven mainly by the sharp buildup in non-financial corporate debt to over $31 billion,” the institution said and added, “This is a contrast to mature markets, where the government sector has been the biggest driver.” Moreover, the global debt is estimated to exceed $257 billion in the first quarter of this year.

During his remarks at the Davos session, Albayrak also elaborated on Turkey’s growth performance last year and the trajectory for this year.

“No one would expect Turkey to recover from the currency crisis, but we have ensured currency stability and restored positive growth in 2019,” Albayrak said.

After a financially and economically turbulent period that kicked off in the second half of the year in 2018 and prolonged into the first half of 2019, the Turkish economy had been battered by currency volatility, high inflation and high interest rates, resulting in tumbling domestic demand by consumers and investors.

Turkey’s GDP entered a promising era of growth in the third quarter of 2019, breaking three consecutive quarters of contraction. The economy grew 0.9% year-on-year between July and September of this year, according to the Turkish Statistical Institute (TurkStat) data.

Compared with the second quarter, the Turkish economy expanded by a seasonally and calendar-adjusted 0.4%, its third positive quarter-on-quarter in a row, TurkStat data showed. In the first two quarters, the economy contracted 2.3% and 1.6%, respectively, on an annual basis. In 2018, the economy posted an annual growth rate of 2.8%, narrowing in the last quarter. The common market expectation for the fourth quarter estimates ranges from 4.5% to 5%.

“Following the 2008 financial crisis, Turkey’s exports shrank 30% in 2009. Yet our exports surpassed $180 billion last year after a year of economic turmoil,” Albayrak further indicated in a bid to emphasize the agility of the Turkish economy against shocks and turbulent times.

In an evaluation of how Turkish exporters and the private sector actors were able to increase their export performance and how the Turkish economy has managed to perform positive growth in 2019, the minister highlighted that the regional and domestic crises and problems have taught a lot to the Turkish public and private authorities.

“Turkey has a very strong record of fighting regional and local crises. Not only the public sector but also the private sector has learned a lot from the regional and domestic problems,” Albayrak said. “They expanded the capacity to integrate their operations to the changing circumstances.”

The treasury and finance minister also delved into the operations of the central bank. In addition to its primary goal to achieve price stability, Turkey’s central bank also implements policies to ensure financial stability to mitigate the risks of reducing financial shocks.

“In order to ensure the growth of Turkey, which has a gigantic base of production and population, the central bank also works to bring financial stability,” the minister emphasized.

The financial stability Turkey has managed to restore, Albayrak said, has led to a huge drop in the country’s credit default swaps (CDS). The country’s five-year CDS dropped to 237.69 points yesterday, from a record-level of 566.38 points on Sept. 4, 2018.

In a bid to manage price stability, the central bank along with the entire economy administration implemented a set of measures and reforms spanning throughout the year. Thus, 2019 was a year that saw inflation drop from around 20% to single digits, a transition from recession to growth again, all-time high numbers in exports and a year in which record-breaking current account surpluses were observed.

Inflation had become a pressing issue for the economy since the second half of 2018 when it surged to almost 25.24% in October as steep depreciation in the Turkish lira pushed up the price of imported goods. Since the beginning of 2019, inflation fell by 8.51 percentage points from 20.35% in January. It had eased to 9.26% in September when it hit single digits for the first time since July 2017 before dropping to 8.55% in October, its lowest since December 2016. The inflation rate in December came in at 11.84%. Albayrak also expressed that the inflation will be sustained at single-digits this year.