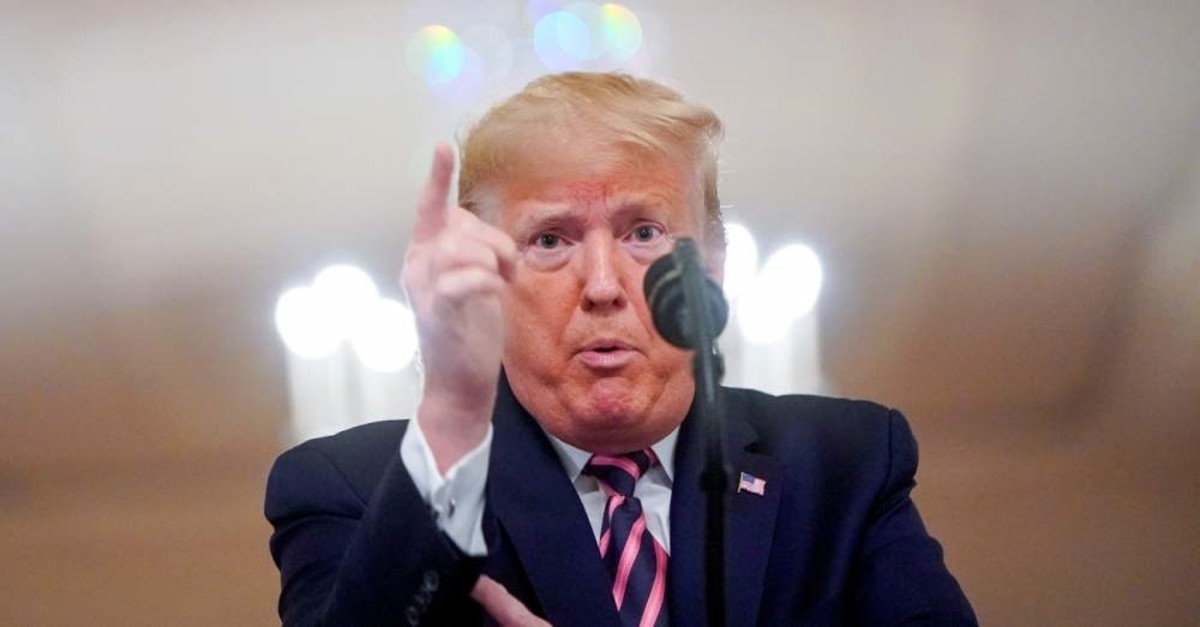 U.S. President Donald Trump delivers a statement about his acquittal in his Senate impeachment trial during an event celebrating his acquittal in the East Room of the White House in Washington, U.S., Feb. 6, 2020. (Reuters Photo)
by Feb 11, 2020 9:54 pm

An emboldened President Donald Trump has set his sights on restructuring the more than $1 trillion U.S. trade relationship with the European Union, raising the specter of another major trade war as the global economy slows and he seeks reelection.

Trump, who recently signed a Phase 1 trade deal that cooled a bitter trade war with China, has called the EU's position on trade "worse than China" and threatened to impose tariffs on its cars and other products.

European officials say they're willing to work with Trump to address some irritants in the relationship, but they warn that they'll retaliate against any U.S. efforts to punish the trading bloc.

"In the economic realm, we're evenly matched. And we will defend ourselves," Norbert Roettgen, a senior German conservative lawmaker, said on Friday after meetings with White House and State Department officials. "We will respond to U.S. tariffs, and we know how to structure them to be effective."

On Friday, two days after Trump was acquitted in his impeachment trial in the U.S. Senate, the U.S. ambassador to the EU, Gordon Sondland, said he was being recalled from his post, making the path of any future negotiations even more uncertain. Sondland had testified during the impeachment inquiry in the U.S. House of Representatives.

The near-term outcome may be a "mini-deal" like the Phase 1 agreement signed with Beijing last month that doesn't solve bedrock issues but will allow both sides to declare a truce, trade experts say.

The EU was the top U.S. export market in 2018 before the United Kingdom left the bloc, led by aerospace products and computers. After scotching a free-trade agreement with Europe, the Trump administration is focused on shrinking its growing deficit in goods, which hit a record $178 billion in 2019.

In December, the World Trade Organization's appellate body, which acts as a supreme court for international trade disputes, became paralyzed after the Trump administration repeatedly blocked the appointment of new judges.

The White House and Brussels are essentially without an arbitrator, at a time when EU officials say Trump appears strengthened by his acquittal in the impeachment process and has amped up his polarizing rhetoric.

"We have allies. We have enemies. Sometimes the allies are enemies, but we just don't know it," Trump said at a prayer breakfast in Washington last week, remarks that have put European officials on edge.

After a positive first meeting between Trump and the new leader of the European Commission, Ursula von der Leyen, at the World Economic Forum in Davos, Switzerland in January, Trump, in a surprise move, expanded steel tariffs first put in place in 2018.

EU officials say they are trying to move the relationship forward in a "transactional" manner.

Tomas Baert, head of trade and agriculture for the EU's delegation in Washington, said on Friday that EU Trade Commissioner Phil Hogan will travel to Washington monthly to try to work out a limited deal "that is tweetable." Such a deal would allow Trump "to say that we went from the worst trade relationship to the best relationship," Baert said.

That doesn't mean, however, that Europe will be consuming "chlorinated chicken," he said, or buying genetically modified agricultural products, referring to U.S. practices shunned in Europe.

The Trump administration, which has pursued an "America First" agenda aimed at rebalancing global trade flows in favor of the United States, has threatened to levy 25% tariffs on foreign cars and parts from Europe.

On Friday, top White House economic adviser Larry Kudlow said the Trump administration had temporarily suspended its plans to tax European auto imports, "while we work through a good-faith effort with respect to the possibility of an EU trade deal."

But Baert believes the tariff threat will continue because Trump "is a tariff man and that's the language that he speaks." Any U.S. tariffs will be met with retaliation, Baert emphasized. "We're not offering our other cheek if we are going to be hit on one of them," he said.

A scaled-down deal could include enhanced market access for European apples and pears, on one hand, and U.S. seafood, on the other. Food safety standards that have kept many farm goods out of the European market are also on the table, according to several sources briefed on talks.

"It would be tricky to do something comprehensive, but a mini-deal is certainly on the table," said Miriam Sapiro, a former acting U.S. trade representative in the Barack Obama administration and now the co-head of Sard Verbinnen's Washington office. "I think it's doable and it's realistic if both sides will stay focused on areas of convergence."

Trump's concern about the Nov. 3 U.S. election offers some promise for a modest agreement, Germany's Roettgen said. "For Trump, it's important that he can sell a trade deal to voters, and that's an opportunity for us to be able to achieve something," he said.