Turkey and Germany: Time to fix the rough patch 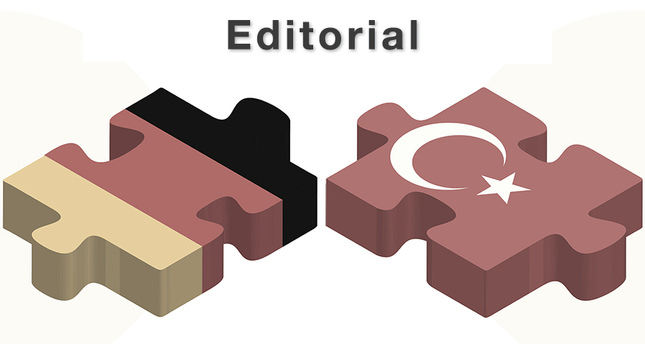 by The Editorial Board May 24, 2014 12:00 am
Over the past decade, bilateral relations between Turkey and Germany have been almost continuously strained. Particularly since the German government changed hands in 2005, Turkey's AK Party government has been visibly unable to count on Germany's support for its EU membership bid despite its reformist character. Meanwhile, the eurozone crisis rendered the EU a less attractive organization as Turkey, now an economic powerhouse, turned to new and unsaturated markets in Africa, Asia and Latin America. Developments on both sides, in this regard, did little to encourage cooperation between the two countries.

With the prime minister's career plans still unclear, the public address will nonetheless serve as a measure of his popularity among Turkish immigrants in Germany.

Turkey and Germany, whose political partnership failed to match their exemplary commercial relations in recent years, are compelled to approach one another in a more constructive fashion amid pressing humanitarian and geopolitical problems in and around Europe. The state of world politics today requires emerging powers and developed nations to join forces in order to generate and safeguard political and regional stability. In this regard, there is no doubt that the two nations have the potential to help develop lasting remedies to ongoing troubles across the EU's borders.

Over the years, the German government's staunch opposition to Turkey's EU membership bid has proved largely counter-productive as Turkish public opinion gradually turned away from Germany, a country that had in the past been considerably more popular on the Turkish street. Successive attacks against Turkish immigrants in Germany and the widespread perception that the German authorities have been unwilling to investigate atrocities, including a number of attacks associated with the extreme right-wing National Socialist Underground (NSU), have further damaged the once-stellar image of the nation among Turks. Political tensions, coupled with the German media's often inaccurate, openly biased and therefore misleading coverage of Turkey, did little to fix the rough patch our two countries have been going through. As an increasingly more confident nation, Turks not infrequently find the German media's treatment of their country offensive, if not outright racist. The last straw came when a headline by Der Spiegel recently told the Turkish prime minister to "Go to hell." Fostering cooperation between the two governments requires commitment from both nations.

First and foremost, certain media outlets in both countries, which have thus far not shied away from adding fuel to the fire, need to assume a more constructive approach. Such efforts inevitably require input from the Turkish immigrant community in Germany, whose successful integration into German society and engagement in German politics often provides the best remedies to senseless hatred and categorical opposition. Similarly, we believe that certain media outlets in Turkey should reconsider their tough stance on Germany.

Despite humanitarian and geopolitical troubles brewing in and around the EU the two governments seem reluctant to improve their relations. This has to change.

We, Daily Sabah believe, before making irresponsible statements that would destroy mutual trust, that statesmen, political leaders, actors and media in Germany should consider the long-term interest of a partnership between Germany and Turkey. As Daily Sabah, we hope that both the Turkish government and their German counterparts will choose to join forces and complement each other's efforts in world politics. We continue to pledge our support for Turkey's EU membership yet remind all concerned parties that the accession process remains threatened by the absence of desperately needed concrete promises and a clear roadmap.
Last Update: Jul 31, 2014 4:34 pm
RELATED TOPICS