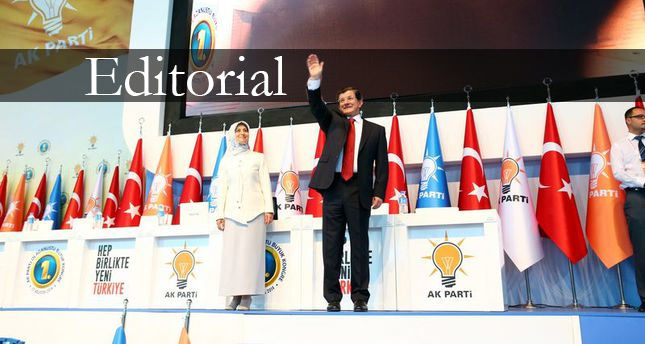 by The Editorial Board Aug 30, 2014 12:00 am
The election of AK Party chairman and Prime Minister Recep Tayyip Erdoğan as Turkey's 12th president on Aug. 10, 2014, has led to speculation about the country's political and economic stability over the past weeks. Thus far, commentators have concentrated on the future relationship between the new Turkish president and Ahmet Davutoğlu, who replaced him as party chairman on Aug. 27 and will become the nation's next prime minister within the next days. We have repeatedly heard the point that the new AK Party government's greatest challenge would be to keep President Erdoğan's influence under control and, by extension, heard pundits associate the Davutoğlu administration's power with its eagerness to clash with the newly-elected president. The key to Mr. Davutoğlu's success, however, will depend on his ability to make meaningful contributions to the New Turkey agenda as an active prime minister as opposed to fighting with Erdoğan, who shall ostensibly continue his service as the broader political movement's leader albeit in a new official capacity.

Over the years, the AK Party has overcome serious challenges to its rule, including a nearmilitary coup in 2007, thanks to its immense capacity for change and innovation. Having come to power in 2002 as a political party whose chairman, Recep Tayyip Erdoğan, remained ineligible to participate in parliamentary elections due to a brief prison sentence in the late 1990s over his recitation of a patriotic poem at a public event, the AK Party has demonstrated an indisputable ability to overcome obstacles and channel the energy of turmoil into its political drive. As such, the movement has gone down in Turkey's history as a unique political organizations distinguished from its competition by its resilience, commitment to core principles and ability to address its problems and shortcomings that arose along the way.

Today, the party leadership's commitment to the three-term limit for parliamentarians, mayors and other offices within the organization in accordance with party by-laws promises to usher in a new generation of politicians that will continue its tradition of reform, stability and restoration. Since its foundation in 2001, the AK Party has proved uniquely able to re-invent itself through new faces in the face of challenges. To facilitate a mild transition and ensure the know-how of the party's 12-year rule, however, it remains crucial for the movement to oversee the formation of experience-sharing platforms, including nongovernmental organizations, and find ways to keep politicians subject to the term limit involved and included.

The incoming members of the AK Party leadership and the party organization, with help from their more experienced predecessors, will concentrate their efforts on four key areas. First and foremost, drafting a new constitution to replace the junta-inspired, anti-democratic 1982 Constitution remains a pressing issue on Turkey's political agenda and a crucial step toward uniting individuals from various ethnic and religious backgrounds on the basis of equal citizenship. Having experienced a politically turbulent period since the Gezi Park protests in May 2013, the AK Party government should incorporate its attempts to draft a new constitution onto the broader agenda of democratic reform and remain committed to its objective of attaining full membership in the European Union despite discouraging signals from its Western counterparts. Meanwhile, the AK Party's new leadership will have to maintain the Turkish economy's positive drive and take the necessary measures to take the next step toward economic development to complement its commitment to the country's democratization and equal citizenship for all members of society regardless of their ethnic and religious background. Finally, securing the nation's southern border in the face of rising threats in the Middle East, especially the most recent wave of violent conflict and extremism in Syria and Iraq, will be a priority item on the new government's political agenda. Preventing national security concerns from jeopardizing Turkey's cooperation with key allies in the region and beyond, meanwhile, will put the new AK Party government's foreign policy to the test in coming months.

Commentators may be right about the challenges that leadership change entails, but it is important to acknowledge that the Erdoğan presidency and Davutoğlu's new roles as AK Party chairman and prime minister embodies the movement's capacity for innovation and ability to turn risks into valuable assets. In this regard, the presidential election did not cost the movement its leader but facilitated the emergence of yet another key figure from its ranks.
Last Update: Aug 30, 2014 1:50 pm
RELATED TOPICS