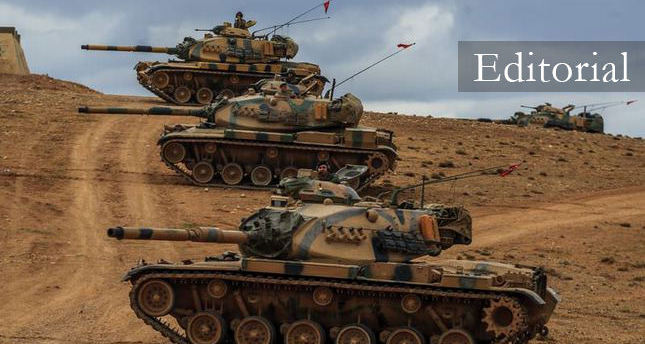 by The Editorial Board Oct 01, 2014 12:00 am
Over the past weeks, reporters from domestic and international media outlets have been stationed in Şanlıurfa, Turkey to report on the battle in Kobani, where the Islamic State of Iraq and al-Sham (ISIS) has been fighting the Kurdish People's Protection Units (YPG). The most recent clashes in the border town have triggered a massive influx of Syrian Kurdish refugees into Turkey that led to the admission of some 160,000 Syrian nationals in just one week. At the same time, the emergence of a much-anticipated international coalition against ISIS, the Turkish government's successful rescue operation to free the 49 hostages from the terrorist organization and a number of mortar shells hitting Turkey's border towns have brought the issue to the forefront of media attention. This week, the Turkish Parliament will vote on the government's request for the extension of authorization to engage in military operations inside Syria and Iraq.

Although recently many media outlets seem fixated on the battle in Kobani, the view from Turkey's southern border has remained largely the same for over three years. The conflict not only caused security challenges but also placed a serious financial burden on the economy. According to government officials, the country has spent approximately $4 billion (TL 9.1 billion) for humanitarian relief efforts. Currently, the Disaster and Emergency Management Authority (AFAD) operates 22 housing centers across ten provinces and provides housing, healthcare, education and psychosocial support to some 225,000 Syrian in refugee camps in addition to hundreds of others living in the cities. The refugees include Arabs, Kurds, Turkmens and Yazidis – with very little support from the international community, whose total contribution to relief efforts amounted to merely $250 million. Having successfully met the challenge of hosting over 1 million displaced Syrians since the Syrian civil war started in April 2011, the country now has to bear an additional burden as over 160,000 people have escaped the Syrian border town of Kobani, or Ayn al-Arab, which has been besieged by ISIS militants during the last two weeks. With the most recent wave of Syrian refugees, the total number of Syrian nationals in Turkey has exceeded 1.5 million. Currently, the Syrian refugees constitute approximately 2 percent of the country's entire population.

A broad coalition of Western and Arab nations has been formed againt ISIS and a number of aırstrıkes were carried out over the last week. These will certainly limit ISIS's operations in Syria and Iraq but it is not enough to only hit ISIS targets. A wider strategy against the disorder in Iraq and the Assad regime in Syria is also needed. The fight against ISIS will not succeed until and unless the international coalition focuses on Syria as well. After all, it is the Asad regime that has created the conditions for the rise of ISIS and its likes in the region.

With these caveats in mind, Turkish authorities believe that establishing safe zones inside Syria is a security and humanitarian necessity, since such areas could serve the needs of internally displaced Syrians and create a safe haven to mobilize and help the moderate groups operating within the Syrian opposition.

Since the early stages of the Syrian civil war, the Turkish government has repeatedly called for a comprehensive and lasting solution while warning its regional and NATO allies about the possible spillover of violence. Although Western governments, particularly the Obama administration in the U.S., proved reluctant to get their countries involved militarily in yet another war in the Middle East, time has proven the Turkish authorities right. President Obama's admission that U.S. intelligence agencies underestimated the ISIS threat is a telling example of allies not listening to one another.

Today, the U.S. government remains unwilling to put boots on the ground and wage another costly ground war in the Middle East to fix a problem that it helped create. In this regard, Turkey's request and recommendation to establish a safe zone in northern Syria represents the only viable and long-term option on the table.

Meanwhile, it is important to note that the government's decision to request authorization from Parliament regarding military engagement in Syria and Iraq does not necessarily mean that Turkey will put Turkish soldiers on the ground. The authorization, however, is needed of helping contain the ongoing battle between ISIS militants and YPG forces within Syrian borders. Having deployed several dozen tanks and armored vehicles near the border gate at Mürşitpınar, Şanlıurfa, the authorities have already sent a strong message across the border regarding the military capabilities of one of the largest armies in the world.

At this point, the Turkish government should create a road map to be prepared for potential national security threats and to negotiate all options with the international coalition to meet existing and future challenges in the region. The most recent developments have clearly established that Turkey must assume a more determined position regarding the Syrian civil war in order to protect its national security, prevent another human tragedy in this part of the world and help protect the civilian population of Kobani and the rest of Syrian from a brutal and bloody war that should have been contained and prevented long time ago.