Rule of law versus the war of perception: The Tahşiye case 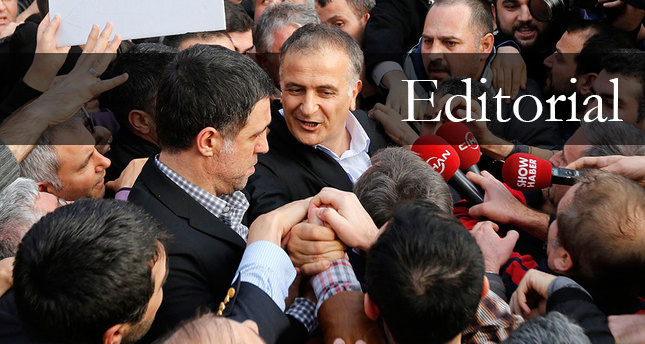 by The Editorial Board Dec 16, 2014 12:00 am
The extraordinary developments of the past few months are causing a high degree of misperception and misunderstanding by observers. The complexity of the subject matter, scope of judicial proceedings and the way they were presented by part of the local and international media are allowing misperception to rule the roost.

The detentions on December 14 were part of an investigation, referred to as the Tahşiye case, into the illegal activities of the Gülen Movement, led by the U.S.-based imam Fethullah Gülen. Members of the movement, so-called Gülenists, are suspected of perpetrating criminal activities through their operatives within the state, especially the judiciary, the police and the media. The December 14 operation was the result of complaints filed against the Gülen Movement by several individuals from the so-called Tahşiye group, which was allegedly victimized by the movement. The prosecutors who handled this case conducted an investigation and found that the complaints had merit and that the evidence against Gülen's rival was forged as part of a concerted campaign, with police and media angles. Believing that they had a strong case, the prosecutors in charge decided to detain and question around two dozen individuals who were involved in the plot. After the first day, three suspects have already been released.

It is important to understand that the journalists who were detained are not being questioned for their journalistic activities. The allegations are about leading a criminal organization and conducting illegal activities, all of which contradict professional ethics and the tenets of journalism.

It is imperative for the investigators and prosecutors to conclude this operation as soon as possible and fully inform the public about the allegations and indictments as well as the process of the investigation. What we are witnessing is a judicial process and one needs to wait until the eventual court ruling before making any judgment.

International media outlets also need to look into the details of the case in order to not come to a swift and simplistic conclusion, which unfortunately has been the case. Some respected media outlets sadly chose to ignore the charges against these individuals and decided to accuse the government for the detentions.

Daily Sabah believes that freedom of the press is one of the basic virtues of a democracy. However, no one can argue that people or groups exploiting their power within the media and the judiciary to victimize rivals should be immune from prosecution just because they are journalists. Such immunity will not only destroy the profession, but will also become the biggest threat to the freedom of the press in the future.