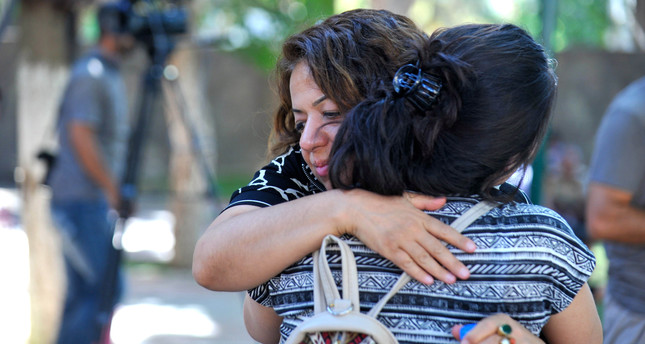 by The Editorial Board Jul 20, 2015 12:00 am
Monday's terrorist attack in Suruç, Şanlıurfa killed at least 30 people and wounded more than 100. Irrespective of which group or groups are to blame, the real culprits are those who allowed the region to degrade so far. This attack targets humanity itself, and we condemn terrorism in all its forms.

This terrorist attack, similar to the 2013 attack in Reyhanlı that had killed 52 people, is an act of retaliation against Turkey's commitment to fight terrorism, which in its turn is fed by the chaos in the region.

The four-year civil war in Syria, coupled with the frail state of Iraq, poses a clear and present danger to Turkey's security, which Monday's attack once again demonstrated to the entire world. It is no accident that Suruç is located just across the border from Kobani, Syria. When the Islamic State of Iraq and al-Sham (ISIS) attacked Kobani, Turkey rescued several tens of thousands of its residents from certain slaughter by providing them with shelter and allowed peshmerga forces from the Kurdistan Regional Government (KRG) to cross its territory to assist pushing back the terrorist group.

As the current state of Syria and Iraq prove, any unilateral action is destined to fail and cause further grief. Efforts by regional and global powers until now have resulted in nothing but the deepening of the ethnic and sectarian divides in both countries.

The Turkish government sees ISIS, the Assad regime and other extremist groups spreading terror in Syria and the rest of the region as a direct threat to its security. With rival powers pulling local groups in differing directions in line with their own national interests, Syria faces a real threat of a break-up.

Turkey's commendable open-door policy vis-a-vis Syrian and Iraqi refugees carries a huge financial and security cost. With constantly rising security threats, its allies need to listen a little more closely to concerns raised by Turkey, which has been on the receiving end of terrorist attacks for decades and knows how such threats need to be tackled.

Turkish security forces need to be vigilant to shield the country from violence emanating from its southern neighbors. Authorities also need to find those responsible for Monday's attack as soon as possible.

Turkey doesn't have the luxury of pontificating from afar, as some of its allies do, on how to deal with the millions of people who are in dire straits across the border. What Turkey needs is a comprehensive plan by all those concerned with the future of the region. As mentioned in this column previously, the Turkish government's repeated appeals to the international community and its allies to formulate just such a strategy have fallen on deaf ears.

The U.S.-led international coalition's focus has solely been on ISIS, while cooperating with terrorist groups on the ground and ignoring the real cause behind the rise of groups like ISIS. Such a policy risks the future of both Syria and Iraq. Turkish security forces detain dozens of foreign fighters almost every week, but this does not seem to result in introspection by Western countries, which are almost exclusively the source of these dangerous terrorists.

One criticism repeatedly cited in Daily Sabah editorials is the fact that some regional powers continue to engage in policies that spark sectarian strife, ignoring the long-term costs.

Still, there are certain encouraging signs that we hope will become a turning point. Talks between Turkey and the U.S. administration earlier this month on how to tackle the threat posed by the chaos in the region are a step in the right direction and seem to have resulted in a mutually satisfactory agreement, which needs to be promptly implemented. Let's hope the understanding reached will translate to real progress on the ground to the benefit of Syrians and the people of the region. The train-and-equip program for members of the internationally recognized Free Syrian Army is one such plan to legitimize the moderate forces on the ground, while pushing extremists to the fringe while securing the integrity of Syria.

All in all, everyone needs to approach the issue in a responsible manner.

Politicians in Turkey should not make reckless remarks before the entire truth comes to light nor should they exploit the attack to provoke an ethnic or religious rift. What we need is to grieve for the lives lost and ensure no such atrocity is ever repeated.
Last Update: Aug 20, 2015 10:13 am
RELATED TOPICS