People choosing Erdoğan and Davutoğlu a victory for democracy 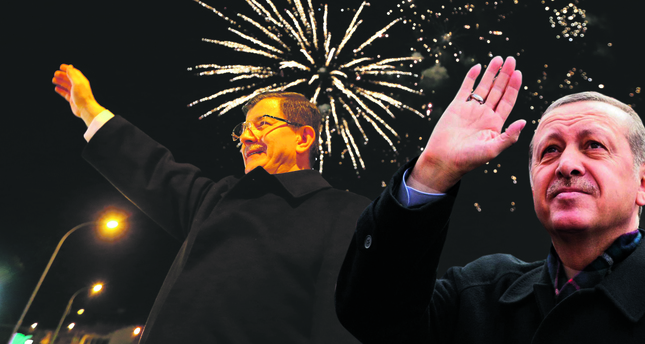 by The Editorial Board
Nov 02, 2015 12:00 am
Turkey was asked to go to the polls five months after the inconclusive June 7 elections. With an 86.2 percent turnout, the Turkish electorate once again overwhelmingly showed its passion for democracy. A peaceful atmosphere dominated the polls and Turkey's ability to hold free and fair elections was proven again.

The Justice and Development Party (AK Party), which had won the last election without securing a parliamentary majority, was yesterday able to return with the necessary number of deputies to form a single-party government. While the official results will be announced in the following days, the other parties that passed the 10 percent national election threshold were the Republican People's Party (CHP), Nationalist Movement Party (MHP) and Peoples' Democratic Party (HDP).

It is apparent that the electorate, after witnessing the failure of coalition talks following the June 7 elections and angry over the waste of time, decided to return its support to the AK Party. AK Party supporters who failed to turn out to vote in the June 7 elections and voters who opted for stability and economic growth were the main cause behind the sudden rise in the party's support. It is obvious that the government's commitment to fight the threat posed by the Gülen Movement also had a part to play in yesterday's results. The public supports the comprehensive criminal investigations into the shadowy group.

It is obvious that the results also show the nation's high expectations of the AK Party government for stability and reforms. The new government has received a strong mandate from the people to tackle the key problems facing the country. They are demanding the AK Party push forward the reform agenda it has been following since it first came to power in 2002. They see the AK Party as the proper conduit for improvement in social peace, transparency, institutionalized democracy, the culture of accountability, human rights and freedom.

The widespread campaign waged against President Recep Tayyip Erdoğan by Western media and editorials calling on the electorate not to vote for the AK Party that appeared in newspapers such as The Independent and The Economist were proven ineffective. It is obvious that they have no credibility in the eyes of the Turkish public. Turkey is not a society shut out from the world. Turkey, a young and dynamic country with a large, young, social media-savvy population, is not estranged from the world. The Western media is guilty of ideological blindness and bad journalism. Believing what Gülen Movement operatives and so-called White Turks, who are nothing but a narrow group of intellectuals estranged from much of the voting public, had to say about what is really going on in Turkey was the main cause behind their biased coverage leading up to Nov. 1. Western media outlets should stop confusing wishful thinking with analysis. The public closely follows what is being said about their country in the international arena. The one-sided and totally negative campaign waged against Turkey backfired. Those who tried to turn yesterday's elections into a vote of confidence on Erdoğan have seen what the public truly thinks.

Western media outlets also follow a narrative that is contrary to their governments' policies. Turkey is closely allied with the U.S. and most EU member states. At a time when the European media is openly hostile to Erdoğan, European leaders, including German Chancellor Angela Merkel, are lining up to discuss with him ways to improve cooperation on a range of issues. Europe needs Turkey's help to resolve many problems, including the refugee crisis. These media outlets are either totally oblivious to what is happening in the real world or they should direct their criticism at their own governments that are actively seeking Turkey's friendship. Turkey and the EU are trying to find ways to strengthen bilateral ties, and yesterday's results, which will allow a stable interlocutor in Ankara, will please many European capitals. A strong Turkish government will provide a stabilizing influence in the region.

While Daily Sabah is pleased that the HDP entered Parliament, the results should also provide a lesson to all opposition parties. The HDP's failure to distance itself from PKK terrorism, the MHP's intransigence after the June 7 elections and the CHP's failure to inspire the public were in evidence yesterday. Their failure to adequately provide a sound voice in opposition was the main reason why they were punished by the electorate. The responsibility for this defeat lies with their leadership, and HDP Co-Chair Selahattin Demirtaş, MHP Chairman Devlet Bahçeli and CHP Chairman Kemal Kılıçdaroğlu need to make way for a new and dynamic leadership that will bring much-needed vigor to the opposition in Turkey.
Last Update: Nov 02, 2015 1:58 am