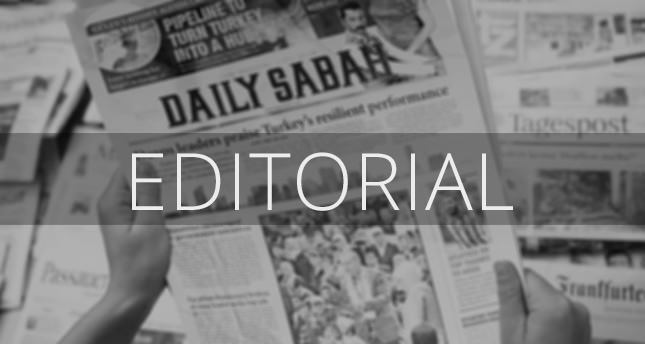 by The Editorial Board Apr 21, 2016 12:00 am
When Barack Obama, community organizer and U.S. senator, won the 2008 presidential election, many people around the world breathed a sign of relief. George W. Bush, whose presidency had been extremely polarizing at home and dangerously stressful for U.S. allies, was finally over. Taking over the White House, Mr. Obama effectively pledged to strengthen Washington's ties with his country's allies in the Middle East and elsewhere. To be clear, U.S. allies welcomed the opportunity to work with the incoming president to address pressing problems. It was not just history in the making but also order being restored to the universe. Eight years later, foreign leaders and disgruntled masses around the world are starting to admit that the Obama presidency wasn't all that it was cracked up to be.

For U.S. allies in the Middle East, including Turkey, the Obama years have been unkind. Gone were the days of W's unilateral interventionism and trigger-happy counterterrorism experts. Instead, we got stuck with an administration that was more interested in photo-ops and skillfully-crafted speeches than the dirty work of ruling the world.

In 2009, President Obama traveled to Cairo to deliver a historic speech titled "A New Beginning" - which, in retrospect, should have been called "The Beginning of the End" - and told the Muslim world that "America does not presume to know what is best for everyone." Apparently, what he meant was "America does not care anymore." When the Arab Spring began, the Obama administration dropped the ball and let violent extremists hijack a revolutionary moment because Washington policymakers were not interested in helping nascent democracies build sustainable institutions.

Three years later, President Obama appeared in front of the White House Press Corps. The Assad regime had just used chemical weapons in Ghouta, an opposition-controlled area in the suburbs of Damascus, to kill up to 1,729 innocent civilians. "We have been very clear to the Assad regime, but also to other players on the ground," he said, "that a red line for us is we start seeing a whole bunch of chemical weapons moving around or being utilized. That would change my calculus. That would change my equation." The rest, as they say, is history. The Assad regime, in cooperation with Vladimir Putin's Russia - which decided to jump into the Syrian quagmire when Mr. Obama proved inadequate and uninterested - continues to kill Syrian people.

The same thing happened in the Asia-Pacific, where the United States virtually turned its back on Japan in the face of the China threat.

U.S. allies (and adversaries) soon realized unilateral interventionism had been replaced with hardcore isolationism. The Obama administration was not only uninterested in addressing pressing problems in the Middle East and elsewhere but also unwilling to cooperate with U.S. allies comparing with the Bill Clinton administration taking action on the Kosovo conflict in 1999.

Turkey, which offered to create and enforce a safe zone in northern Syria - a plan that would have solved the refugee crisis and pushed DAESH away from the Turkish-Syrian border - was repeatedly turned down. To make matters worse, the Obama administration effectively ignored the Russian intervention in the Syrian civil war and told Turkey to deal with the Russian threat alone after a Russian military jet was downed upon multiple airspace violations. In retrospect, it was probably unfair to expect Mr. Obama, who last week stood idly by as Russian jets buzzed U.S. ships and planes, to stand up for Turkey. U.S. inaction, coupled with Mr. Obama's willingness to ignore Iran's sectarian and destabilizing policies for the sake of finalizing the nuclear deal, leaves Washington's allies no choice but to stick together and form new alliances to discourage future attacks. In recent months, Turkey and Israel have been working on an agreement to restore diplomatic relations and leave the Mavi Marmara assault behind. Meanwhile, Turkish President Recep Tayyip Erdoğan extended a welcome to King Salman of Saudi Arabia during an official visit last week. Moving forward normalization between state institutions of Turkey and Egypt might be in the cards. All in all, Turkey, Saudi Arabia and Israel are no longer under expectation of any kind from Obama's failed administration in the region.

The next U.S. administration will find itself in a tough position when a new president takes over the White House in January 2017. Even if they try their best, the ship may have already set sail.
Last Update: Apr 21, 2016 9:39 am
RELATED TOPICS