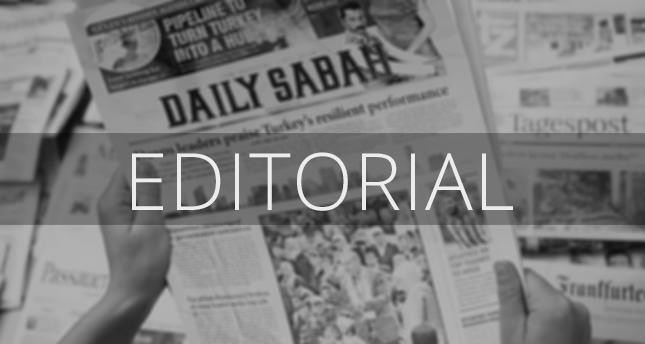 by The Editorial Board Oct 13, 2016 12:00 am
Meeting in Istanbul on Monday, President Recep Tayyip Erdoğan and his Russian counterpart Vladimir Putin signed a historic agreement to launch the Turkish Stream, a natural gas pipeline that will deliver Russian gas to Europe via Turkey. Just a few months ago, the project was considered dead in the water: Turks had downed a Russian jet over airspace violations and the Kremlin was trying to hurt the tourism industry in Turkey. There was even talk of a violent escalation between Ankara and Moscow. If you ask the same experts, something much worse happened: Turkey and Russia kissed and made up.

To be clear, the Turkish-Russian rapprochement has been largely limited to energy and economic cooperation. Since Mr. Erdoğan's visit to St. Petersburg, Russian tourists have come back to the Turkish riviera, as import restrictions on Turkish agricultural produce were largely lifted. What the United States and others are worried about, however, isn't Turkish tomatoes. It's that improving ties between Ankara and Moscow could translate into closer cooperation on political challenges including the Syrian crisis.

U.S. officials have not gone to great lengths to hide their dissatisfaction with Turkey's rekindled friendship with Russia either. For many Turks, the irony is that it was the same spokespeople in Washington who urged the Turkish leadership to reach out to the Kremlin - which, Secretary of State John Kerry thought, would play ball. To make matters worse, Washington ignored repeated warnings that steps taken by the administration would place Turkey's vital interests at risk. In the end, the Turks turned to other partners to protect their interests.

To be clear, it remains unlikely Turkey and Russia will reach an agreement over Syria and the future of Bashar Assad anytime soon. While the Turks maintain that there can be no lasting peace in Syria unless Assad is removed from power, the Kremlin recently doubled down by joining the regime in bombing Aleppo, where airstrikes have resulted in large casualties. Likewise, the Turkish leadership has major differences of opinion with the Russians on Crimea and Egypt.

The United States needs to correctly identify its national interests in the Middle East and act accordingly if they would like to be taken seriously by regional actors. Meanwhile, the Turks made it clear that they have absolutely no intention to waste precious time with Washington. Speaking at the World Energy Congress last week, the Turkish President called for an end to indiscriminate attacks on Aleppo - with Mr. Putin just 10 feet away. It was a symbolic gesture to make it clear that Turkey was not backtracking on Syria. But Turkey's policy should only serve as a warning sign of how bad the Obama administration hurt U.S. interests around the world.

Mr. Obama's isolationist foreign policy, coupled with his administration's mismanagement of the Syrian crisis, alienated the Turkish leadership and forced Turkey to search for alternative partners. To be clear, the Obama administration repeatedly urged Ankara to kiss and make up with Moscow when the Russians were still playing ball with U.S. Secretary of State John Kerry - who, at the time, refused to accept that he had deteriorated yet again.

In recent years, U.S. allies around the world - Turkey, Japan and Israel, among others - felt that Washington was no longer a reliable friend. In the Middle East, Mr. Obama rewarded Iran for going rogue and breaking every rule in the book, while taking shots at regional allies in front of the cameras. In Asia-Pacific, the Obama administration failed to support Japan against China and last month congress voted for an act that permits families of the victims of 9/11 attacks to sue Saudi Arabia. Democratic presidential candidate Hillary Clinton announced that she would provide weapons and ammunition to YPG, the PKK's Syrian franchise, as part of the anti-Daish campaign.

The next U.S. president might enter the Oval Office only to find out that her country has no allies left in the Middle East thanks to Barack Obama's short-sighted policies.

In response, Turkey pursued a policy of diversification in the international arena to learn to work with a large number of partners to address pressing problems and pursue its goals. Instead of relying on Washington, the Turks reached the conclusion that the most effective way to address regional challenges was to promote regional cooperation. Keeping in mind that Turkey isn't alone, the United States will presumably pay the price of Mr. Obama's ambitions and disloyalty by facing growing isolation in the region.

The way out of the current crisis is clear: The next president must overhaul foreign policy to win back hearts and minds in Turkey and other frustrated allied nations. Unless Washington corrects its course, Ankara's cooperation with Moscow will only mark the beginning of a dangerous trend for American interests on the ground.
Last Update: Oct 14, 2016 12:20 am
RELATED TOPICS