Tablets to students to improve quality and productivity 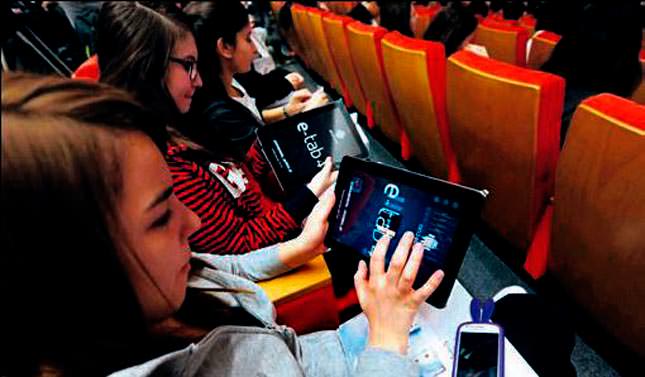 The Turkish government led by the Ministry of National Education, puts the FATIH project into practice, granting secondary school students with free tablets to use at home and in the classroom. 84,921 interactive boards and 62,800 tablets were presented as gifts to young aspiring students thus far, providing equal opportunity in education and training.

The Ministry of National Education (MEB) is working with WESTAR to conduct a project named FATIH (Movement of Enhancing Opportunities and Improving Technology) with the intention of giving the young minds of Turkey a head start in life. The project was launched in 2010 with the hope that the application would be in its early stages by 2014.

Timur Sırt, technology editor from Sabah newspaper, reported that the first stage of the project will be aimed at high school students with the ministry envisaging 1.2 million students and 100,000 teachers using tablet PCs in their class room, allowing them to access information at a rapid pace.

"This project will give the less fortunate an opportunity that they may not have had otherwise. It puts all students on an even playing field."

With 17 pilot cities receiving 8,500 tablet PCs distributed between 52 schools between 2011 and 2012 alone and a further 49,000 tablets provided to 217 schools in 81 provinces in 2013, it is safe to say the project is rather successful thus far. 84,921 interactive boards have been installed in classrooms along with 62,800 tablets that have been granted to teachers and ninth grade students.

According to the data from the ministry, the number of students using tablets in class applications has risen to 41,172 as of 2013, while the number for teachers is 7,528. Among the goals of the ministry for 2014 is to increase the number of contents for the interactive boards to 18,500. MEB will invest a source of TL 1.37 billion for the FATIH project. Sırt further expressed his excitement for the project by stating, "This is a project that is filled with hope for the future of our children. No other country has undertaken a project of this scale. It increases the level of productivity within the classroom while improving the quality of education."